The benefit of idling stop systems is obvious. The start-stop feature not only cuts fuel consumption by 10 to 15 percent, but also reduces emissions accordingly. With fuel efficiency ranking at the very top of param-eters that consumers consider when buying a car, engine start-stop has become the norm for original equipment manufacturers (OEMs) today. According to IHS Automotive, almost 70 percent of cars driving in Europe (where gas prices are highest) have the start-stop capability on board. But adoption is far behind the curve in other, less urban-ized areas of the world, including the United States, with only seven percent of cars equipped, and many owners turn the feature off when they have it. 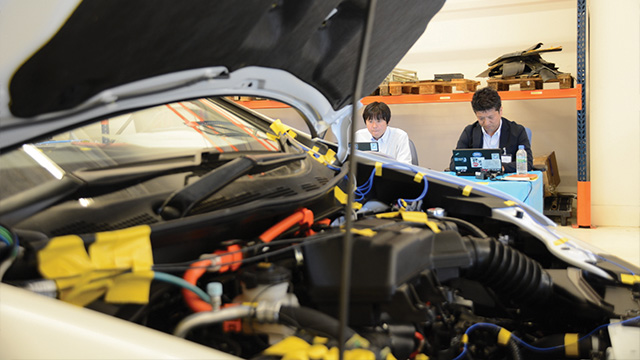 Honda and Siemens have been partners for decades, specifically through the use of Simcenter™ products and services. In fact, Honda has been a devoted and satisfied user of Simcenter SCADAS™ data acquisi-tion hardware and Simcenter Testlab™ software for more than 20 years. 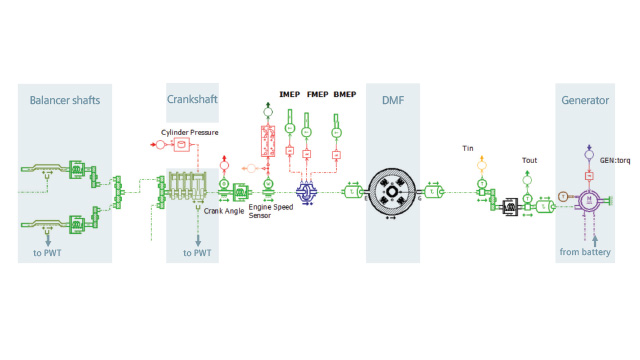 From test, through engineering consult-ing to system simulation

Mr. Satoshi Watanabe, responsible for Model-Based Development (MBD) at the powertrain NVH department at Honda, explains how Simcenter testing tools far exceeded competitor alternatives long ago: “The Simcenter testing tools were multi-purpose; they allowed for transfer path analysis, impact testing, modal analysis and others, whereas the competi-tion was still focused on performing just a single task.”

With this versatility, Honda was able to optimize their testing processes signifi-cantly. “There was no more need to change the test setup and specialist between measurements, losing precious time,” Watanabe explains. “Overall, thanks to the Simcenter tools, our testing process became much more integrated.” Honda is still using Simcenter testing solutions for data acquisition and validation today.

Working with the Simcenter testing equip-ment, Honda accumulated a lot of in-house know-how, especially with regards to NVH. The company currently has this knowledge organized into differ-ent operational departments, each pursuing their specific sets of targets. This was the most effective approach to tackle the attribute- and subsystem-specific challenges of vehicle development. But with the advent of hybrid vehicles and their more complex NVH concerns, the company decided to review the depart-mentalized approach.

“Before we started developing hybrid vehicles, we were doing fine with our established processes and knowledge-base,” Watanabe says. “However, we want to explore new ways to shorten our devel-opment cycle.” Upon encountering the engine restart NVH issue in their Odyssey platform, Honda decided to implement other Simcenter solutions, and to contact Simcenter Engineering services. Simcenter Engineering would help Honda to couple their valuable but compartmentalized knowledge into an integrated solution approach. 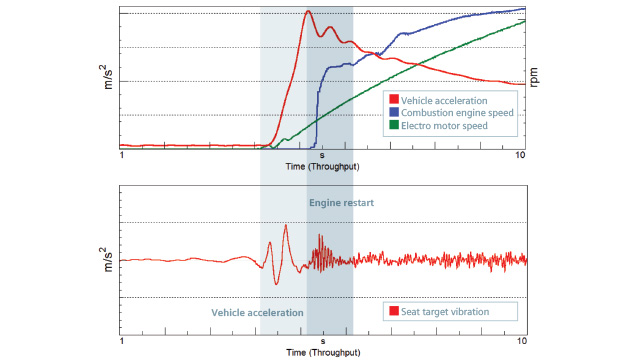 Due to the psychological and largely subjective factors at play, the restart issue is more intricate than science would lead one to suspect. Typically, when an engine starts, body vibrations are caused by the rigid body eigenvalues of the power plant during initial combustion. The difference between normal start and restart however, is that we expect these vibrations to occur in the former case. While expectations are difficult to objectify and therefore general-ize, the only effective strategy seems to be to reduce restart vibrations to their abso-lute minimum, without compromising engine performance.

Conventionally, prediction of noise and vibration phenomena from the powertrain uses a method that inputs the measured in-cylinder pressure values as a source of engine vibration. “However, departing from a fixed in-cylinder pressure value, these models do not consider the param-eters for engine cranking and firing, which contribute greatly to engine restart vibra-tion,” says Tom Van Houcke, a Simcenter NVH expert closely involved throughout the project.

Honda appreciates more than the success-ful completion of the project today. “Thanks to our collaboration with the Simcenter Engineering team, our develop-ment cycle time is under better control,” Watanabe asserts. Moreover, after the project completion, Honda received a full technology transfer, enabling them to reproduce all the techniques and method-ologies for other purposes than engine restart vibrations. “Because of the technol-ogy transfer, we understand how to reproduce the applied techniques and adapt them to resolve all kinds of issues. We can now do this by ourselves, using our own assets to the fullest,” Watanabe concludes.

As a result, Honda is now integrating and using MBD throughout their departments, which is allowing them to anticipate a variety of issues and frontload their solu-tion. “Discussions are started earlier and thereby we avoid problems,” Watanabe says. “By predicting systems behavior upfront, the workload afterwards is signifi-cantly reduced, which allows us to focus our efforts and resources on other priori-ties, such as brand image and value.”

By predicting systems behavior upfront, the workload afterwards is significantly reduced, which allows us to focus our efforts and resources on other priorities, such as brand image and value. Satoshi Watanabe, Model-Based Development for Powertrain NVH Honda R&D Co., Ltd
S
Siemens