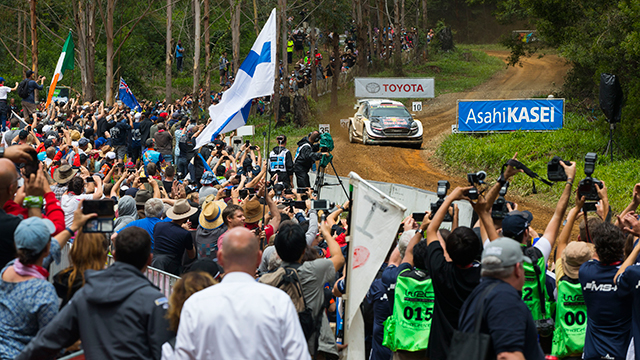 The Fédération Internationale de l’Automobile (FIA) and Siemens today announced the start of a project aimed at improving the safety of spectators and drivers at Rally events around the world.

“The FIA leads the agenda to connect motorsports and urban mobility in order to inspire change and create a transformative impact on people’s lives”, said Jean Todt, President of the FIA. “This agreement between Siemens and the FIA on a project that involves R&D at the highest level of motor sport and urban transportation technology will enable us to make racing safer and significantly influence the development of transportation in smart cities.”

“In the age of increasingly automated vehicles, racing will be an essential testbed for the automotive industry, which needs the widest array of data and the most challenging environments to continue to build and train advanced autonomous, connected and electric automotive technologies," says Edward Bernardon, vice president strategic automotive initiatives at Siemens PLM Software.

“We look forward to working with the FIA to determine how automated and connected vehicle technologies can be leveraged to make race Rally drivers and spectators safer and applying what we learn to improve intelligent infrastructure and pedestrians’ safety in urban mobility environments,” added Marcus Welz, President of Siemens Intelligent Traffic Systems in North America.

The project will explore how a combination of technologies from Siemens Intelligent Traffic Systems and Siemens PLM Software can be used to improve the detection of spectators in dangerous locations, and thus make it easier for race organizers and drivers to take preventative and/or immediate action to avoid accidents. Through this partnership, unveiled at the Geneva International Motor Show, the FIA will leverage Siemens’ expertise in chip-to-city engineering in real-world autonomous and connected vehicle applications. Outcomes from this project will directly benefit efforts to improve pedestrian safety in cities.

Last year more than four million spectators attended Rally events, which take place on stages that can stretch across more than 25 kilometers. This can make it difficult for race organizers to monitor an entire stage, which are often on relatively narrow dirt and gravel roads that cut through diverse terrain, further hampering efforts of drivers and spotters to watch for fans who may be in harm’s way.

The first step in solving this problem is creating an advanced 2D and 3D simulation using vehicle and trackside arrayed sensor-based systems deployed on Rally stages. These systems include:

In addition, the unique combination of FIA and Siemens expertise, honed in the extreme environment of racing, will accelerate efforts already underway to make city roads safer.

The Fédération Internationale de l’Automobile is the governing body of world motor sport and the federation of the world’s leading motoring organisations. Founded in 1904, it brings together 240 national motoring and sporting organisations from more than 144 countries, representing millions of motorists worldwide. In motor sport, it administers the rules and regulations for all international four-wheel sport, including the FIA Formula One World Championship and FIA World Rally Championship.

Siemens AG (Berlin and Munich) is a global technology powerhouse that has stood for engineering excellence, innovation, quality, reliability and internationality for more than 170 years. The company is active around the globe, focusing on the areas of electrification, automation and digitalization. One of the largest producers of energy-efficient, resource-saving technologies, Siemens is a leading supplier of efficient power generation and power transmission solutions and a pioneer in infrastructure solutions as well as automation, drive and software solutions for industry. With its publicly listed subsidiary Siemens Healthineers AG, the company is also a leading provider of medical imaging equipment – such as computed tomography and magnetic resonance imaging systems – and a leader in laboratory diagnostics as well as clinical IT. In fiscal 2018, which ended on September 30, 2018, Siemens generated revenue of €83.0 billion and net income of €6.1 billion. At the end of September 2018, the company had around 379,000 employees worldwide. Further information is available on the Internet at www.siemens.com.