Ideally, we wanted to simulate in 3D, but then we decided to use the 2D capabilities of Simcenter MAGNET so the design optimization would go really fast. FNU Nishanth, PhD student University of Wisconsin-Madison
ЗАДАЧИ ФОРМУЛА УСПЕХА РЕЗУЛЬТАТЫ

The Wisconsin Electric Machines and Power Electronics Consortium (WEMPEC) is a technology center at the University of Wisconsin-Madison. With the support of more than 80 corporate sponsors, WEMPEC researches and develops the newest technologies and techniques in electric machines, power electronics, actuators, sensors, drives, motion control, and drive applications.

Ideally, we wanted to simulate in 3D, but then we decided to use the 2D capabilities of Simcenter MAGNET so the design optimization would go really fast. FNU Nishanth, PhD student University of Wisconsin-Madison

Determining the impact of electrification

Reaching the kind of power density required for electrified heavy equipment is harder than it seems. But that hasn’t stopped an enthusiastic group of professors and graduate students from the University of Minnesota and the Wisconsin Electric Machines and Power Electronics Consortium (WEMPEC). WEMPEC is a technology center based at the University of Wisconsin-Madison (UW-Madison). Big 10 Conference rivals on the athletic field, Wisconsin and Minnesota gladly collaborate in the laboratory.

Working together on a Department of Energy (DoE) grant project, a team of electrical engineers from the UW-Madison joined forces with hydraulic specialists from the University of Minnesota to prove just how much impact electrification can realistically have on the next generation of heavy equipment. Specifically, the team is looking to improve the efficiency of a 20-ton excavator and hoping to help make off-highway and heavy equipment vehicles more sustainable and energy efficient via electrification.

“Our part of the project is to electrify the hydraulic system in the best way possible,” says Eric Severson, assistant professor and associate director of WEMPEC at the University of Wisconsin-Madison. “The idea was to try to take advantage of some of the inherent abilities of hydraulics and electric technology already on the market. The problem is that you can’t just take an electric drivetrain from a Prius or a Tesla and put it in an excavator. Electric systems have much lower power density requirements compared to hydraulic systems. You can’t even really compare them.”

The DoE project is what is known in academic circles as a pre-commercial project – which means lots of room for research and development (R&D), but the Department of Energy does like to see a path to commercialization at the end.

“These types of projects are especially interesting to WEMPEC,” says Severson. “We have approximately 80 companies that are members of the consortium and interested in this type of technology development. Eaton and several other OEMs have been involved in this project.” 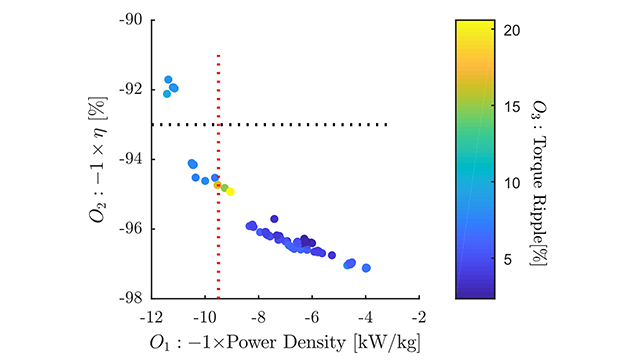 To electrify the hydraulic system, the team designed a new type of drivetrain called a hybrid hydraulic electric architecture (HHEA). As the electric guys, Severson and his PhD student FNU Nishanth, were given the challenge of integrating an electric machine into the hydraulic pump to hybridize the actuator in the excavator’s drivetrain.

“Hydraulics are super power dense, but hard to control efficiently,” explains Severson. “Our design basically switches between different pressurized hydraulic rails and uses an electric motor to buck and boost those hydraulic rails. Adding an electric motor gives you the possibility to increase or decrease the pressure with a pump and this adds extra control and efficiency to the system.”

When they started, Severson and Nishanth knew they would have to hit some tough design targets to make this work. The electric motor rating was 20 kilowatts (kW) at 15,000 revolutions per minute (RPM) based on the number of pressure rails and the actuator requirements. To reach the type of power-density level required to hit this figure, it would be necessary to have high-performance, well-designed and highly innovative components and subcomponents.

“Our project targeted a power density over 5 kilowatt/kilogram and efficiency over 85 percent for the integrated hydraulic pump, electric motor and power electronics,” states Severson. “This translates to a power density of 9.5 kilowatt/kilogram and efficiency of over 93 percent for the electric machine, what we call the HECM (hydraulic electric control module). It is a highly challenging requirement to meet.” 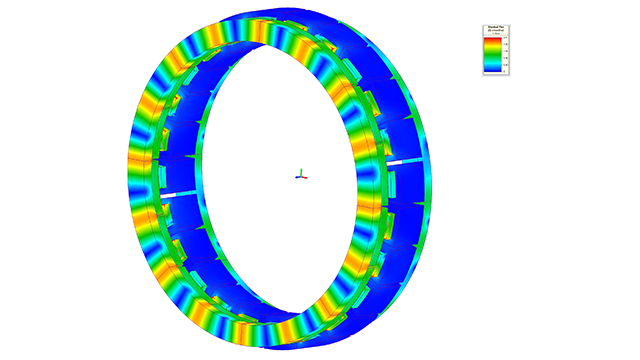 Today, the project is going into its third year and there are some pretty impressive power density stats on their way to being validated on a prototype. That being said, how did they nail those off-the-chart figures?

While the team in Minnesota was busy fine-tuning the hydraulics system, the team in Wisconsin focused on how to make a power-dense, ultra-integrated electric hydraulic pump, dubbed the HECM. The HECM’s job is to fine-tune the power levels so the main power source, the hydraulic pressure rail, can meet the vehicle requirements specifications.

“(FNU) Nishanth focused on pulling out every trick in his bag of electromechanical engineering to make that HECM as tiny and powerful as possible and for that he used Simcenter MAGNET,” adds Severson.

Nishanth simulated and optimized variations of three design options in Simcenter™ MAGNET™ software, a part of the Xcelerator™ portfolio, the comprehensive and integrated portfolio of software and services from Siemens Digital Industries (FNU) Nishanth focused on pulling out every trick in his bag of electromechanical engineering to make that HECM as tiny and powerful as possible and for that he used Simcenter MAGNET.” Eric Severson Assistant Professor and Associate Director, WEMPEC University of Wisconsin-Madison Software: a coreless machine, a yokeless and segmented armature (YASA) machine and a rotor-single stator (called the single rotor machine). The machines were compared according to the project metrics, which were power density, cost and efficiency. In total, there were 11,250 design variants to check out. 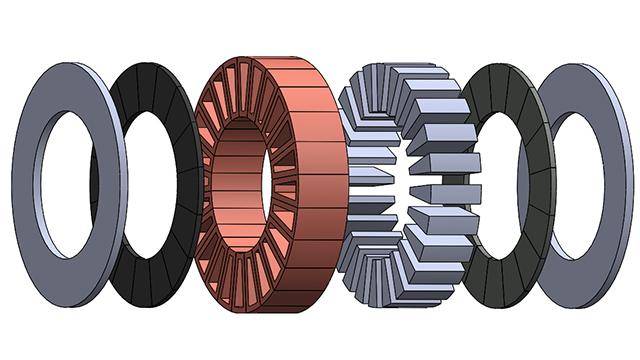 With that amount of work, traditional methods weren’t even a remote possibility. So Nishanth opted to fully automate Simcenter MAGNET using MATLAB software.

“Ideally, we wanted to simulate in 3D, but then we decided to use the 2D capabilities of Simcenter MAGNET so the design optimization would go really fast,” says Nishanth, a WEMPEC PhD student at the UW-Madison. “A 3D model takes about a day to evaluate, but we had over 11,000 designs to evaluate. It just wasn’t possible. With our 2D solution, it took about a minute per design.”

Nishanth developed scripts to link the MATLAB multi-objective optimization toolbox to Simcenter MAGNET. He did this by using the Simcenter MAGNET scripting interface. The optimization algorithm determined candidate axial flux machine designs for evaluation. These designs were defined by a set of geometric dimensions the algorithm selects, like stator tooth thickness and magnet thickness. The customized MATLAB scripts automatically used Simcenter MAGNET to evaluate the machine performance according to the main specified criteria: power density, cost and efficiency. The optimization step covered 150 generations with a population of 75 per generation, evaluating a total of 11,250 designs.

“Basically, MATLAB has an optimization library,” says Nishanth. “The library takes a design evaluation result from Simcenter MAGNET and puts it through an optimization loop to get to the next generation of the design.”

“Until quantum computers exist, doing something like this in 3D just wouldn’t be possible,” quips Severson.

Nishanth and Severson are quick to point out the software wasn’t the only reason for their success. Excellent technical support played a significant role as well.

The magic is in the optimization

According to the HECM digital twin, the final design could hit an amazing 11.2 kW/kg power density. The team had set the design goal in the ballpark of a 10 kW/kg power density based on the numbers achieved for high-performance aircraft electrification motors.

Says Nishanth, “Until we went into optimization loops, we weren’t reaching the right figures. I was just designing the motor and using rules of thumb. We weren’t getting the power densities that we wanted. Or we could get the power density, but we couldn’t get the efficiency we wanted; there were tradeoffs to consider.”

The optimization magic was finding the right best-of-both-worlds design option for both off-highway performance requirements: a power density greater than 9.5 kW/kg and machine efficiency greater than 93 percent. Using Simcenter MAGNET software made this possible. It found the right trade-off between efficiency and power density out of 11,250 possibilities, creating a digital twin that could demonstrate the single rotor axial-flux permanent magnet (AFPM ) could handle a tough job like this.

Nishanth is quick to point out the HECM is a pretty traditional machine. Affordability was a key part of the project and cost was a key driver in the design as well.

“You can reach higher power densities if you use fancy expensive materials here. We pretty much used conventional materials, like silicon-steel laminations,” he adds.

The next step for the WEMPEC team is to build the motor and prove the design work. The team at the University of Minnesota is building the pump. Together, the two teams are going to build a prototype and test it on a hydraulic test bench, which is being developed by the WEMPEC consortium as well.

“For U.S. Department of Energy projects it is important to show ‘technology by ability’,” says Severson. “This is why we need to test a prototype to validate our digital twin. We want to use the test to see that our models are correct, that we can really reach that 10 power density and then extrapolate other possibilities.”

As WEMPEC continues down the path of technology commercialization with their HECM, they will be looking into the bigger impact of hybrid hydraulic electric architecture on engineering design.

“Our HECM is really compact, but the power density is still lower than a conventional hydraulic unit,” concludes Severson. “This discovery might make more sense as a component in a broader architecture. You could talk about electrified airplanes. I could see this playing a role in other types of electrified flight as well.”