The results of the upstream project at this point – six years after the start – have lived up to the expectations, in large part because of careful planning, testing, learning and revising their procedures. Chris Smith, Senior Engineering Services, Group Manager National Instruments
ЗАДАЧИ ФОРМУЛА УСПЕХА РЕЗУЛЬТАТЫ

For more than 40 years, NI (formerly National Instruments) has developed automated test and measurement systems that help engineers solve the world’s toughest challenges. From data and automation to research and validation, NI provides the tailored, software-connected systems that engineers and enterprises need.

The results of the upstream project at this point – six years after the start – have lived up to the expectations, in large part because of careful planning, testing, learning and revising their procedures. Chris Smith, Senior Engineering Services, Group Manager National Instruments

Getting it down to one day

NI (formerly National Instruments) has taken a journey from using all manual processes to instituting some design-for-manufacturing (DFM) to embracing the benefits of DFM and planning for full adoption. Their initial use focused on using Valor™ NPI software for final DFM checks before release to manufacturing. They began implementing a more upstream DFM flow, first for focusing on part validation earlier and then integrating concurrent DFM during design. Previous methods for part validation and final DFM required an average of four to five days per new product. After moving to the new flow, they have reduced the average DFM cycle time by 60 percent to just one-and-one-half days and are adding additional coverage and anticipate it will eventually be closer to one day. 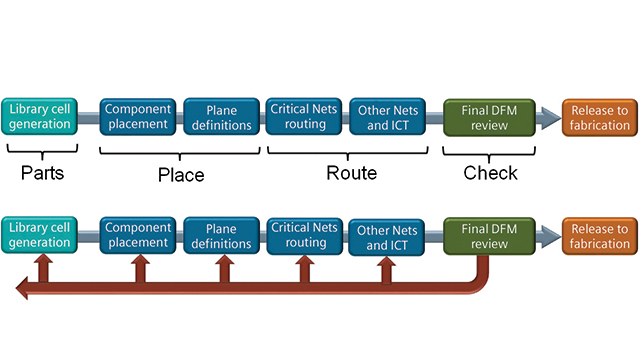 Figure 2. Running DFM at the end resulted in necessary corrections from a number of sources.

NI’s first implementation was quite similar to a number of companies’ entry into DFM software, as shown in figure 1. Like many implementations, the initial use was to execute a DFM check before releasing the design to manufacturing and correcting any manufacturing issues before release. To more efficiently use resources, they chose to make a single engineering rule file (ERF) that would apply to all printed circuit boards (PCBs). The rules were written and managed by the DFM engineers.

The result was also similar to what a number of companies have discovered. First, there was a tremendous benefit resulting from finding manufacturing issues prior to release to the fabricator and being able to correct them. That saved additional iterations with the fabricator, which was previously the case with the fabricator running DFM. However, as illustrated in figure 2, the in-house DFM check can be used to discover potential issues from all phases of PCB development prior to releasing to fabrication.

Typical errors that were discovered included part selection and creation, invalid space for components, copper and net, various mechanical and manufacturing rule nonconformities and electrical updates. Although these can be discovered in-house, the re-spins of the board required a similar engineering effort in response to issues resulting from the fabricator doing the DFM check. 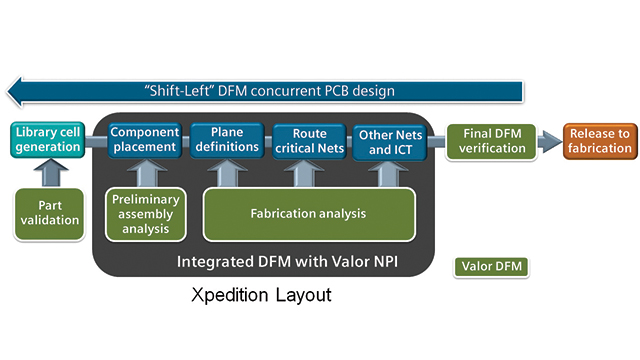 Figure 3. The new DFM flow includes executing concurrent DFM during design so issues that can affect fabrication or manufacturing will be uncovered and rectified before the design moves forward.

Although there were significant benefits to performing DFM checks before releasing it to the fabricator, errors still had to be rectified, sometimes requiring a significant amount of effort and time, especially if the error was early in the design cycle. Working with Valor, which is part of the Xcelerator™ portfolio, the comprehensive and integrated portfolio of software and services from Siemens Digital Industries Software, in 2014 NI made the decision to move the DFM upstream as far as possible, or in Valor vernacular, to “shift left.” The goal of the new DFM flow was to move DFM checks to each stage of design so manufacturing issues could be detected and corrected at that stage instead of waiting to find the error at the end of the design. The expected result was that both time and cost would be saved by fixing problems as they occurred. Figure 3 shows the complete new flow, which was executed in phases.

The first step in creating the new flow was to define DFM within the context of NI’s business needs. The resultant DFM guidelines are shown in table 1. One of the primary goals was to use their current processes and capabilities to minimize the learning curve and disruption of their existing design flow. In addition to defining the guidelines and rules, they created a set of objectives for the upstream project. Figure 4 is a representation of their four primary objectives. 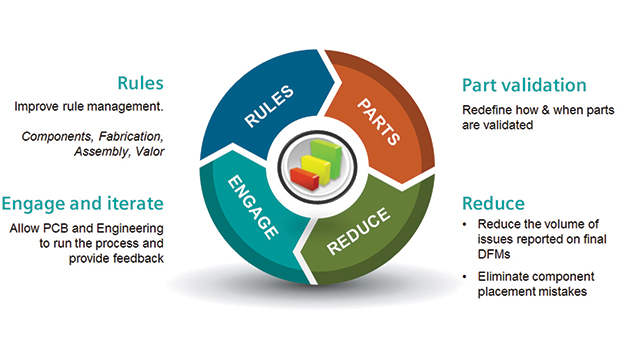 Figure 4. The four objectives of the upstream project

To maximize use of the processes and capabilities, they decided to implement their new flow in phases over time. In phase 1, they began as far to the left in the design timeline as possible: part validation. The reason for this was part errors propagated throughout the design and could affect multiple segments of the design. Incorrect part validation could result in revising the placement, which could affect layout, test and even silkscreen and solder mask. Those are costs that add significant time to the project.

Part validation with DFM was executed with Valor NPI and the Valor Parts Library (VPL), and included three objectives:

Synchronize symbols, cells and logic creation: Confirming synchronization using VPL, they were able to detect problems weeks in advance of when they would discover component issues in the previous flow.

Create a queue of new and changed parts: Using a queue, librarians could validate the new or changed parts for consistency and accuracy.

Track and define optimal/approved parts online: To realize the goals of staying current with technology and compressing cycle time, it was important to eliminate duplicate reviews of the same components and have a method to quickly identify any unverified footprints.

Using VPL allowed verification of the component definitions, including vendor part number, cell and solder profile. Among the billion-plus parts in the VPL, NI matched more than 21,000 individual components for their local library. Reducing the total to a quantity relevant to NI enabled more rapid execution of DFM checks.

Phase I began during the second quarter of 2014. As with any new tool introduction, a few members of the team were skeptical about the benefit of such a move. NI kept meticulous records of the percent of part reviews required and the project design cycle time over a period of more than four years, and the results are shown in figure 5.

“The bottom line: part reviews went from requiring 59 percent to 2 percent of the total number of components on the board, and the corresponding savings in time facilitated a 60 percent reduction in DFM cycle time as well as realizing a primary objective of reducing the number of DFM issues,” says Chris Smith, senior engineering services group manager. 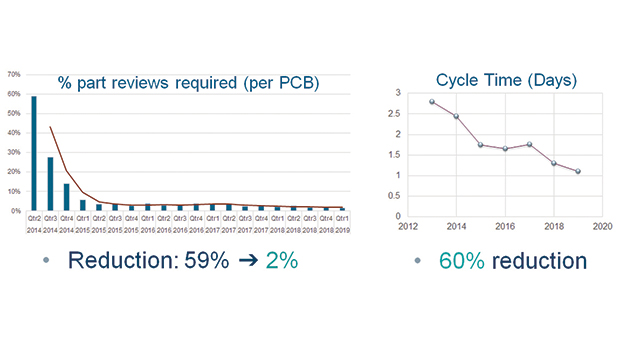 Phase II began in 2018 to move DFM into more areas of the project development cycle. The plan for phase II was to iterate and measure the impact as shown in figure 6. To maximize efficiency, the first objective was to determine the top 10 DFM issues that consume the most resources and time. This would yield the most benefit. Next, they would create a set of dynamic rule values that matched fabrication and assembly requirements, the complexity of the project and the designer’s needs. They also were not sure exactly how much reporting was optimal, so they experimented with reporting, pulling back when data was not needed or expanding the reporting if it was too vague. Finally, they would run a control case to verify that any improvements were indeed due to the distribution of DFM capabilities.

NI chose to create their rules using the Valor analysis definition manager (ADM) to take advantage of its extensive capabilities. The ADM supports both fabrication and assembly, including multiple suppliers and process requirements. The DFM engineer can select which constraint set (classification set) to use based on manufacturers’ requirements and design complexity. Classification sets can be chosen dynamically on a per-project basis instead of conforming to one general set of constraints. Plus, the ADM can be integrated with XPEDITION™ software, allowing concurrent DFM during layout.

For a control, NI created nonproduction designs with intentionally introduced manufacturing rule nonconformities to test its process. They then tested the designs and compared the results to expectations. This step allowed them to discover potential gaps in the process, which reduced the number of changes needed during implementation and improved the quality of the deployment.

Following the preliminary work, upstream phase II was rolled out with the design team as a beta test of the flow. During the year of beta testing, the flow was improved, reports were solidified and rule sets refined. Running DFM concurrently with XPEDITION, the team soon discovered this was not just another tool but could be run on demand to locate potential problems, cross probe and rectify the issue – resulting in fewer potential re-spins and late changes. At the end of phase II, upstream was ready for general use.

“The results of the upstream project at this point – six years after initial start – have lived up to the expectations, in large part because of careful planning, testing, learning and revising their procedures,” says Smith.

Figure 7 shows the complete upstream execution cycle, merging all the objectives from phase I and II.

The results of implementing the upstream initiative proved that it could detect and allow resolution of common issues during part validation and design, saving time and money compared to testing only at the conclusion of the design process. Using dynamic rules that can be selected by supplier and complexity, the volume of DFM report manufacturing rule nonconformities plummeted. As a result, there was a 60 percent decrease in DFM cycle time. 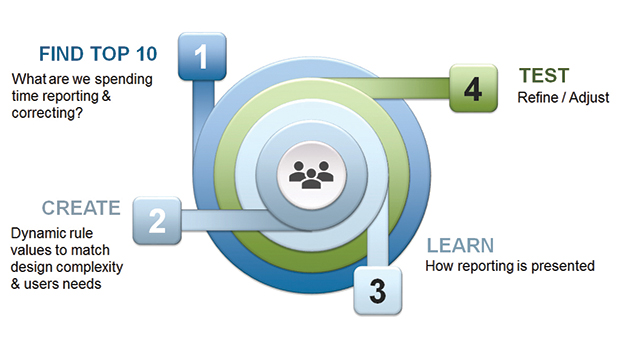 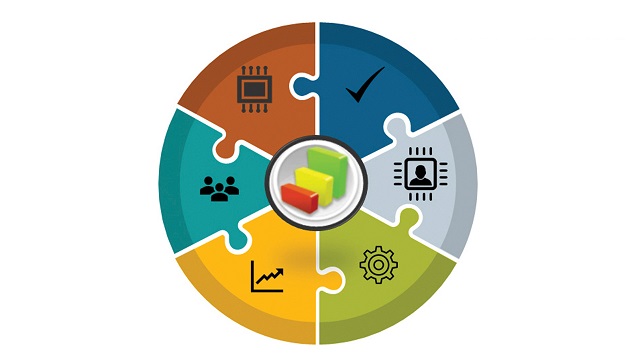