As a result of design modifications based on strength analyses using Simcenter Femap, we were able to discontinue using high-tensile steel and change to a material that is much more cost-effective and also easier to work. Franz Plainer, Project Development and Design Kässbohrer Transport Technik GmbH
Partner Highlight

Getting automobiles to customers

When a car is collected by its new owner, it has usually already traveled quite a distance. From the maker’s production lines to an importer’s regional or national distribution center, these vehicles typically travel by boat or train. From there, they get to local car dealers on specially designed truck and trailer combinations.

Kässbohrer Transport Technik GmbH (Kässbohrer) is based at Eugendorf near Salzburg, Austria, and has been manufacturing motorized vehicle transporters since 1950. The family business, established in 1893, has since become a globally leading manufacturer of these special-purpose vehicles. These account for about 90 percent of the 65 million euros per year that the 300 Kässbohrer employees generate.

“One of the key targets for the design of these vehicle transporters is an optimal load factor while maintaining top stability,” says Franz Plainer, project developer and designer at Kässbohrer. “All load bearing parts must be small, light and multi-adjustable in order to accommodate as many automobiles of all types as possible within the legally permissible clearance.” Another challenge is the ongoing trend towards SUVs and fully electric cars with growing vehicle weights and dimensions that are often kept secret by their manufacturers until serial production commences. No less important are usability and manageability by truck drivers for fast loading and unloading without too much physical strain. 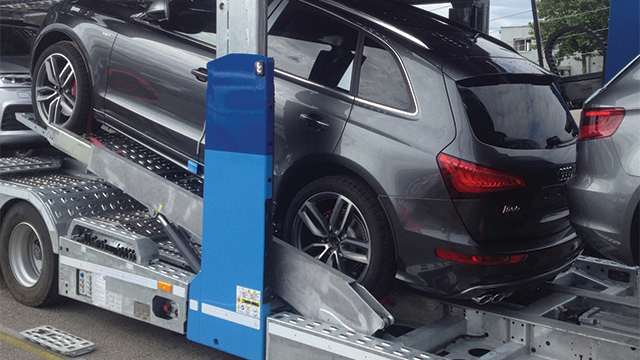 Load-bearing parts such as this loading board must be small, light and multi-adjustable, and sustain growing stresses from increasingly heavy vehicles.

All Kässbohrer transporters are fully developed at Eugendorf. For all design work, the Kässbohrer engineers have been using Solid Edge® software from product lifecycle management (PLM) specialist Siemens Digital Industries Software for many years. They appreciate the possibility of modeling directly on the solid model; sketching new elements within the 3D environment so that, with a few mouse clicks, the desired solid is generated.

For many years, however, computer-aided design (CAD) work at Kässbohrer was history-based, leaving part of this functionality underutilized. This changed radically when Solid Edge with synchronous technology was introduced. “During update training, provided by Siemens Digital Industries Software sales partner Ing. Wolfgang Hackl CAD/CAM – Consult, we were genuinely impressed by the farreaching innovations incorporated in this version,” says Plainer. “With the convenient functionality of Solid Edge, we gain considerably in speed and flexibility when creating, editing and modifying components.”

The software not only utilizes computing resources much more efficiently than previous versions, keeping the hardware safer from reaching its limits, but also offers opportunities to prevent collisions when designing mechanisms, because the components and their trajectories are fully represented in the 3D model. “This 3D collision detection greatly speeds up work and saves us the cost and effort of building one or two test models,” Plainer confirms.

The benefits of Solid Edge become even more evident when processing imported design data provided by external partners. Kässbohrer design engineers frequently use models that were created using other CAD systems, for instance in tool making and fixture construction. Importing hydraulic components and systems as well as standardized parts from manufacturers’ catalogs also calls for the multi-CAD capabilities of the software, as any loss of product quality resulting from data exchange using simpler neutral formats should be prevented.

A particularly useful feature of Solid Edge is its ability to immediately augment parts imported from outside sources with information required for further processing, using built-in tools such as automatic bore pattern recognition. “Before this, for example, we needed to remodel all radii on cast parts, which often took two hours; with Solid Edge, we now complete this work within five minutes,” Plainer comments. “With feature recognition and the automatic and correctly aligned dimensioning, Solid Edge reduces the average time required for modifying imported components by 50 percent.”

On the other hand, Kässbohrer design engineers provide their suppliers with geometric data in the form of 3D models. While data is still mainly exchanged using Parasolid® software format files, Kässbohrer plans to promote the use of the JT™ data format to facilitate visualization using viewer programs on equipment without any computer-aided technologies (CAx) software, for example, during review and approval sessions. Another new feature in Solid Edge is that the software empowers design engineers to create photorealistic renderings with just a few clicks. The visualization capability allows early consultations with customers on vehicle details without building prototypes. 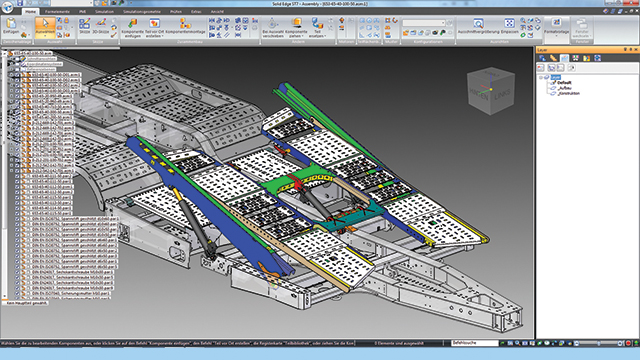 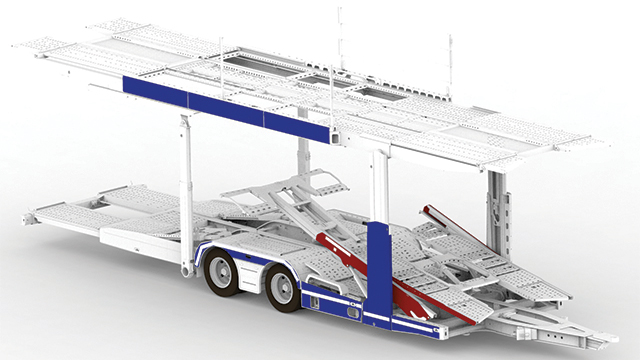 The vehicle transporters and their sheet metal parts need to withstand enormous mechanical loads in relation to their own sizes. For the verification of their strength, Kässbohrer uses Simcenter FemapTM with Nastran® software. This computer-aided engineering (CAE) analysis solution from Siemens Digital Industries Software for modeling, simulation and assessment of product properties provides design engineers with a complete toolset for strength and stress testing using finite element analysis (FEA).

All data that describes parts, assemblies or complete vehicles is transferred to the simulation software directly from Solid Edge in the form of models in Parasolid format. “To gain a representative picture of all load scenarios, we run a final simulation of the entire vehicle using Simcenter Femap in every case,” Plainer says. “With one or two million nodes, this may be a calculation operation lasting several hours, but it leaves us with correct representations of all environmental conditions for later work on individual parts.” For the truck chassis itself, a simplified imported model is used in the simulation.

For many years in the past, these calculations had not been performed in-house but were outsourced to external service providers. The simulation processes – and Simcenter Femap as the suitable software for the task – were brought back with active support from Siemens Digital Industries Software sales partner, Awotec. 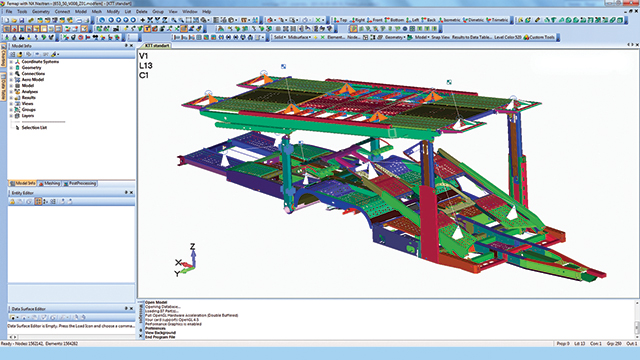 Based on surface models from Solid Edge, strength and load analyses are performed employing FEA using Simcenter Femap with Nastran. 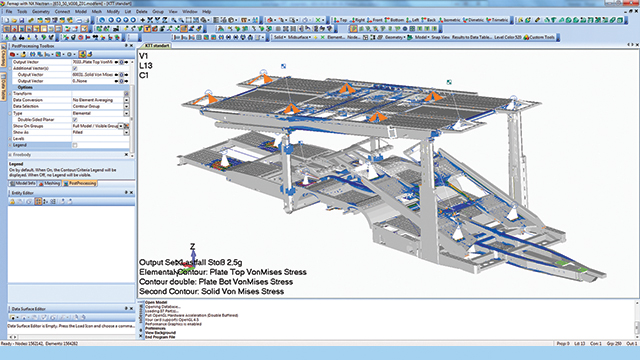 As a result of the strength analysis of Simcenter Femap, Kässbohrer design engineers were able with only minor design modifications to change from high-tensile steel to a material that is much more cost-effective and also easier to work.

In a number of projects, this proved to be the correct decision, and contributed to substantial cost savings. “During the transition of a trailer to volume production, we optimized a loading board,” Plainer recalls. “As a result of the strength analysis of Simcenter Femap, we were able, with only minor design modifications, to discontinue using high-tensile steel and change to a material that is much more cost-effective and also easier to work.”

Solid Edge design software, with synchronous technology enabling multi-CAD, in combination with the CAE software Simcenter Femap with Nastran, helps Kässbohrer meet the target of achieving an optimal load factor with uncompromised stability, and gives the company a competitive advantage.