The predictive capabilities of Simcenter STAR-CCM+ are best-in-class. We can now develop car components using CFD. When we compare the results of the complex flow field against wind tunnel data, they correlate exactly. Martin Bester, Aerodynamics Engineering Manager Hendrick Motorsports

A mere 0.002 seconds between winning and losing

Hendrick Motorsports has a long and successful track record in the world of auto racing. Operating out of a 430,000 square-foot campus in Concord, North Carolina, the team represents an important part of NASCAR history, having won 13 championships in the premier Cup Series with a roster of stock car drivers that includes Chase Elliott, William Byron, Kyle Larson and Alex Bowman. Heading into the 2020 season, they were also the most valuable racing team in NASCAR with a net worth of $315 million, according to Forbes.

Hendrick Motorsports currently fields four full-time teams on the NASCAR® Cup Series circuit, supported by more than 600 staff members. “One big reason why we have been so successful is because of the people at Hendrick Motorsports,” says Chris Haid, director of marketing services. “We don’t work in silos. We operate as a single team with four cars, collaborating and always keeping the lines of communication wide open.”

NASCAR is a highly competitive industry where speed of development and agility make all the difference. Its governing body frequently releases new competition rules, so teams need to quickly develop new concepts within the constraints of ever-changing regulations. Over time, these constraints also have become tighter and teams now face the enormous challenge of finding even the slightest performance advantages. To put this in context: the current record for the closest gap between first and second place is 0.002 seconds. This occurred during the 2003 Carolina Dodge Dealers 400 when Ricky Craven beat Kurt Busch by that margin and the 2011 Aaron’s 499 when Jimmie Johnson beat Clint Bowyer by that margin.

To overcome that 0.002 second margin, Hendrick Motorsports uses Simcenter™ STAR-CCM+™ software, a computational fluid dynamics (CFD) solution, for its aerodynamic development. Simcenter STAR-CCM+ is part of the Xcelerator™ portfolio, the comprehensive and integrated portfolio of software and services from Siemens Digital Industries Software. “With high-fidelity simulation we can gain better insight into performance in a fraction of the time and at a fraction of the cost of physical testing,” says Scott Lusted, aerodynamicist. “It lets us evaluate hundreds of designs quickly and gain a competitive edge before we even go to the track.” 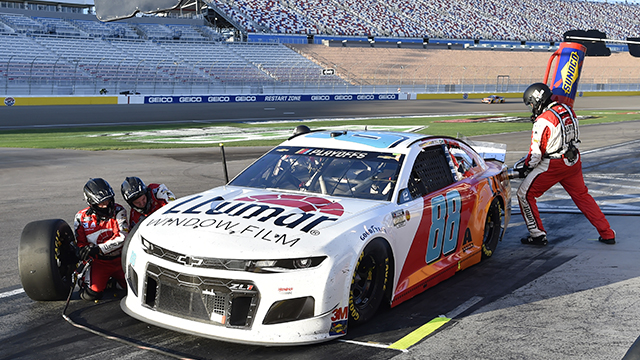 Driving down engineering time from weeks to hours

In 2015, Hendrick Motorsports needed a faster and more robust way to develop the aerodynamic packages for their cars. “We knew simulation was the key to winning championships, but we couldn’t afford for our engineers to spend their valuable time on manual tasks to make simulation work,” says Lusted. “We decided to switch to Simcenter STAR-CCM+ because of its effortless preprocessing.”

To squeeze out every bit of aerodynamic performance, engineers at Hendrick Motorsports look at every component of the car, from roof strips and spoilers to the front splitter, underbody and diffuser. Even the smallest design change can increase the top speeds that regularly exceed 200 miles per hour (MPH). This can make or break race performance.

Precise engineering is critical so all the geometrical detail must be modeled in the simulations. This can be challenging as computer-aided design (CAD) models often have hundreds of complicated parts and are riddled with gaps, overlaps and errors. The excessive engineering time it takes to prepare a large dirty CAD for the simulation has historically been one of the biggest bottlenecks in CFD.

The surface wrapper in Simcenter STAR-CCM+ was a gamechanger for aerodynamic development at Hendrick Motorsports. The name of the tool nicely defines its function: it automatically shrink-wraps dirty CAD to eliminate errors without defeaturing the geometry. The result is a closed surface that preserves the full details of the CAD and is ready to mesh with just a few clicks. This has reduced the engineering time for geometry preparation at Hendrick Motorsports from weeks to just a few hours.

“With new NASCAR rules and regulation constraints, we are under constant pressure to turn around simulations faster so that we can innovate,” says Lusted. “With Simcenter STAR-CCM+, we are able to generate CFDready geometry with near zero human interaction time, and the high-quality mesh generated using surface wrapper is just as good as something that was hand built.” 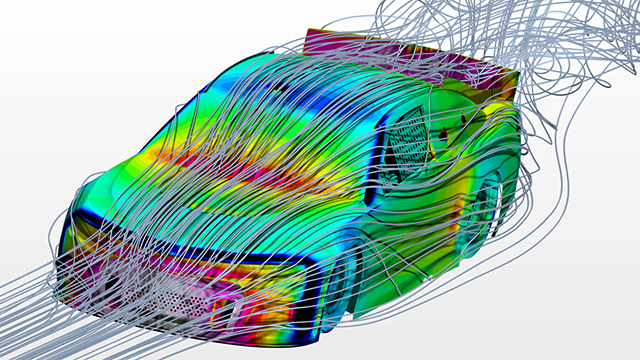 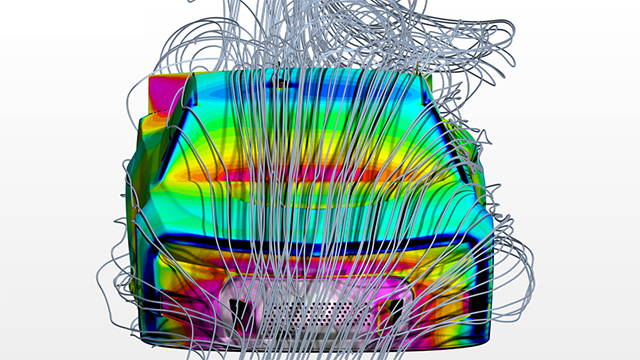 Hundreds of designs but only one checkered flag

In motorsports, performance improvements are gained with many small changes that when added up deliver the difference between winning and losing. Supporting this with simulation requires continuous evaluation of design variants, so process automation and repeatability are key. “Simcenter STAR-CCM+ is unique in that it delivers all stages of the simulation process into a single platform,” says Lusted. “This lets us completely automate the workflow from CAD to solution so that changes to a design can be evaluated with minimal manual effort.”

Hendrick Motorsports builds simulations that evolve with their designs. Once they have set up a baseline simulation, they can quickly change it with just a few clicks using the pipelined workflow in Simcenter STAR-CCM+. This facilitates quick updates to aerodynamic components, adjustments of ride heights and changes in the car’s position such as the pitch and roll during steep cornering as well as the yaw during drift.

Just increasing the thickness of a front splitter by 1 millimeter (mm) can provide beneficial knock-on effects downstream of the car and that’s exactly the kind of detail aerodynamicists are looking for.

“With automation and robust processes, our team saves 85 percent of the time setting up the CFD runs, which enables our engineers to focus on the aerodynamics rather than the process behind it,” says Lusted. 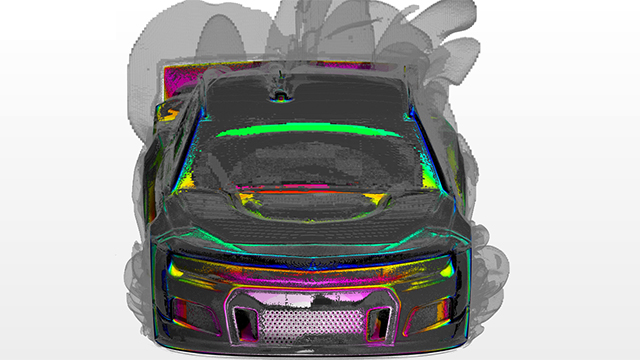 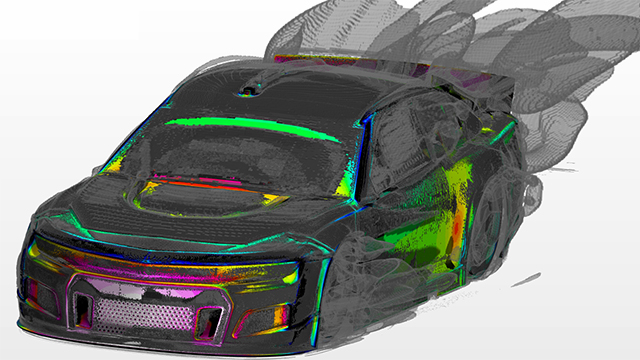 Realism in the virtual world

A 1 percent drag reduction can translate into moving up 10 positions in the starting order at a circuit like Daytona International Speedway. To find such a performance benefit with simulation, you must get the highly complex flow field of the car right. Hendrick Motorsports leverages industry-proven physics models to ensure the best possible correlation with wind tunnel data.

“The predictive capabilities of Simcenter STAR-CCM+ are best-in-class,” says Martin Bester, aerodynamics engineering manager. “We can now develop car components using CFD. When we compare the results of the complex flow field against wind tunnel data, they correlate exactly. This gives us confidence in the performance gains predicted by the simulation.”

The accuracy of modeling aerodynamics around the wheels of the car has proven to be a challenge not just in NASCAR, but in the entire automotive industry. The combination of the size, the blunt shape of the tire and the contact patch generates complex flow structures due to the air separating and inducing turbulent drag. Moreover, it is computationally expensive and time-consuming to model the region with a rotating and dynamic wheel. However, understanding this behavior provides a competitive advantage.

Hendrick Motorsports has found a solution by deploying a computationally efficient feature called a moving reference frame (MRF) in Simcenter STAR-CCM+. This provides rotation to a given region such as the wheels that mimic the physical nature of a car running on the racetrack. The results and accuracy of this approach give the team full confidence to use CFD simulation as a primary tool to enhance aerodynamic performance.

In 2015, when Hendrick Motorsports switched over to Simcenter STAR-CCM+, there was an expectation that with faster processes, more compute resources would be needed to accelerate simulation throughput. Traditional on-premise high-performance computing (HPC) easily requires an upfront investment of over $1 million; not to mention the ongoing costs for maintenance and information technology (IT). A decision was made to leverage the Microsoft Azure Cloud Platform, and by coupling the capabilities of efficient software and affordable cloud hardware the groundwork was created for future success. Watch this webinar to learn more.

“When we looked into Microsoft Azure, it was empowering to know that in two minutes we could have access to $200,000 worth of compute resources,” says Lusted. “We were able to go from almost no HPC to virtually unlimited power. This provided us the opportunity to scale our development and take it to the next level.”

Hendrick Motorsports has not looked back since switching to Microsoft Azure. During the Covid-19 global pandemic, all wind tunnel and physical testing was shut down due to social distancing measures but there was no restriction on simulation. The flexibility and ability to scale up when necessary was invaluable, particularly during uncertain times. Leveraging the cloud, their workload for running CFD cases increased by 40 percent prior to the outbreak.

Microsoft is one of the giants in industry, so they frequently upgrade their hardware. The current generation of hardware they offer is the Azure F-Series. These virtual machines can handle extreme memory loads that can accommodate the high fidelity 180-million cell count meshes for a single car. “Running Simcenter STAR-CCM+ with the Microsoft Azure cloud service is seamless,” says Lusted. “Since the start of our partnership we have never encountered an issue with running the software.” 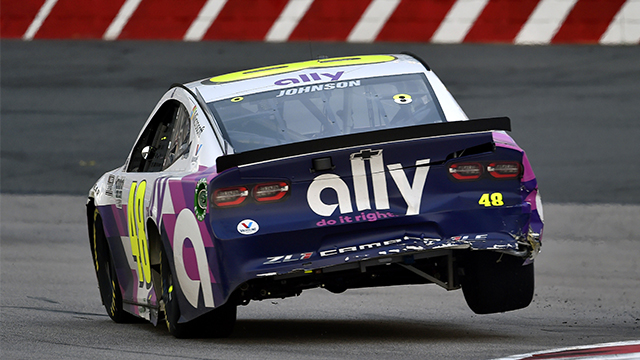 Earning the most pole positions