The major benefit that we see in using Simcenter Amesim is that it helps us improve the quality and performance of our products. Compared to 1997, we carry out more and more tests in the development process based on virtual prototyping. This leads to a better design and shorter development cycles. Andreas Klein, Senior Expert for Hydraulic System Simulation Corporate Sector Research and Advance Engineering Bosch
ЗАДАЧИ ФОРМУЛА УСПЕХА РЕЗУЛЬТАТЫ

The Bosch Group is a leading global supplier of technology and services. It employs roughly 360,000 associates worldwide (as of April 1, 2015). The company generated sales of 49 billion euros in 2014. Its operations are divided into four business sectors: Mobility Solutions, Industrial Technology, Consumer Goods, and Energy and Building Technology. The Bosch Group comprises Robert Bosch GmbH and its roughly 440 subsidiary and regional companies in 60 countries. Including its sales and service partners, Bosch is represented in roughly 150 countries.

The major benefit that we see in using Simcenter Amesim is that it helps us improve the quality and performance of our products. Compared to 1997, we carry out more and more tests in the development process based on virtual prototyping. This leads to a better design and shorter development cycles. Andreas Klein, Senior Expert for Hydraulic System Simulation Corporate Sector Research and Advance Engineering Bosch

Trendsetter for the car industry

Today, it would be difficult to find a car without at least one component produced by Bosch. Headquartered near Stuttgart in Germany, Bosch is one of the world’s largest automotive suppliers. At the cutting edge of research and development (R&D), the company is recognized as a trendsetter for the global car industry and significantly contributes to making driving increasingly safer, cleaner and more economical.

“The quality, performance and price expectations of our customers are constantly increasing,” says Sebastian Kanne, Simulation Group manager at Bosch in charge of diesel system development. “Since original equipment manufacturers’ development cycles have been drastically reduced over the last years, auto suppliers must be able to rapidly solve design issues despite the increased complexity of systems and their controls.”

“It’s difficult to figure out the financial benefit from simulation, but we believe it allows Bosch to design much better products,” says Andreas Klein, senior expert for Hydraulic System Simulation in the Corporate Sector Research and Advance Engineering at Bosch. “Before implementing the simulation approach, we didn’t have a good enough understanding of the dynamic behavior of our components and systems. I saw so many cases when we gained a better insight into the source of a problem, which enabled us to find a solution at early design phases.”

Simcenter Amesim™ software, a simulation solution of product lifecycle management (PLM) specialist Siemens Digital Industries Software, accompanied the evolution of the design process at Bosch from the very beginning of the MBSE journey. The collaboration with the Simcenter Amesim development team started in 1997.

“Since 2012, we regularly participate in early visibility tests of each new release of Simcenter Amesim. This allows us to test new functionalities on our computers with our models and configurations that cannot be shared externally, before a release goes to market.”

Today, Bosch uses Simcenter Amesim in the design process of all diesel and gasoline injection systems, as well as braking systems of both passenger and commercial vehicles. More than 300 Bosch engineers use Simcenter Amesim in different locations globally to create specific components, build up and validate simulation models, and perform multiple simulation studies.

In 2009, Bosch Diesel Systems implemented Simcenter™ Sysdm software in its European R&D centers to share, manage and re-use multiple models built not only with Simcenter Amesim but also with other simulation tools. Simcenter Sysdm enabled the company to efficiently split the simulation work between multiple R&D centers while maintaining full traceability. Simcenter Sysdm was critical to enabling workflow control by defining role-based access rights for each user. Moreover, Simcenter Sysdm helped Bosch to improve the quality of its simulation studies by enabling knowledge capitalization and proper organization of validated component and subsystem representations. 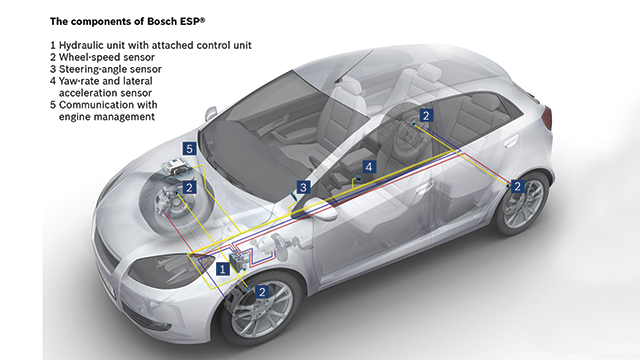 Diesel engines are widely used for commercial and passenger cars. The fuel injection system is the heart of diesel engines; it is critical for torque generation. The way the injection system delivers diesel fuel into the combustion chamber enables a clear advantage in terms of engine performance, noise characteristics and emissions. Modern diesel injection systems are highly sophisticated technology. They generate extremely high pressure, which is comparable to the force of a rhinoceros balancing on a fingertip. Additionally, the precision of modern Bosch diesel systems is unbeaten: during the blink of an eye, the system injects a small amount of fuel approximately 25 times.

When developing diesel injection systems consisting of interacting hydraulic, mechanical, signal and electrical subsystems, it is essential to use the MBSE approach in the early design phases in order to effectively reduce costs and time-to-market.

Bosch uses the mechanical, thermal, hydraulic and electromechanical libraries of Simcenter Amesim to model multidomain components of the injector, rail and pump. Simcenter Amesim helps specialists to study the dynamic subsystem and system behavior depending on the injection rate, pressure and injected fuel quantity. Using Simcenter Amesim, they also validate the control strategies of components, such as a pressure regulator.

Not only can engineers take full advantage of the user-friendly interface, detailed documentation and validated components of Simcenter Amesim, advanced users can build up their own submodels and customize fluid properties. Moreover, to analyze the interactions between multi-domain components and optimize the design, open simulation tools are critical to avoiding what otherwise is likely to become a timeconsuming and error-prone process.

“Today, we interface Simcenter Amesim with 3D multi-body software as well as other tools for controls, design optimization, electronic circuit simulation, finite element analysis and embedded control system design,” says Klein. “The goal is to build a unique process from CAD design to system integration, whereas there was a time that I could not even imagine we would be able to couple Simcenter Amesim with a CFD tool.

“Another very important advantage of Simcenter Amesim is its strong focus on numerical performance and robustness. At the end of our working day, we launch about 1,000 simulations, with Simcenter Amesim performing the analysis at night. I have never seen such a powerful tool.”

Among the examples of Siemens Digital Industries Software helping Bosch improve its simulation process is the coupling of Simcenter Amesim with a multi-body simulation (MBS) tool to design pumps. Previously, engineers struggled with a cumbersome, iterative process without direct dynamic coupling between two simulation environments. For each load case, boundary conditions, such as the pressure, were generated with Simcenter Amesim and had to be manually updated for use by the MBS tool, which resulted in high simulation costs and a long development cycle.

“By coupling Simcenter Amesim with the multibody simulation tool via FMI, we gained in efficiency of our process, improved the quality of simulation results, reduced the effort necessary for design analysis and accelerated the simulation process,” says Eric Quetel, Diesel Systems development engineer in the Engineering Center of Competence Simulation at Bosch. “Before, we had to restart the dynamic simulation for each load case, and we were not able to properly identify problems involving the system hydraulics since the input of the hydraulics models was load-case-specific. Now, only a few simulations are needed to investigate all operating conditions.”

Because Modelica supports acausal, objectoriented modeling, Bosch can easily create customized component models with the specific behavior of interest, then assemble them into complex networks. The Modelica-based power stage circuit can then be coupled with the hydraulic and mechanical subsystems from native Simcenter Amesim libraries to create a heterogeneous system model. The robust Simcenter Amesim solvers simulate the coupled system directly, without the need for cosimulation, allowing engineers to use the most suitable modeling language for their specific needs.

“The Modelica development environment of Simcenter Amesim enables Bosch to take advantage of both worlds; we are now able to use Modelica-based and Simcenter Amesim models while benefitting from the full range of powerful platform features available within Simcenter Amesim,” says Annette Geng, Gasoline Systems development engineer in the Engineering Center of Competence Simulation at Bosch. “This approach allows for stable simulation and seamless system optimization using Simcenter Amesim tools for visualization, linear analysis and design exploration.” 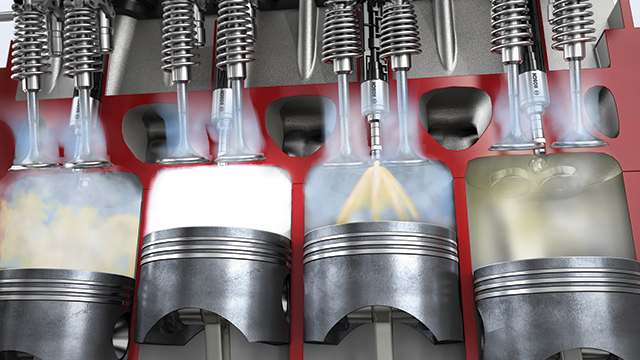 In addition to the Diesel and Gasoline Systems divisions, Simcenter Amesim has found several applications in the Chassis Systems Control division, where it helps frontload the design of increasingly complex braking systems while bridging mechanical and control engineering.

The division uses Simcenter Amesim to analyze the dynamic behavior of hydraulic, pneumatic and mechanical parts of the braking system. Simcenter Amesim is used for pre-design of the overall braking system, from the pedal to the caliper, as well as for the detailed study of components such as the master cylinder, the booster and the antilock braking system/ electronic stability program (ABS/ESP) hydraulic modulator including the pump.

Using Simcenter Amesim, engineers design the valves of the hydraulic modulator and carry out stability analysis. In this case, the coupling between hydraulics, mechanical parts and the solenoid is critical to managing different phenomena influencing valve stability.

“Simcenter Amesim is our preferred simulation tool for hydraulics applications, not only in Bosch’s Mobility Solutions but also in the Industrial Technology business sectors,” says Kanne.

“The major benefit that we see in using Simcenter Amesim is that it helps us improve the quality and performance of our products,” says Klein. “Compared to 1997, we carry out more and more tests in the development process based on virtual prototyping. This leads to a better design and shorter development cycles.”

“After 18 years of the move towards simulation, today no Bosch product is developed without simulation,” says Kanne. “Simcenter Amesim enables us to perform more and more simulations, analyze more configurations for a higher variety of our products and ensure smooth collaboration between different development teams worldwide.”