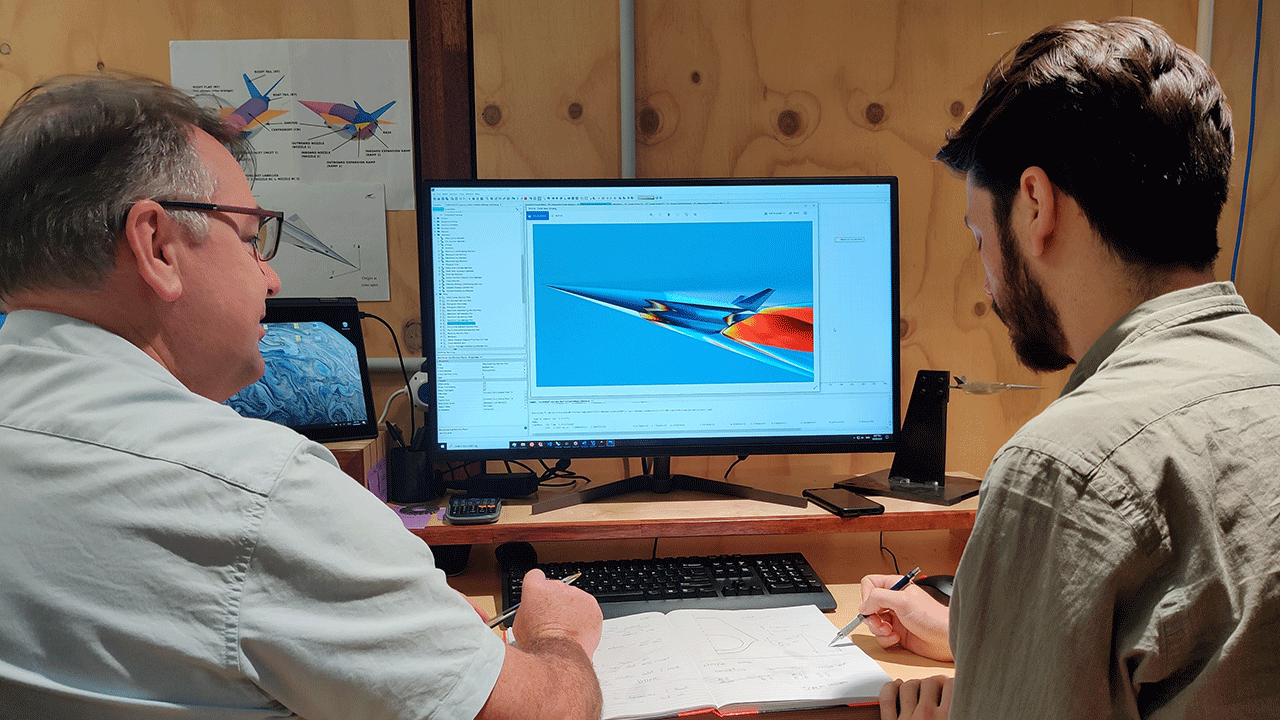 Brisbane-based aerospace engineering start-up Hypersonix Launch Systems has chosen Siemens’ Xcelerator portfolio of software to help design its sustainable and reusable hypersonic launch vehicle, Delta-Velos. Hypersonix plans to implement advanced aerodynamic and thermal modelling software from Siemens’ Simcenter portfolio, which will play a key role in building certainty and reliability of the launch vehicle responsible for placing small satellites into Low Earth Orbit once developed and in service. This is thought to be the first-time scramjet engines, lauded as one of the greatest innovations since jet engines, will be used for small satellite launch.
Hypersonix is a key player in Australia’s newly burgeoning space industry and, as part of its expansion, has recently also announced the opening of an office in Munich, Germany, also home to Siemens AG’s global headquarters. Hypersonix is developing a hypersonic, hydrogen fuelled, unmanned space launch vehicle with its minimum viable product (MVP) version expected to launch in 23 months. Hypersonix has been gaining recognition for addressing atmospheric pollution caused by increasing rocket launches globally and their innovative, green, reusable SPARTAN scramjet engines that are powered by sustainable green hydrogen fuel.
Speaking on the announcement, Hypersonix Co-Founder and Managing Director David Waterhouse said, “Software has levelled the playing field in what was previously an inaccessible space industry. We now have the access and ability to not only give sustainable and innovative ideas life using simulation technologies, but also the opportunity to work collaboratively with global companies such as Siemens and tap into their expertise in advanced software for various industries.”
Siemens’ Simcenter™ STAR-CCM+™ software will enable Hypersonix to perform multiple simulations of air-flow around its Delta-Velos launch vehicle. This will be used to simulate and digitally test the vehicle’s lift, drag and thrust, as well as the very high temperatures on its skin and structure. The software will also be used to model the complex, high-speed flows seen in scramjet engines and around hypersonic vehicles.
“Advanced simulation of this type is particularly important in the hypersonic flight regime because physical experiments are very difficult, if not impossible to perform. Everything must work on the first flight test. There is no room for error – and this digital simulation, or digital twin of the launch, means we can test everything in a virtual world and therefore achieve this high level of certainty and reliability. Simulations will enable our engineering team to perform multiple design studies to explore “what-if” scenarios and to fast-track the vehicle’s design which would normally have required many different codes involving months of work by multiple people,” added Mr. Waterhouse.
Hypersonix’s fifth-generation green hydrogen-powered scramjet engine SPARTAN is capable of accelerating from Mach 5 to Mach 12; or five to twelve times the speed of sound. The Delta-Velos vehicle that features the SPARTAN engine will fly over 2500 km before landing like a conventional aircraft on a runway.
Dr Stephen Hall at Hypersonix first applied Siemens’ Simcenter STAR-CCM+ software to automotive applications when working for the Williams Formula 1 racing team in the UK. His experiences there heavily influenced Hypersonix’ decision to adopt the software.  “The strenuous competitive requirements of Formula 1 demonstrated the ability within Simcenter StarCCM+ to model complex flows around sophisticated vehicle geometries, while performing as a practical tool for rapid design iterations,” said Dr Hall.
Siemens’ involvement in the project sees it join Boeing Research and Technology and BOC as major global companies playing a role in progressing the Delta-Velos project.
Samantha Murray, the Managing Director of Siemens Digital Industries Software for the region, said the insights gained by using Siemens’ software provides for design exploration.
“Space is no longer just the domain of governments or large corporations. We take pride in the fact that it helps start-ups such as Hypersonix realise their dream. When you are responsible for sending millions of dollars of equipment hurtling into space, you want to ensure it has been designed leveraging the same technology trusted by top aerospace companies around the world,” she said.
Last year, Hypersonix received an Accelerating Commercialisation Grant from the Australian Federal Department of Industry, Science, Energy & Resources
Simcenter STAR-CCM+ is a multiphysics computational fluid dynamics (CFD) software for the simulation of products operating under real-world conditions. Simcenter STAR-CCM+ uniquely brings automated design exploration and optimization to the CFD simulation toolkit of engineers everywhere.
Siemens Digital Industries Software is driving transformation to enable a digital enterprise where engineering, manufacturing and electronics design meet tomorrow. The Xcelerator portfolio helps companies of all sizes create and leverage digital twins that provide organizations with new insights, opportunities and levels of automation to drive innovation. For more information on Siemens Digital Industries Software products and services, visit siemens.com/software or follow us on LinkedIn, Twitter, Facebook and Instagram. Siemens Digital Industries Software – Where today meets tomorrow.
Hypersonix Launch Systems Pty Ltd ‘Hypersonix’ (Brisbane, Sydney and Munich) is an Australian aerospace design and development company. Our vision is to create the world’s leading sustainable hypersonic technology that fundamentally disrupts the way we fly to space and around the world.
Further information is available on the internet at www.hypersonix.com.au
Note: A list of relevant Siemens trademarks can be found here. Other trademarks belong to their respective owners.