The need for thermal characterization

High power modules are a key component in many of Yaskawa Electric’s (Yaskawa) products, but thermal management poses a significant product design challenge. The majority of products on the market fail because of overcurrent/overvoltage conditions, so the root cause for burnout is unknown. What is known is improvement of the thermal quality of products to reduce field failures is essential. 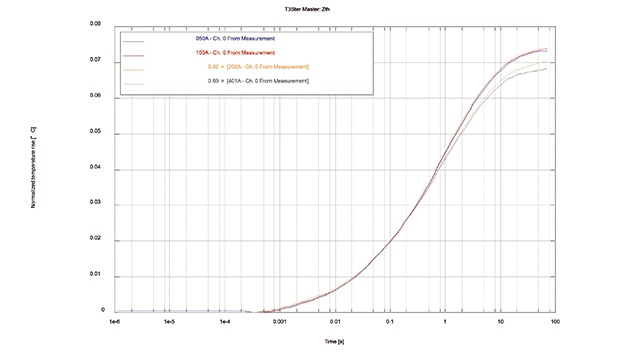 Yaskawa uses a wide variety of power modules such as insulated-gate bipolar transistors (IGBTs) and metal-oxide-semi- conductor field-effect transistors (MOSFETS) ranging from 100 amps (A) to several kiloamps (kA). One of Yaskawa’s concerns was whether Simcenter™ T3STER™ hardware could be used to measure such parts. Simcenter is a part of Xcelerator, a comprehensive and integrated portfolio of software and services from Siemens Digital Industries Software. Simcenter T3STER has a 10 volt (V)/2A range extended by voltage or current boosters, but even so it is difficult to measure kA-rated parts at full power.

To determine this, Yaskawa used Simcenter T3STER with a 400A booster to measure a commercial 800A IGBT module clamped to an in-house, water cooled cold plate, with temperature controlled by the external chilled bath.

The first task was to calibrate the transistor’s temperature coefficient (K factor calibration), which was found to be highly linear over the temperature range of interest (room temperature to 80°C/176°F). The part was measured at 50A, 100A, 200A and 400A to investigate how the thermal response varied with current. Yaskawa found that above 100A the normalized temperature versus timed responses had to be factored to get them to match in the early part of the transient (below 0.2 seconds).

Simcenter T3STER senses the die’s temperature response. At higher powers an increasing proportion of the total power dissipate occurs off the chip, in the lead wire, and wiring etc., within the module, resulting in the response needing to be factored to match the response at lower powers. As the curves match up to the point where the heat leaves the package, Simcenter T3STER can be used to test the integrity of the internal structure of the parts at lower power. As Yaskawa’s products are used in safety- critical applications, high throughput measurements during production are needed to ensure final quality. The above results show that lower currents can be used to assess and test the structural integrity of power modules. 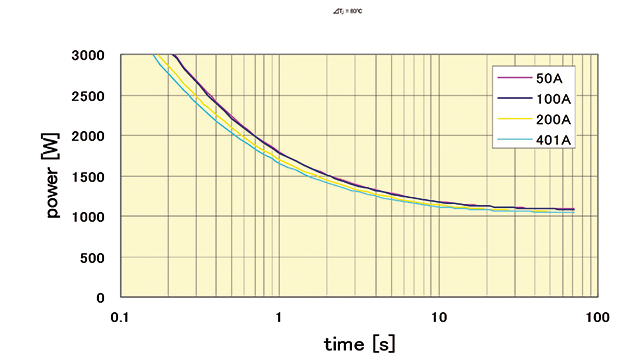 For reliability testing, parts must be subjected to thermal stress (ΔTJ, TJmax) by power cycling. One challenge is to accurately measure the junction tempera- ture (TJ) to determine the level of stress the part is subjected to. Thermography, or thermal imaging, is not suitable as the junction is located below the surface of the package. Using a thermocouple below the package is less accurate because it is measuring the case temperature, not the chip temperature. Hence it is hard to produce a desired ΔTJ to high accuracy.

To address this issue, Yaskawa again turned to Simcenter T3STER. It is possible to transpose the normalized temperature response versus time for a given power into an equivalent response showing power versus temperature for any desired temperature rise. An example for an 80°C (176°F) temperature rise is shown in figure 2.

From the graph it is possible to read off a combination of power and duration that will give a junction temperature rise of 80°C (for example, 1,500W for 2 times as shown on the graph). Simcenter T3STER therefore allows power cycling measure- ments to be accurately planned.

Another issue that Yaskawa faces, along with many other electronics companies, is that the material properties for thermal interface materials (TIMs) in the applica- tion can vary considerably from the data provided by vendors. Compounded by thermal properties, TIMs also vary as a result of processing. Yaskawa needed a way to check the thermal performance of the TIM material as used in the application rather than rely on values obtained when the materials are evaluated.

As Simcenter T3STER characterizes the heat flow path from the junction through to the ambient, Yaskawa realized that Simcenter T3STER could be used to charac- terize the TIM material in situ. To evaluate this use of Simcenter T3STER they studied a commercial 200A diode module mounted on a cold plate with their existing TIM, a new TIM currently under evaluation, and dry mounted without any TIM present. With Simcenter T3STER they were able to clearly show that the new TIM resulted in a 0.13K/W improvement in the total thermal resistance of the material stack up.

Yaskawa’s Reliability Technology Center has successfully adopted Simcenter T3STER. For the first time this provides the ability to measure chip temperatures directly, allowing them to verify that the design values for thermal parameters are correct by directly measuring the resulting thermal resistances and capacitances. In doing so they are able to increase the thermal quality of their products.