To address such issues, JPL implemented NX™ and Simcenter™ 3D software from Siemens Digital Industries Software as an end-to-end mechanical design platform. With NX and Simcenter 3D, JPL got a fully integrated computer-aided design (CAD)/computer-aided engineering (CAE)/computer-aided manufacturing (CAM) system. This is the system JPL used to develop the mechanical portions of the MSL, including the thermal control system. 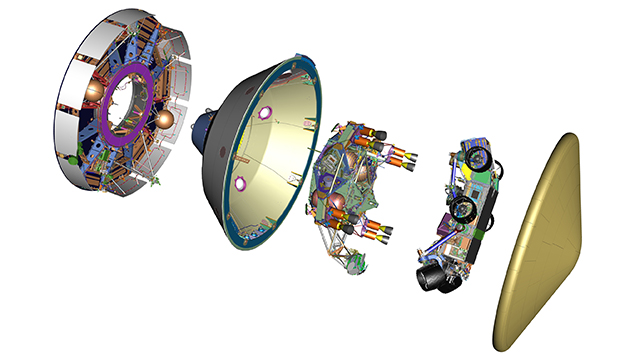 JPL’s mechanical designers modeled the entire MSL using NX. There are digital assembly models of the rover, the cruise stage and the descent stage. Analysts used the NX geometry, simplifying it as necessary, as the basis for their finite element meshes. Having design geometry and the analysis meshes in a single environment improved collaboration between the design and analysis teams and also reduced the time and effort spent creating analysis models. The integrated NX and Simcenter 3D environment also allowed the engineering teams to rapidly re-evaluate designs as the mechanical hardware evolved.

JPL engineers started with small simulations (as this was the pilot program) to validate modeling assumptions, and eventually gained confidence that their models correctly replicated the physics involved. Then they used the Simcenter 3D solutions for thermal analysis to simulate a variety of physical effects, such as fluid flow in the Mars rover, heater control of the propulsion system, and solar loading of the cruise stage. Analysis results were used to update the design geometry. The ease and efficiency of going from the design to thermal analysis and then back to update the design geometry accelerated the development of the MSL’s thermal control system considerably. Saving time and keeping to the schedule was critical, although an equally important benefit of using Simcenter 3D was the ability to evaluate the thermal control system’s performance under conditions that JPL could not simulate with physical testing.

In addition to tighter design-analysis integration, use of Simcenter 3D enabled integration between different types of analysis, such as thermal and mechanical distortion and stress analysis. Prior to adopting Simcenter 3D, engineers would have run a thermal solution and then manually mapped temperatures to the structural mesh. Use of Simcenter 3D eliminated this manual process.

Use of Simcenter 3D also enabled easier access to multiple types of analyses. For example, designers also needed to know whether any moving components would interfere with any other components or rover operations. This would have been very difficult to determine by looking at static drawings or digital models. Using Simcenter 3D Motion made it possible to answer questions such as these without the costs and delays of physical testing.