Hyundai Motor Company is a global corporation that has created a value chain based on automobiles, steel and construction. With about 250,000 employees worldwide, its services include logistics, finance and information technology (IT). The company’s automobile brands include Hyundai, Kia and Genesis.

Simulation was especially useful for this problem as it eliminated our need to rely on physical testing for every possible variation in cylinder pressure at different operating conditions. Ki Hwa Lee, Senior Research Engineer Hyundai Motor Company

For years, engineers have sought to understand and reduce the noise of diesel-engine automobiles. Noise, vibration and harshness (NVH) has many different causes that are difficult to pinpoint for original equipment manufacturers (OEMs) and their suppliers.

Although considerable advancements have been made to reduce the noise of diesel engines, some issues still remain. Hyundai Motor Company recently began developing an advanced approach to reducing NVH issues in diesel engines. 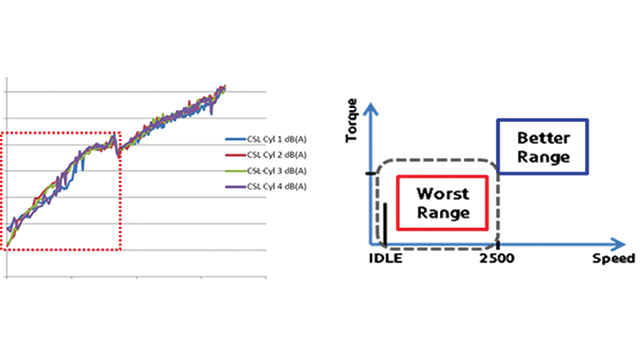 Identifying the root cause of noise

The goal was to identify the noise source in a third-generation diesel engine. Hyundai performed a series of tests and discovered an imbalance between cylinders during the combustion cycle. Two cylinders had consistently higher pressure than the others. This variation got progressively worse as the tests were repeated in the engine dynamometer (dyno), powertrain dyno and the real vehicle.

“We needed to answer the question of why the pressure varied between cylinders,” states Ki Hwa Lee, senior research engineer at Hyundai. “We knew that we would not be able to solve the noise issue without determining the cause of the peak pressure variation in the cylinders.” 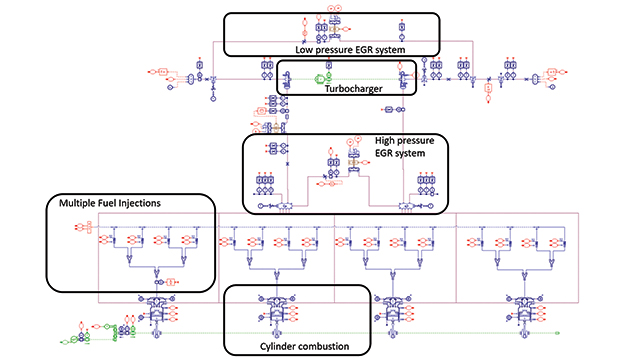 Hyundai partnered with Simcenter™ Engineering and Consulting services to determine why there was a variation of peak pressure between cylinders. First, the Simcenter Engineering team performed an analysis to determine the cause of the imbalance. The test data analysis showed the pressure between cylinders started deviating after fuel injections, leading to the cylinder imbalance, which created more noise.

A mathematical equation-based analysis of the heat-release data from physical tests confirmed that variations in fuel injection quantities between cylinders was causing the imbalance. 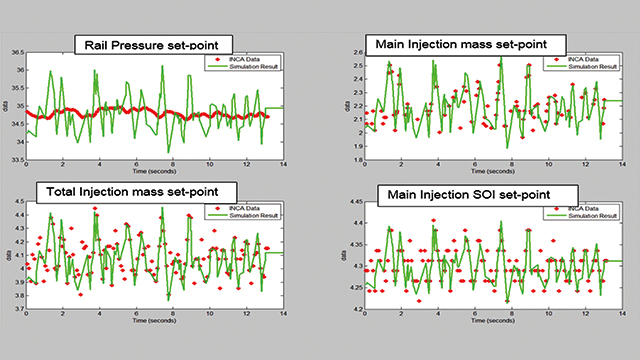 The power of simulation

Once the team confirmed the noise source was a cylinder imbalance caused by fuel injection variation, they decided that a model-based control strategy would lead them to an effective solution. By using simulation, the team could avoid costly trial-and-error with a physical prototype and streamline the process of testing.

A virtual model of the diesel engine was built using Simcenter™ Amesim™ software, which is a part of the Xcelerator™ portfolio, the comprehensive and integrated portfolio of software and services from Siemens Digital Industries Software. This model was connected to a controller so the team could view and correct the inconsistency of the fuel injection. Using Simcenter Amesim, the team hoped to gain insight into how to detect and resolve the variations in the fuel injection.

Before running the simulations, the Simcenter Engineering team needed to make sure the simulation would match real-world behavior. They performed several tests to confirm the results of the engine simulation correlated with the engine test data.

They also needed to examine other possible causes of the cylinder imbalance aside from fuel injection. Imbalances could also stem from exhaust gas recirculation (EGR) or lack of air charge circulation between the cylinders. After performing several sensitivity studies, the team concluded that fuel injection was the source of the imbalance.

Although the fuel injection anomalies were easy to correct, the team had to determine which cylinders would need to be compensated and if they needed to alter the amount of fuel. The team developed an innovative cylinder identification strategy in a controller model in Simulink.

Once they applied the controller model to the Simcenter Amesim engine model, the team analyzed and adjusted the performance of the controller. Finally, the fuel injections were regulated to eliminate peak pressure variations. 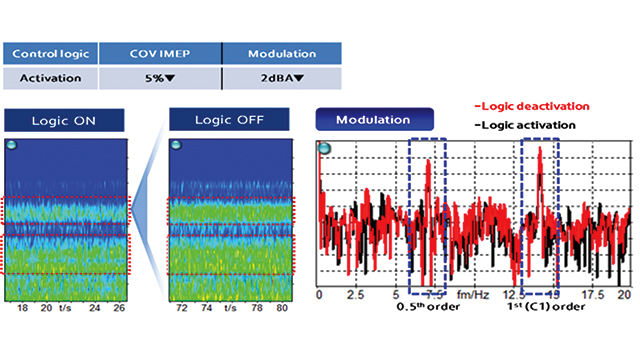 Validation of the approach

Using the models, the team produced cylinder imbalances by varying the air and fuel flow into the cylinders. “Simulation was especially useful for this problem as it eliminated our need to rely on physical testing for every possible variation in cylinder pressure at different operating conditions,” says Lee. The effect of the new control strategy was tested by running back-to-back simulations with and without the controller enabled.

“By using this new control logic, we were able to reduce the cylinder-to-cylinder peak pressure variation significantly. As a result, the sound frequency created by the engine was reduced by 2dBA and overall vehicle noise was improved by 5 percent.”

This study also improved the vehicle’s fuel economy. “The results of the simulation indicate that our control strategy is an effective method to optimize sound quality, improve NVH performance and reduce fuel consumption,” states Lee. “We are excited to use Simcenter software and services in future applications at Hyundai Motor Company.”