The speed with which Siemens turned our feedback into a viable solution was incredible. Naeem Hassan, Senior Additive Manufacturing Engineer LimaCorporate
WYZWANIA KLUCZE DO SUKCESU WYNIKI

The speed with which Siemens turned our feedback into a viable solution was incredible. Naeem Hassan, Senior Additive Manufacturing Engineer LimaCorporate

In 2005, hardly any company was thinking about using 3D printing for mass production. LimaCorporate was an exception. The Italian-based global orthopedics developer, which had just begun using the technology for rapid prototyping, couldn’t even print with the titanium it needed for its implants and was scrapping half its builds. Still, the company was determined to pursue industrialized additive manufacturing (AM).

“It was a risky decision,” admits Michele Pressacco, vice president of research and development (R&D) at LimaCorporate. “Financially, producing parts with 3D printing made no sense. But we were looking years ahead, and the only way to realize our vision was to go after it with everything we had. That’s the character of our company.”

This is the story of how a small company made a big bet on additive manufacturing, beat competitors to a major orthopedic innovation and is poised to disrupt the industry again. One key to their success was collaborating with Siemens Digital Industries Software and using its NX™ Additive Manufacturing software to reduce AM development time by 50 percent.

LimaCorporate had an important reason for jumping into industrialized AM. A big trend in orthopedics around 2005 was using lattice structures in joint replacements. These metal structures improved osteointegration – the connection between the surface of an implant and living bone. Before the industry started developing lattice-based metals – and even today – the gold standard for arthroplasty was to fix joints with cement. In this instance, bone ingrowth is achieved by diffusion bonding of plasma spray coatings. Such methods result in low friction and porosity and limited osteointegration.

“With cemented arthroplasty, the fixation of the implant to the bone is strongest at time zero, the day of implementation,” Pressacco explains. “Over the years, the quality of fixation decreases. With cementless arthroplasty using lattice-based metals, the weakest fixation is at time zero; then bone ingrowth strengthens over time.”

LimaCorporate wasn’t the only company that saw the value of lattice-based metals. One competitor went so far as to buy a company that developed a tantalum-based porous metal. This technology still requires the tantalum to be deposited onto polymeric material, then combined with solid material using bonding techniques such as diffusion bonding.

That’s where LimaCorporate saw its opportunity. “We envisioned combining porous and solid titanium in a single step through 3D printing with no need for coating,” says Pressacco. To accomplish this, the company invented Trabecular Titanium™ (TT) in 2007, a proprietary 3D structure that can be repeated in a design and combined with the solid parts of a prosthesis using AM powder bed fusion. 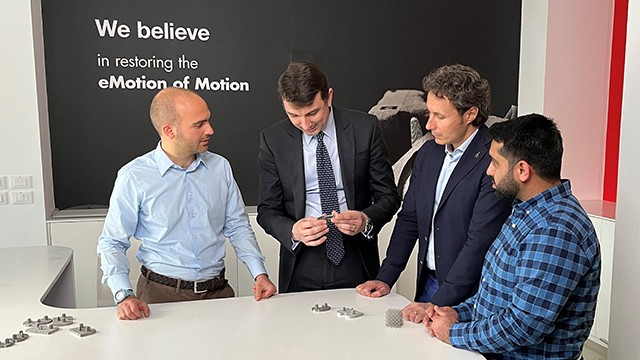 Disrupting the industry with a 3D printed hip cup

The first part LimaCorporate 3D printed in TT was an acetabular hip cup. The challenges of bringing this part to market went beyond the merits of its proprietary biomaterial. “At the time, there were no international standards for 3D printed parts,” Pressacco recalls. “It was a challenge to convince authorities to accept our internal specifications for validation, testing and quality assurance.”

Ultimately, the regulatory bodies gave their approval – and that prompted a bigger challenge. As soon as LimaCorporate got certification, demand was so high the company was immediately on back order. “The state of metal AM was so unproven back then our scrap rate was very high,” says Pressacco. “Still, we had to keep ordering AM machines to fulfill orders, and it took time to validate every machine. Our sales growth was unbelievable.”

Since the introduction of the TT acetabular cup in 2007, LimaCorporate has produced over 100,000 cups with excellent clinical outcomes. A 2015 study found the average Harris Hip Score of patients improved from 44.2 to 95.9 on a 100-point scale at least five years after surgery. More recently, the cup has been awarded with an Orthopedic DATA Evaluation Panel (ODEP) 10A rating, the highest rating for survivorship at 10 years follow-up.

The success of the acetabular cup convinced LimaCorporate it could 3D print other implants with TT. But the experience also served as a lesson: With competitors racing to capitalize on cementless joint replacements, the company needed to improve the speed and efficiency of its AM workflow. 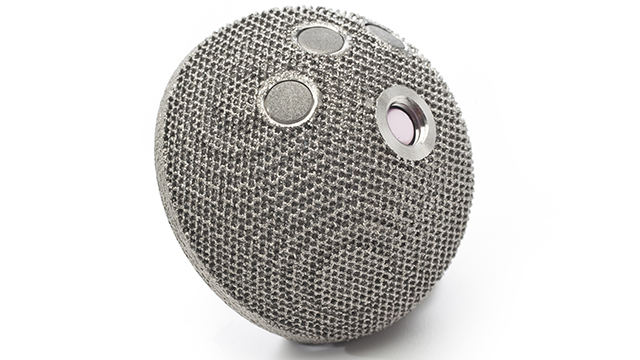 When LimaCorporate decided to pursue cementless total knee arthroplasty (TKA), it knew the challenge would be more difficult than what it faced with the acetabular cup. Hip replacement surgery is a more straightforward procedure than knee replacement. The hip is a ball-and-socket joint, while the knee is a complex joint allowing for a wider range of motion.

To gain a better understanding of how the motion of walking transmitted forces to the tibial plate, LimaCorporate partnered with the Department of Biomechanics of the New York-based Hospital for Special Surgery (HSS), the world’s top-ranked hospital for orthopedics 12 years in a row. The department is led by Timothy Wright and four orthopedic surgeons were involved in the project: Thomas Sculco, Peter Sculco, Ivan De Martino and Fabio Catani at the University of Modena. The team studied patients walking with a knee implant to determine the best location and shape for three contact points between the tibial plate and bone. 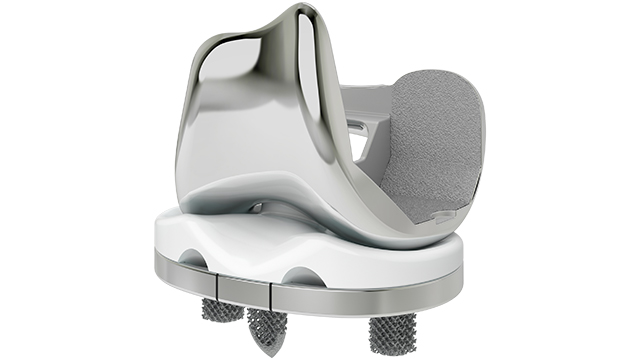 The study also evaluated the bone density of implant patients in the U.S. and Italy. With these two studies, HSS conducted computer stress analyses on contact-point configurations to arrive at a design including two porous TT pegs, a porous anterior spike with a solid tip and a porous surface underneath the plate. “There were a lot of variables,” says Peter Sculco. “Peg quantity, placement, shape, depth; how much we drilled into the bone. The design team kept cycling on changes.”

This high degree of iteration exposed areas where LimaCorporate’s AM process needed improvement. “We didn’t do as much exploration with the hip cup, so we didn’t experience the difficulties of trying to iterate rapidly,” Pressacco explains. “To 3D print every change, we had to create an STL file and bring it into a different software package. Then, if there was another change, it was very difficult to edit the faceted STL files.”

Working with a digital representation of the TT lattice structure further complicated design. Riccardo Toninato, the AM manager at Lima, worked on the study with LimaCorporate R&D and HSS. “Trying to edit the lattice structure from an STL file expended a lot of computational resources,” he says. “We needed a faster, easier way to generate and modify the lattice with high design volume.”

Lima’s challenges weren’t restricted to time delays. For instance, they were manipulating STL files in an isolated tool that created what Toninato calls “a digital discontinuity” with LimaCorporate’s product lifecycle management (PLM) environment. As longtime NX and Teamcenter® software users for all development except additive manufacturing, LimaCorporate R&D was accustomed to an integrated, associative digital thread. But as the AM design process became increasingly iterative, the team began experiencing issues with version control, build handling and scheduling optimization for prototype production.

LimaCorporate needed a new way to design its tibial plate. That’s when they learned that Siemens was offering its NX AM solution. NX and Teamcenter are part of the Xcelerator portfolio, the comprehensive and integrated portfolio of software and services from Siemens Digital Industries Software. 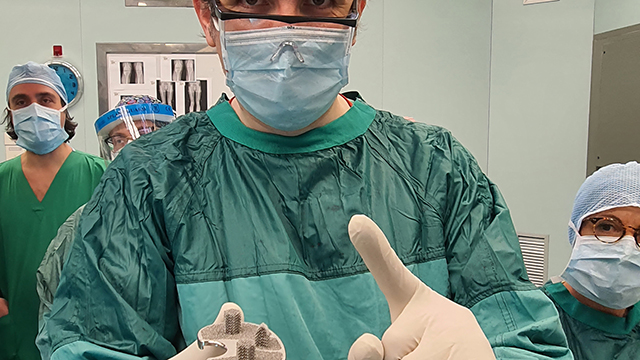 LimaCorporate evaluated NX AM in 2018. Hassan Naeem, senior additive manufacturing engineer, found the software needed enhancements to support LimaCorporate’s workflow. In March 2019, the findings were presented to Siemens. Shortly thereafter, LimaCorporate became a beta tester and began collaborating with Siemens R&D. “The speed with which Siemens turned our feedback into a viable solution was incredible,” Hassan says. “Within months, we had a solution that reduced our dependency on STL files, made it easier to design with lattice and integrated seamlessly within our Teamcenter environment.”

Using NX AM brought immediate benefits to development of the tibial plate. Pressacco’s team took advantage of NX design optimization to further enhance the design. Having determined the ideal placement of the pegs and anterior spike, the team still needed to know how thick the plate should be to withstand the stresses identified by the walking studies. The software automatically computed the optimal TT volume to guarantee the required strength and stability.

Making design changes like this became much easier once LimaCorporate brought NX AM into the development workflow. Designers no longer needed to struggle with manipulating STL files. “We can edit most features of the tibial plate parametrically, because they’re mathematically linked to the geometry,” explains Toninato. “And those changes are associative throughout our PLM environment.”

Using NX AM also simplified the task of designing with LimaCorporate’s lattice structure. “Siemens R&D provided a new feature that allowed us to custom design a unit cell considering all the peculiarities of our proprietary lattice structure,” says Toninato. “With this, we decreased the computational time of designing the Trabecular Titanium structures in our device. And because it was almost fully parametric, design modifications were automatically updated.”

“In our old process, modifying STL files was disconnected from our workflow so it increased the risk of human error,” Hassan says. “Now, with everything in a single digital stream and one-click lattice design, our processes are much more efficient.”

This increased efficiency is particularly valuable because LimaCorporate isn’t just developing one tibial plate, it’s producing 10 off-the-shelf sizes. “Our product is a mass-production device, ” Toninato says. “We have a range of sizes optimized for global markets, from smaller to larger patients and people with different needs. Each size requires adjustments to the features of the tibial plate.” 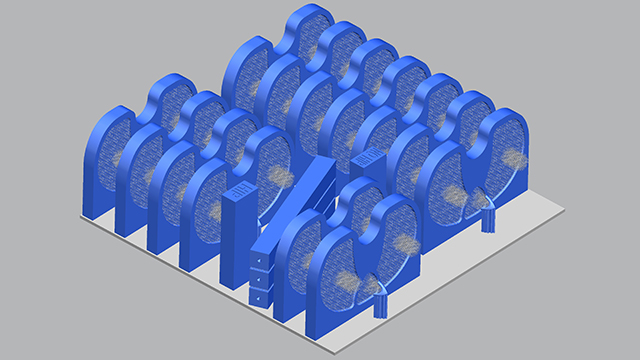 De Martino, who was involved in the HSS study, conducted the first surgery with LimaCorporate’s new knee prosthesis in April 2021 at Rome’s Gemelli Hospital. Since then, a group of surgeons have implanted over 150 cementless implants. Although it’s too early to make definitive judgments, feedback has been positive. According to Peter Sculco, who performed the first U.S. surgery, initial x-rays are encouraging. “The bone is behaving well around the pegs on the tibial plate, bone fixation looks promising and I haven’t had any patients complain of pain.”

“Clinical evidence has to be built over time,” Pressacco acknowledges. “But the performance of 3D printed Trabecular Titanium for our hip implant is well documented. We have 15 years of clinical heritage proving this technology’s success. Because of this and the research study we conducted, we’re confident we’ll have good clinical outcomes with cementless TKA.”

The company has also increased its confidence in the new AM workflow. “We’ve gained several benefits from working with Siemens to improve our processes,” Toninato reports. “We’ve reduced AM modeling and job preparation time by 50 percent. With design optimization, we’re zeroing in on candidate designs with fewer experiments. And having everything in the Siemens software ecosystem has reduced errors and boosted reliability.” 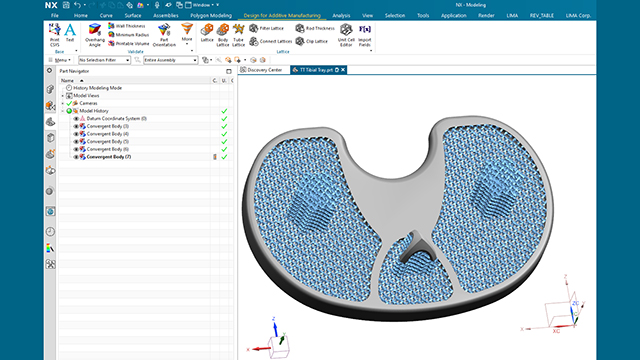 New AM implants and AM-ready hospitals

LimaCorporate isn’t slowing down its efforts to push the AM envelope. Hassan is working with Siemens to embed its build preparation workflow in NX and improve the predictability of successful print builds. Toninato foresees transferring LimaCorporate’s knowledge in AM design to other types of implants. Pressacco points to an even more ambitious project: “We’ve installed an additive production facility at HSS in New York,” he says. “We have LimaCorporate production engineers there, and they’ll be using Siemens software to help surgeons develop patient-specific implants.”

As rewarding as it is to be working on the forefront of AM technology, all three men believe the biggest reward they get from their jobs is serving a higher purpose. “We have a saying at LimaCorporate, that we ‘restore the emotion of motion,’” Toninato says. “Everything we do is aimed at giving people a better quality of life.”

Hassan agrees: “When you consider that our patients are in constant pain and sometimes can’t even stand up, it’s enormously gratifying to help them. That’s what inspires me to work in this business and with additive technology.”