Over the last two centuries, mankind has dramatically evolved. And certainly, modern times have brought many benefits, including longer lives, comfort, communication means, traveling tools and much more. But at the same time, continuous population growth, industrialization and globalization have put enormous stress on the environment. Unfortunately, it was only in the last decades of the previous century that scientists started to share persuasive evidence that we are slowly but certainly causing irreparable damage to our planet.

The current generation is the first in human history to consider how to balance technological advancement with low environmental impact. As a result, engineers are challenged to develop technologies that can satisfy operational and consumer requirements while also meeting the demands for low energy consumption and emissions. To fulfill those demands, many industries, particularly transportation, will require a drastic modernization, both technologically and in terms of process.

It’s not a coincidence that the Korean word for modernity is “hyundai.” The engineers of Hyundai Motor Group (HGC), the third-largest vehicle manufacturer in the world, have experimented since the late 1980s with alternative, more environmentally-friendly propulsion methods than traditional internal combustion engines (ICEs), including flexible-fuel vehicles, electric vehicles and hybrid-electric vehicles (HEVs). The latter are currently the most interesting, awaiting the availability of batteries that can allow a larger range and additional infrastructure to charge electric motors. 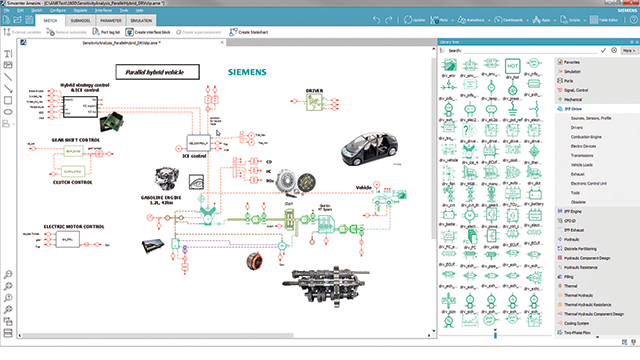 Designing HEVs presents complex challenges, such as determining which configuration will perform the best for a particular vehicle and its intended use. The main idea is to let the electrical motor support the ICE so that it can work more efficiently, or even be replaced for some drive cycles, like city use, for example. Significant engineering effort goes into the sizing of components and in defining the control algorithms that coordinates collaboration of the electric motor and ICE for optimal efficiency. At the same time, engineers must consider other critical performance requirements, including driving dynamics and comfort.

“As the effect of changing a parameter in favor of one performance aspect can negatively influence another, we have to look at multiple attributes simultaneously to find the optimal balance,” says Bang Jae-Sung, senior engineer at Hyundai. Jae-Sung is one of the specialists at Hyundai’s R&D center who focuses on developing the HEV control logic for optimal vehicle performance. “On top of that, with so many parameters involved and so many different drive cycles to evaluate, it would become a very time-consuming and costly affair if too much of the process still relied on trial and error.” 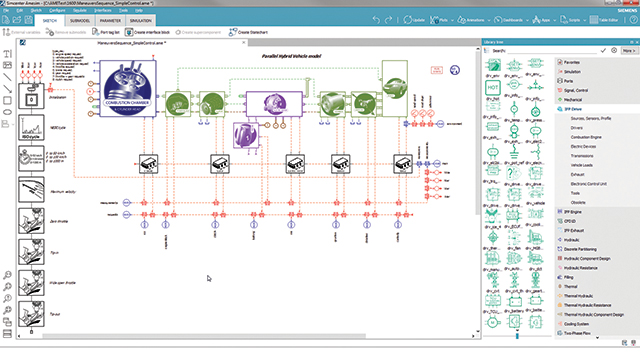 Together with Siemens Digital Industries Software specialists, Hyundai engineers researched the possibility of saving development time and cost by implementing a more automated performance optimization process, using state-of-the-art simulation capabilities. Together, they executed a project in which they virtually tested, validated and calibrated an HEV main controller using a real-time, closed-loop, model-based system simulation. Though hardwarein-the-loop (HiL) test platforms are industry-standard, this test case was rather unique in that it accurately captured both fuel economy and drivability simultaneously.

“HiL simulation can be a difficult balancing task,” says Jae-Sung. “On one hand, you have to limit the number of degrees of freedom (DOFs) so that the calculation can run in real time, but on the other hand the simulation model needs to remain sufficiently accurate so that it still produces realistic results. This requires very specialized software tools. By using Simcenter Amesim™ software from Siemens Digital Industries Software for the plant model in co-simulation with the MATLAB, Simulink and Stateflow environments for the controller models, we could achieve this objective really well.”

Besides the supervisory hybrid control unit (HCU), which was the main subject of the validation study, the engineers also had to model the subsystem controllers to an appropriate level of detail. The engine management system (EMS) for example, regulates fuel, air and spark in order to produce the torque that is commanded from the HCU. If this feature is not modeled accurately, it can lead to significant deviations when predicting fuel economy and the battery’s state of charge. Other subsystems add to the complexity.

The dynamic Simcenter Amesim model included the required physics to accurately capture the energy flows and conversions from fuel to mechanical and electrical energy. For drivability assessment, the model possessed all the relevant elements for replicating the natural frequencies between 0 and 20 Hertz (Hz), as these can be felt by the driver. The model also included the efficiencies and energy losses of the main components necessary to predict fuel economy. The model was systematically built from component to full vehicle, validated in each of these stages, and later simplified to run in real time.

“The project we did with the Simcenter Engineering specialists showed us that we can realize a good correlation between results from HiL simulation and the real vehicle behavior for multiple attributes simultaneously,” says Jae-Sung. “It confirmed that we can use this approach for upfront performance validation, as it allows us to quickly evaluate trends when designing HCU algorithms and defining calibration values, so that we can achieve a better starting point for physical prototyping.”

The implementation of the Simcenter Amesim-based process as a standard development practice allows Hyundai engineers to improve the performance of HEVs while dramatically reducing time and cost. “By pre-defining major calibration values using HiL simulation, we were able to reduce the number of actual vehicle tests by 40 percent,” confirms Jae-Sung.

“And we are in the process of extending the scope of this methodology to a much larger number of test scenarios, by including additional physics in the models, such as thermal effects on engine, electric motor and battery, road geometry, vehicle lateral dynamics and many more.” 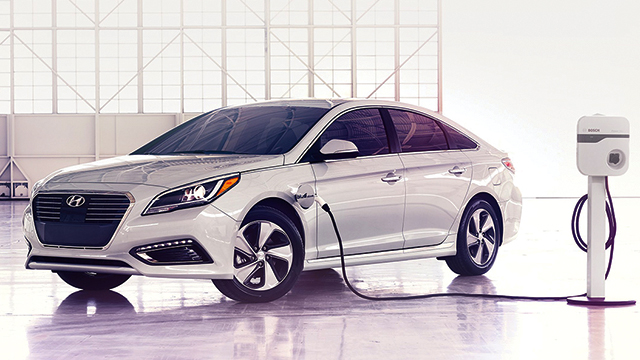 This thorough digitalization of the process for eco-friendly vehicle design aligns with Hyundai’s long-term vision. In its mission statement, Hyundai clearly expresses the ambition of fulfilling its role and responsibility as a trusted global firm, while at the same time continuously improving the customer experience. To achieve this dual goal, the company counts on effectively delivering innovative mobility solutions based on technologies that are both ecofriendly and human-oriented. Adding value to their vehicles by applying this digital transformation to product development is a logical part of this endeavor.

The next step is just around the corner. Rising innovations such as cloud computing, big data analytics and the Internet of Things offer new technological perspectives. They will also enable companies like Hyundai to stay closely connected to their customers and, for example, get more information on the actual use of their vehicles, even on an individual basis.

“Making a vehicle smart by digitally connecting development and operation will be the next technological revolution,” confirms Jae-Sung. “For our application, we could imagine that additional improvement of performance and energy efficiency can be achieved by developing a control logic that can reflect the driver’s tendencies, and gather on-the-spot information on the actual traffic density. In that sense, digitalizing vehicle development is just one step in a broader process.”

It is a vision that matches current industry trends, and one that Siemens Digital Industries Software endorses. To realize this vision, Siemens is gathering all the building blocks for an environment that facilitates a digital thread throughout the entire product lifecycle. Through ambitious development plans and acquisitions, Siemens clearly aspires to support their customers when they create the next modernity – in Korean: the next Hyundai.