The key benefit the Siemens software products give us is the speed of response to make a competitive change, to fix problems and to create more performance at the race track in a very tight window of time. Jim Wall, Director of Engine Programs Hendrick Motorsports
WYZWANIA KLUCZE DO SUKCESU WYNIKI

The key benefit the Siemens software products give us is the speed of response to make a competitive change, to fix problems and to create more performance at the race track in a very tight window of time. Jim Wall, Director of Engine Programs Hendrick Motorsports

Hendrick Motorsports leverages the Simcenter™ portfolio to optimize part and system performance for internally devel- oped cars, including engines. The company’s efforts include everything from evaluating new components and systems, optimizing designs before release, performing forensic failure analysis and decoding the mechanics of a failure that has occurred to understand- ing generally-accepted performance rules. This includes everything from individual parts to the behavior of the entire car.

Hendrick Motorsports’ four Cup Series teams are supported by a staff of more than 600 and a wide array of technologically sophisti- cated tools from Siemens Digital Industries Software, such as the Simcenter portfolio and computer-aided engineering (CAE) software, which includes Simcenter 3D and Simcenter™ Nastran® software

“What we do is like having a new product introduction every week for 36 weeks,” says Jim Wall, director of engine programs at Hendrick Motorsports. “You have to re-invent yourself every week, understanding the advantage is getting your ideas to the race track before someone else does. “In the last decade, we have been moving forward with a more optimal design from the concept stage. We are using finite element analysis as an upfront tool for the design so we don’t have to break the part before we improve it. We want to engineer components that allow our teams to showcase their talents to the best of their abilities.”

To do that effectively and leverage more information than other teams, Hendrick Motorsports has taken to heart the concept of the Digital Enterprise, establish- ing an environment that provides a digital twin of the major car areas they work on, the chassis and the engine. The engineers in those areas use digital twins to enhance their development efforts and put winning cars on the track.

The engine engineering team, the vehicle dynamics engineering team and many other groups use NX in their computer- aided design (CAD), computer-aided manufacturing (CAM) and CAE (integrated capabilities from Simcenter 3D) operations. They drive this information to their Teamcenter® software unified environment, which is used to coordinate and track versions and revisions, and has a number of workflows to automate review and release processes throughout the organization.

A great example of the new idea work thread is the pump cast optimization project the team completed. The goal was to optimize part designs before manufacturing was finalized. The team wanted to perform analysis that would optimize designs to make sure the final parts would operate within design limits for stress (avoid material/part failure) and deflection (avoid clearance issues with surrounding parts and assemblies in all operating conditions). Using Simcenter 3D tools before metal is cut decreases the overall design cycle time, improves the reliability of the final parts and eliminates the traditional rework cycle.

Another great example comes from the vehicle dynamics group. This group has modeled an entire chassis in NX. While seemingly simple – a chassis is basically tube steel welded together – Hendrick Motorsports uses Simcenter 3D to evaluate the design and predict its performance. The team first checks for compliance with NASCAR standards and safety requirements. Then it takes the fairly simple steel tube welded design and looks at it as a system model for analysis – connection points, welded joints, etc. – that are required to be modeled accurately to allow the bigger system to provide accurate results.

Studies are conducted on this model for many operating conditions to make sure resulting behaviors remain in the linear static range under race conditions (nonlinear behavior would likely be cata- strophic causing things to break or deform permanently) and the chassis is behaving within that linear static range to provide the best driving/handling characteristics. 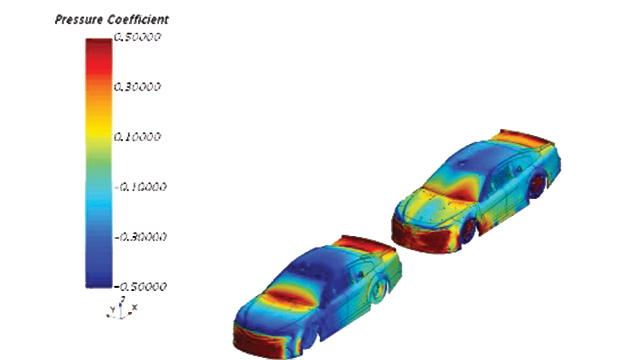 The other major engineering projects focus on forensic analysis of failures. Since most teams will race again the following week, it is important to understand what happened as the problem may well crop up somewhere else in the fleet in the next race.

“Mr. Hendrick understands that we push the limits and take chances with our designs,” says Wall. “He understands that failures are part of learning and of racing. But you better understand the failure and not make the same mistake twice.”

This became the starting point for ideas to resolve the problem. New ideas were put into new versions of the parts in the assembly, which were then run through additional assembly FEM solves, applying the previous condition to these new geom- etries. When an acceptable solution was found, it was released to the manufactur- ing shop. It was also updated in the bill-of-materials (BOM) and Teamcenter was used to make sure that the new designs were implemented in the vehicles across the fleet.

“Our product release cycle can be as short as three days,” explains Wall. “If we have a failure on Sunday, we’ve got to come up with a fix, produce parts and retrofit the fleet, usually before Wednesday night when the trucks get loaded with the race cars for next weekend’s event.

Our biggest thing here at Hendrick Motorsports is managing change. Our business changes so rapidly.” 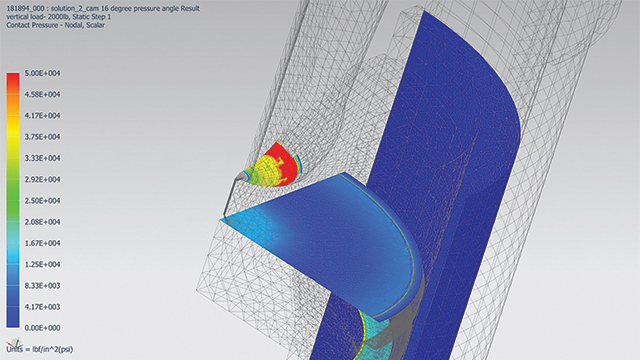 For example, the engine engineering team decided to look closely at what really happens to a valve spring in operation, getting to a deeper understanding of what is happening in the springs from manufacturing through race use than they had ever done before. Everyone in the garage knows that valve springs need to be shot peened as part of the manufacturing process. However, the why of that rule of thumb is not always fully understood.

“Spring design is typically driven by basic equations that characterize forces and stresses internally to the part, but do not provide insight into the location of these stresses,” explains Bryan Fleck, engineering analyst at Hendrick Motorsports.

Using Simcenter 3D, Hendrick Motorsports was able to examine the variation of stress throughout the spring coil. “The use of Simcenter 3D simulation tools was valuable in providing insight into the deformations and locations of stresses in a valve spring,” says Fleck.

Additionally, the increased understanding of why the shot peening was important to understanding spring performance and where the spring would be most vulnerable to failure helped direct the engine assemblers. They were able to look for damage in specific areas on a spring that could predict/lead to failure, such as nicks or gouges on specific coils and surfaces of a spring. This insight allows an assembler to swap out questionable parts for others that are not displaying warning conditions. This insight also helped as they looked at post-race damage or failures involving springs, which allowed them to understand the causes of spring failure in a way that was previously not possible, thus facilitating a quicker evaluation and remedy of a situation.

Similarly, computational fluid dynamics (CFD) analysis tools helped the vehicle dynamics group better understand the concept of aero push and the effects of drafting on a car. The team certainly uses wind tunnel testing and CFD to study car aerodynamics. The goal was to help balance drag (lower drag means more speed in the straightaways) and down- force (more downforce means more grip and more speed in the corners, but slows the cars on straightaways) for their cars. The teams are constantly looking at airflow over, under and through their car designs.

They are also using CFD to look at drafting effects so they can understand how a following car gets affected (looking at both drag and downforce) based on when and how the following car approaches another car. Everyone in the garage knows these effects are real, but really digging out the why will help the team gain a competitive advantage in their designs. It may also help in discussions between engineers, crew chiefs and drivers about how to work the draft differently to gain a competitive advantage. 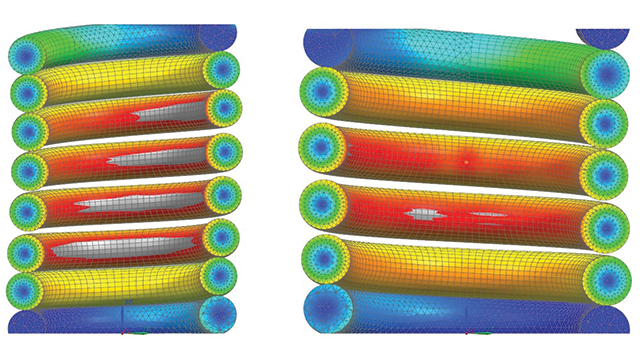 Sadly, all of that work has a shelf life of maybe two weeks. One side of the NASCAR racing environment that may not be generally recognized is that all of this engineering has to be done out in the open. The NASCAR open garage policy means that cars and teams set up shop next to each other for the weekend. There are no walls or curtains; nothing separating them. And the garages are assigned by current points standings, meaning you are sure to be next to the cars you are fighting with week-in and week-out as you try to climb the standings and win a championship.

The goal every week is to find something else no one else did, prove it digitally and get it on the car for the race next week- end. Hendrick Motorsports has won 10 championships while partnered with Siemens Digital Industries Software and its Simcenter applications, and it continues to leverage every tool in the toolbox to stay ahead of the competition.

“The key benefit the Siemens software products give us is the speed of response to make a competitive change, to fix problems and to create more performance at the race track in a very tight window of time,” says Wall. 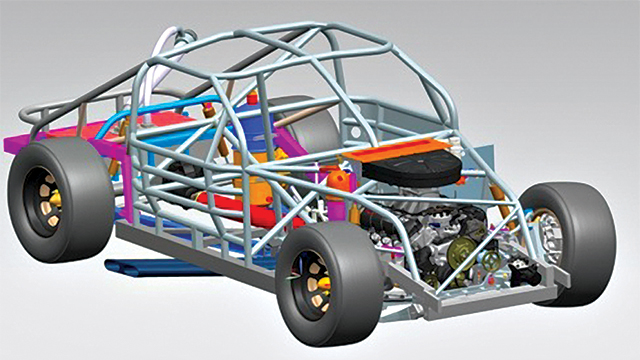