Other systems are CAM-only or CAD-only, so you have to learn two tools to use them as a CAD/CAM system. NX is an integrated CAD/CAM solution, so it only requires half the training time. Shinichi Ohara, Manufacturing Engineering Department Heiwa Sangyo
WYZWANIA KLUCZE DO SUKCESU WYNIKI

Other systems are CAM-only or CAD-only, so you have to learn two tools to use them as a CAD/CAM system. NX is an integrated CAD/CAM solution, so it only requires half the training time. Shinichi Ohara, Manufacturing Engineering Department Heiwa Sangyo

Operating from Funabashi and Ichikawa in Chiba Prefecture as well as Komagane in Nagano Prefecture, Heiwa Sangyo uses two other systems besides NX – one solely for computer-aided design (CAD), and the other for CAM only. The use of NX as an integrated CAD/CAM system is increasing.

NX (formerly Unigraphics® software) was first implemented at Heiwa Sangyo in the late 1990s. At that time, the company was using a very expensive numerical control (NC) programming system that did not yield a favorable cost/performance ratio. Heiwa Sangyo had many heavy industry customers and considered expanding its business by moving into manufacturing tooling for low-power molding. The company chose NX for its lower cost and because it was widely used in the lowpower molding industry.

At the time of its introduction, NX was used for mold manufacturing, but it also helped Heiwa Sangyo acquire new business. “NX is the primary CAD/CAM solution in the aircraft engine field,” explains Yasuhiro Yao, president of Heiwa Sangyo. “Previously, the design work was done in 2D but, starting in 2000, engine companies changed to 3D, and NX was the tool they used. For that reason, using NX led to new orders for our company.” 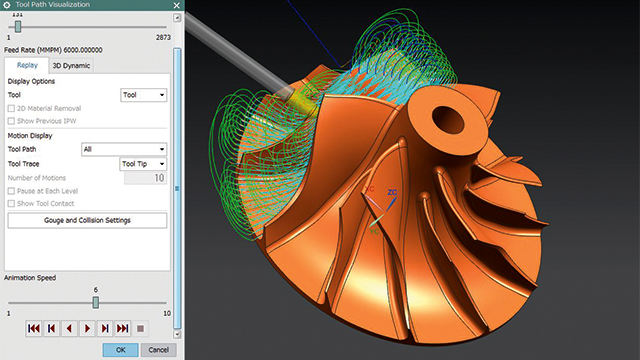 Heiwa Sangyo manufactures parts based on design data supplied by its customers. Customers typically supply only the model of the finished part with some machining instructions and other documents. Heiwa Sangyo engineers must create additional data for the manufacturing process, including designing workholding jigs and fixtures. “The modeling process to create the data for manufacturing is quite complex,” explains Shinichi Ohara, Manufacturing Engineering Department, Heiwa Sangyo. “With its linked CAD and CAM, NX is extremely effective at solving this challenge.”

Heiwa Sangyo uses NX throughout all processes, from the time the data is received from the customer until the machine tools are set in motion. For many projects, Heiwa Sangyo must create blueprints from the designs, using the drafting capabilities of NX. When machining involves many steps and multiple types of machine tools,engineers use NX to create work instructions and process plans. “NX is a complete CAD/CAM solution that we use when we need to go from blueprint creation and design to production on the shop floor,” says Ohara.

In many cases, the design data supplied by customers is not in native NX format. In such cases, the company imports the data into NX using common intermediate formats such as the Standard for the Exchange of Product Model Data (STEP) or the Parasolid® software format.

The synchronous technology modeling capabilities of NX are especially useful in working with imported data. “We lose the original parameters when importing the supplied data and end up with a model that we can’t revise with conventional modeling,” says Ohara. “In that case, using synchronous technology allows us to change the size of holes or move surfaces on models that have no history, so we use it a lot.”

Heiwa Sangyo also uses the modeling functions of NX for troubleshooting when there are problems in converting data from other systems. Translation problems require extra time to clean up and repair data, and can impact the production schedule. Data conversion problems become even more serious when the 3D data is provided without blueprints, because the company must work only with the shape data. “Depending on the system used to create the part model, problems such as missing surfaces may occur when we import data,” Ohara explains. “NX is able to read such data with no trouble and can easily edit the data, even if there is a problem. NX is very useful for repairing data when conversion problems occur.”

Because Heiwa Sangyo is in the business of manufacturing actual products, the company must be able to create NC code for a broad variety of machine tool and controller configurations. More than 15 types of postprocessors are needed for the operation of the company’s machine tools. The creation of these posts can be very difficult work, and Heiwa Sangyo engineers use the integrated NX CAM Post Builder capability to improve this process.

Before NX CAM, Heiwa Sangyo relied on other companies to create postprocessors. “With the CAM system we used previously, we outsourced development of the postprocessor required for each machine tool,” says Ohara. “We had to buy the posts for each machine tool, but we were unable to add or change anything in those posts. We were delighted that NX CAM had the capability to quickly customize postprocessors. It provides users with dedicated functions in an easy-to-operate user interface that responds to the requests of CAM users.”

Yao summarizes the merits of postprocessing with NX: “The postprocessor used to be a black box, but with the NX Post Builder we can now create and adjust it by ourselves.” 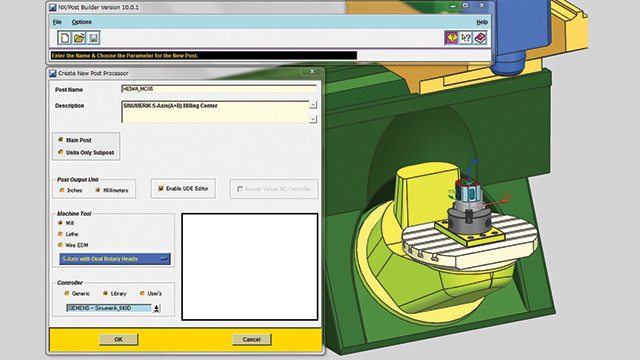 Cutting training time in half

In an industry where the use of CAD/CAM is increasing, NX helps reduce the cost and time required for personnel training. “Other systems are CAM-only or CAD-only, so you have to learn two tools to use them as a CAD/CAM system. NX is an integrated CAD/CAM solution, so it only requires half the training time,” says Ohara. Functions that enable the intuitive creation and editing of models, such as synchronous technology, are effective even when used by engineers with few CAD skills.

Confidence in system development and support

Before NX, Heiwa Sangyo used another CAM system as its primary solution. The other system was considered to be easier to use for simultaneous multi-axis machining, which is the company’s core expertise. However, changes in the ongoing development of that system focused more on design functions rather than CAM, and the system lost its prior advantages.

“The direction of development ‒ moving away from or closer to the production floor ‒ is evident in the characteristics of each system,” says Yao. “On that point, I think that NX is a tool that has been developed consistently for a long time.”

Heiwa Sangyo also values support as a key reason for the use of NX as its primary system. “NX provides tool and holder libraries that are valuable even for tasks that we perform on other systems,” says Shinichi Ohara, who manages the actual NX operation at Heiwa Sangyo. “In addition to the main CAM functions, NX also supports peripheral technologies, such as the templates and design libraries used in CAD. I think that full-fledged support is the main reason that we have been able to use NX in our own way. We are able to talk more directly with the developer, and for a company of our size, the direct communication is personal and reassuring.”

Looking to the future of manufacturing

Heiwa Sangyo sees many advantages provided by NX, such as the software’s support for advanced capabilities of the latest machine tools. The company is also attuned to the potential of NX under Siemens, which also manufactures industry-leading machine tool controllers and has a reputation for facilitating highperformance complex machining. “Siemens is an established leader in the CNC controller field for simultaneous multi-axis machine tools,” says Yao. “NX is part of the same Siemens brand. From the user point of view, that technology integration sets the stage for solving next-generation problems.”

Heiwa Sangyo is independently expanding the use of NX by linking it with quality control systems. Quality is important for companies engaged in manufacturing and delivering real products that satisfy high customer standards. Currently, the company uses NX to create the production NC data from customers and send it to machine tools. Heiwa Sangyo is building a system to support high-quality manufacturing throughout the process, which will be a significant competitive advantage. “We want to be able to take a manufacturing result and raise the quality to the next level by accumulating those results and analyzing them,” says Yao. 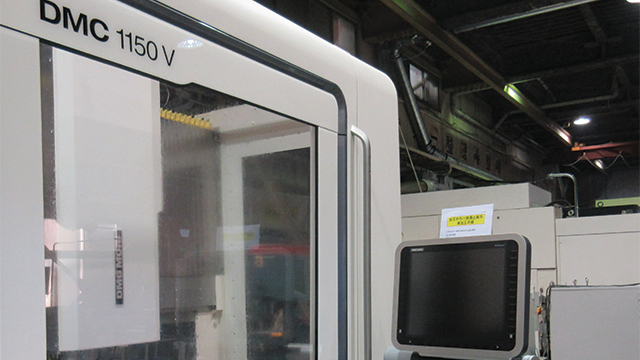