Darmstadt University of Applied Sciences is one of the largest universities of applied sciences in Germany with approximately 16,500 students, 320 professors, and over 70 degree programs. The university’s range of programs and research capacities extends from engineering sciences, mathematics, information science and computer science to management, social sciences, and social work, as well as architecture, media and design.

Smart factories for what is termed Industry 4.0 are fully networked facilities for automatic, mass-customized production. The manufacturing industry needs specialists with the ability to master the complex technology behind this. Companies require graduates from schools and universities who are not only open-minded but also familiar with the technological environment they will encounter in their later professional careers.

A good place to look for engineers fulfilling these requirements is Darmstadt, Germany. The city is the birthplace of numerous products and technologies that have changed our daily lives such as the clock radio, acrylic glass, the first enzyme-based washing agent, and the liquid crystals used in displays. The city is home to a technical university as well as the Darmstadt University of Applied Sciences (h_da), which has an excellent reputation for its practical approach to higher education. Its programs range from engineering sciences, mathematics, information science and computer science to management, social sciences and social work, as well as architecture, media and design. One of the international master courses in Electrical Engineering is taught solely in English.

“Our Department of Electrical Engineering and Information Technology is running an assembly plant authentically reproducing the automation processes in a real factory,” says Dr.-Ing. Stephan Simons, professor of automation and control technology at h_da. “This small smart factory is an Industry 4.0 demonstrator and a research and tutorial platform where interdisciplinary teams of students learn how to design, commission, operate and maintain future production facilities utilizing the Internet of Things.” These students are enrolled in various faculties, including electrical and mechanical engineering as well as industrial engineering and management, opto-technologies and image processing.

Although confined to a space of only 50 m2 (538 ft2), the fully automated assembly line for electromagnetic relays is equipped with everything a production plant needs. It features a high-bay storage rack with 44 storage places both for components and finished product and material transport using intelligent shuttles traveling on a 20-meter (65’ 7”) rail system. A 6-axis industrial robot performs the actual assembly before the relays pass automated optical and electrical tests as well as weighing for final inspection.

The various functional parts of the plant are individually controlled by programmable logic controllers (PLCs) as well as motion controllers and a dedicated robot controller. Using the OPC UA protocol, they communicate with the university’s enterprise resource planning (ERP) and manufacturing execution (MES) systems that are running off-site in private and public clouds. 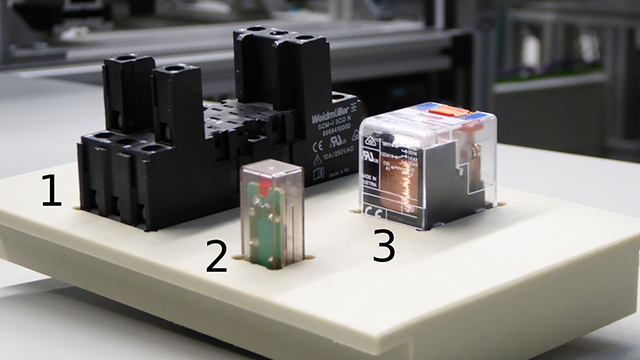 The smart factory assembles several varieties of electromagnetic relays in one-off quantities as demanded to fulfill orders in a cloud-based ERP system. Both components and finished products are transported through the line using intelligent shuttles equipped with RFID chips. Photo: M. Wittmer

Using a digital twin from the start

When Simons started making plans for the smart factory, he learned about the Tecnomatix® portfolio from Siemens Digital Industries Software. Tecnomatix is a comprehensive portfolio of digital manufacturing solutions that help digitalize manufacturing. Using Tecnomatix robotics and automation programming solutions, engineers can design, simulate and program operations utilizing robotics and automation offline. Integrated simulation capabilities allow connection of either a virtual PLC or an actual PLC from a real environment to test and optimize control, automation, material transport and the entire operation.

The professor started his smart factory project with the Tecnomatix Process Simulate solution because he intended to use that software’s capability to connect with real PLCs for virtual commissioning. He later extended the use of the Tecnomatix portfolio in the smart factory to the Plant Simulation solution, as this also covers simulating material flows and energy consumption in 3D.

“I knew that in the future, simulation and virtual commissioning of the production line will be vital for the industry to remain competitive,” says Simons. “Using Tecnomatix to build the digital twin of the assembly line and performing virtual commissioning, we had the plant operational in just two years, although each student stays on the job for only one semester.” 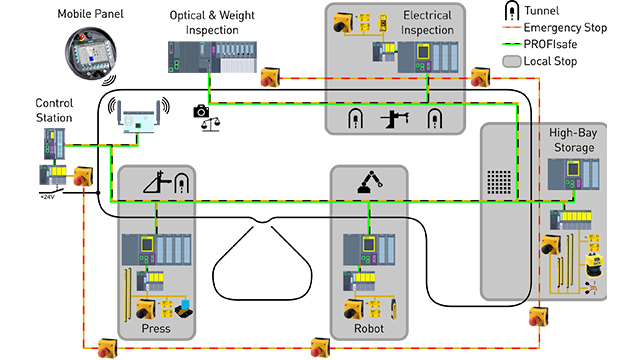 The main purpose of the smart assembly line is teaching students how to make problem-oriented use of the latest technologies. They need to learn how to create comprehensive systems, familiarizing themselves with knowledge outside their own specialization focus. Information technology (IT) and industrial automation are no longer separate disciplines, they are deeply linked. As any one piece of software cannot handle all aspects of product creation, they need to apply and combine various specialized systems.

“Our most formidable task is to supply the industry with people who are ready to start practical projects forming the future,” says Simons. “The industry is still full of walls separating the departments, and it needs people with the expertise and the motivation to tear those walls down.”

What distinguishes h_da from technical universities is a more practical approach. To guarantee compatibility with the real-world requirements of the industry, the smart assembly line uses solely industrial technology that is available on the market. “We chose Siemens systems for both automation and digitalization,” says Simons. “More than any other supplier, they successfully bring automation and IT together.”

Combining the virtual and the real world

For computer-aided design (CAD), students at the h_da use NX™ software. They export the models they create to Tecnomatix and to other software systems using the universal JT™ data format. Since 2016, they have been using the Mechatronics Concept Designer™ software within NX. It enables them to pursue a multidisciplinary system engineering approach to machine design, starting with a functional model for mechanical, electrical and automation aspects of the designs. Mechatronics Concept Designer has easy-to-use physicsbased interactive simulation capabilities that can be used to validate that a product works before building it. Its open interfaces to other tools can be used for virtual commissioning at a different scale from what is possible using Tecnomatix.

While Tecnomatix allows simulation of complex systems including conveyors and robots, the Mechatronics Concept Designer is best used for systems engineering and simulation of the physical behavior of critical kinematics. In order to gain experience with that software, it was initially used to design and simulate a smaller conveyor system.

“Tecnomatix and Mechatronics Concept Designer also allow us to teach students to select the right software for a task,” says Simons. “A group of students trying to simulate the shuttles in the relay assembly line failed because the manufacturer provided only simplified 3D models that inadequately reflect the shuttles’ physical properties.” 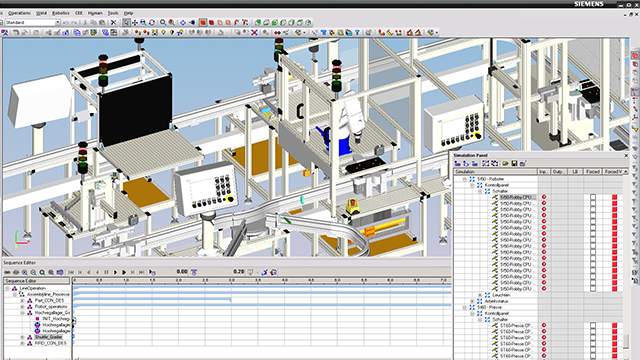 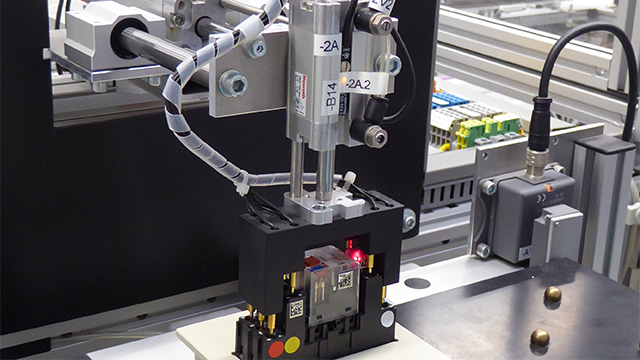 Learning how to handle constant change

During the sixth semester, students with different specializations form teams of two to six to jointly tackle automation topics. By mid-2018, 290 students have made projects at and around the Darmstadt smart assembly line. It is permanently undergoing redesigns, which makes it as close to real industrial life as you can get.

Failed relays are transported to a manual rework station where workers correcting the fault are supported by a 3D animation and step-by-step instructions displayed in augmented reality glasses. Students equipped the glasses with an OPC UA client to interface with the surrounding system to correct the fault.

Even before the product was launched, h_da started using MindSphere industrial IoT as a service solution from Siemens. In addition to analyzing energy data, it will also be used for machine learning applications to detect anomalies in the running plant.

Recently, h_da started using Teamcenter® software for product lifecycle management. They will use that software for internal workflows and approval processes. Its use will be extended in conjunction with the Automation Designer software for electrical and automation engineering, also from Siemens Digital Industries Software. The university will deploy this software within NX that is based on an open, graphic integration platform next to get an even more complete multidisciplinary development environment.

Every time someone – almost invariably the professor – returns from the Siemens booth at a major industrial trade show with ideas for new business cases, this raises the question of integrating new technologies with the existing plant. Simons concludes: “The ability to find good answers to this kind of question is exactly what the industry seeks in electrical engineers.” 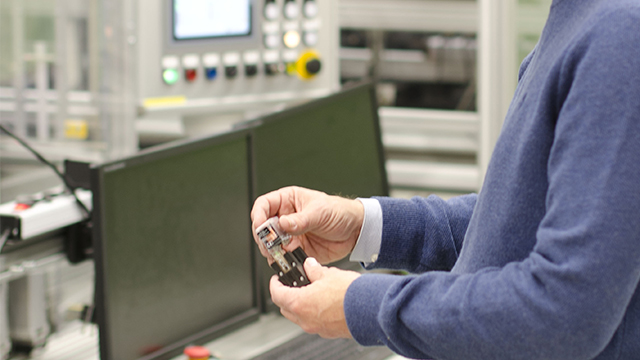