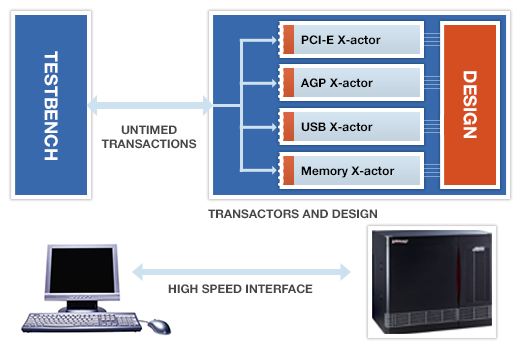 “To simplify the verification of complex Imagination IP, we’ve chosen an integrated verification strategy where emulation is an essential technology,” said Martin Ashton, EVP, PowerVR, Imagination Technologies. “The Veloce TBX technology delivers a total solution with inherent flexibility, which was essential for us to achieve first-pass silicon success on the PowerVR Wizard GR6500 design.”

Another key benefit for Imagination was Mentor’s uniquely developed capability to support Imagination’s 64-bit drivers with the Veloce emulation platform. There was no need to change to custom target hardware for 64-bit operation, which meant that schedules were not adversely affected while waiting for new hardware. This capability also made for more efficient platform integration, allowing for a mix of any CPU architecture and associated operating system and for streamlined software driver code development with the ability to execute real content.

“We are pleased by the progress Imagination and Mentor have made over the last years in the use of the Veloce emulation platform to make verification more effective and flexible,” said Eric Selosse, vice president and general manager of the Mentor Emulation Division. “Imagination has worked to refine a verification flow that not only benefits them internally but also benefits their ecosystem partners who chose to design with Imagination IP.”

About the Veloce Emulation platform

The Veloce emulation platform is a core technology in the Mentor® Enterprise Verification Platform™ (EVP) – a platform that boosts productivity in ASIC and SoC functional verification by combining advanced verification technologies in a comprehensive platform.

The Veloce emulation platform’s success is a result of several factors: high design capacity, speed of execution, and exceptional functionality. Now considered among the most versatile and powerful of verification tools, emulation is used by project teams for hardware debugging, hardware/software co-verification or integration, system-level prototyping, low-power verification and power estimation and performance characterization.