I picked my way into Solid Edge and found more and more functionality. It was a watershed moment when I realized I could simply sketch, then extrude to create a 3D shape. Philip Norman, CTO Ross Robotics Limited
과제 성공 비결 결과

Ross Robotics produces rugged, high-performance robots that are adapted to the task and to the operating conditions. Using an open architecture, the company standardizes robot technology and the Robosynthesis Modular Platform creates a wide range of special-capability robots from a set of generic parts. The company harnesses manufacturing economies of scale to reduce cost without sacrificing engineering excellence.

I picked my way into Solid Edge and found more and more functionality. It was a watershed moment when I realized I could simply sketch, then extrude to create a 3D shape. Philip Norman, CTO Ross Robotics Limited

Inspired by the natural world

As determined as a salmon swimming upstream, as robust as an armadillo, it can climb and creep like a gecko. It has the aptitude of a chimpanzee to utilize tools and the capacity of a cockroach to withstand extreme and hazardous environments. Simple, yet sophisticated, it is a reconfigurable robot from Ross Robotics, and it can be deployed to undertake numerous tasks across a wide range of industries.

What differentiates the Ross Robotics approach is the design and production of modules that fit together and can be configured in a variety of ways. Scalable and uniquely customizable, the Robosynthesis® Modular Platform can be delivered “off the shelf.” Philip Norman, co-founder and chief technical officer (CTO) of the company, explains, “Our robots might look quite different but they use exactly the same parts, which gives the potential to assemble and reassemble on-demand for different purposes.”

Every part is independent of everything else, yet can be locked to one or more other parts and still be moved into a new position. Unlike building-block systems that only allow pieces to connect to each other in two or three directions, the Robosynthesis Modular Platform has no such constraints. The principle of axial and orthogonal repositioning is enshrined in the original geometries of this modular system. Components can be fitted together at any angle, and the composite angles thus created are infinitely adjustable.

From concept to clarity with Solid Edge

The Robosynthesis Modular Platform was conceived at the start of the 21st century when Norman was living in France and exploring the concept of a new construction toy. He mentioned this to an engineer friend who introduced him to Solid Edge® software from product lifecycle management (PLM) specialist Siemens Digital Industries Software. “It was a revelation,” says Norman. “What had begun as a rather dreamy intellectual idea became sharp and clear. I picked my way into Solid Edge and found more and more functionality. It was a watershed moment when I realized I could simply sketch, then extrude to create a 3D shape. I went on to discover that I could put bits together and create an assembly or place parts in a library and take them out later. There was a sense of pure delight when I updated a part I’d built and it updated in the assembly as well. To top all of this, I could break up an assembly and go back to where I was. There are clearly lots of little ‘Eureka!’ moments as a user becomes quicker and more confident.”

As his ideas evolved, Norman went on to consider, then discard, an architectural application. Education was the main theme for several years as he funded further development by providing school and technical college students with an opportunity to study mechatronics and prototyping through programs at IFMA, the advanced mechanical engineering institute in Clermont-Ferrand. A suggestion from a family member then led Norman to modular robotics. “I realized that I needed to drive this to a tangible outcome, and I became really focused,” he says. “The main challenge was to create and build one part that could join components together and rotate.” 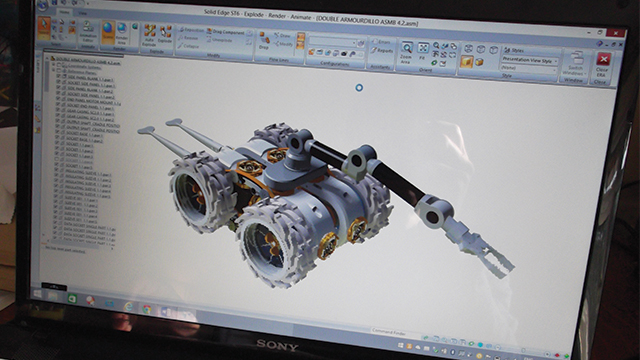 Norman arrived at the answer in the form of a universal connector that fixes in any direction. This is critical to the Robosynthesis Modular Platform, and he subsequently patented the design. Having solved the problem of physical connectivity, he set out to create a means of data connectivity. A special jack plug designed to absorb vibration and withstand force carries electrical channels through its core and provides communication, data transfer and power charging capabilities.

Norman made another leap forward with the design of a wheel system inspired by the webbed feet of ducks. Named CLAWWS, this system enables a robot to maneuver up steps and over unstructured surfaces such as bramble bushes. “Finding the precise geometry for this certainly took a long time, but with Solid Edge I never got stuck,” comments Norman. “I could explore one version, save it, try out another and go back. What was really helpful was the ability to keep my options open. Decision-making can sometimes bring creativity to a close and I wanted to continue in a state of uncertainty until I was absolutely sure. I found that I could chop and change very quickly before I actually decided.”

“As Solid Edge has provided new functionalities in synchronous modeling, some processes are almost immeasurably speedier,” Norman adds. “Where I would have budgeted a whole day for certain tasks, they can now be completed by mid-morning, a 75 percent reduction in time.”

Pursuing the animal theme, Norman designed the robots to have a low center of gravity for stability and a tail that acts as a damper and prevents flipping. Parts are deliberately springy and flexible so that the robots are both agile and resilient. Components are manufactured by tooling a computer numerical control (CNC) machined master, then vacuum casting in a variety of plastics. “We use plastics because rigid things break easily and production costs are lower,” says Norman. “However, we coat these plastics in a fine layer of metal instead of using separate metal components. This metalization process, which we applied to the universal connector, enables us to make parts that are strong, cheap and light. Material science has been a whole new learning curve for me. I’ve picked up a lot of knowledge about different aspects such as how to design parts for strength and flexibility.” 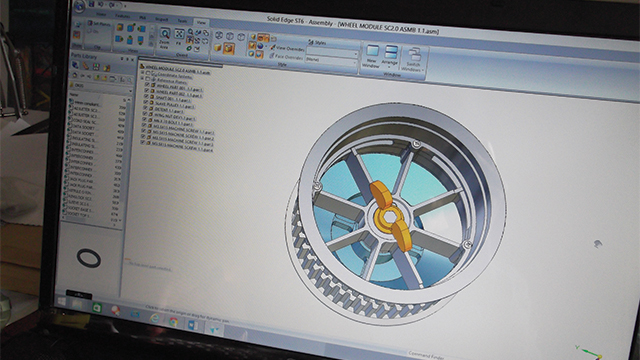 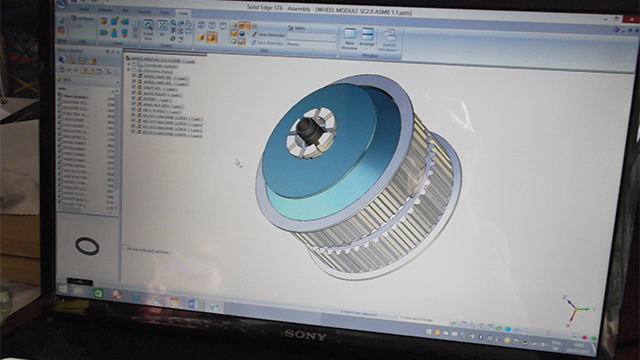 One of Norman’s particular interests lies in the legibility and navigability of our world and its contents. He was therefore keen to ensure that the Robosynthesis Modular Platform would be easy for an untrained end user to understand and negotiate. In addition, there is no need for any bolting at the industrial assembly stage – everything presses together with a pleasing and reassuring “click.” Norman notes that the ability to produce high-quality rendered images of the components has been particularly useful for marketing purposes. “The more recent releases of Solid Edge have helped us considerably.”

For Norman there has been a sequence of development milestones. “The creative process does work in mysterious ways,” he says. “Just as observation can distort a particle within subatomic physics, the act of scrutinizing may not yield definitive answers. The big challenge is always to see where a concept might be going, and that is not necessarily easy.” His determination has, however, led to a range of patents and the Robosynthesis Modular Platform is attracting intense interest. Potential applications include demining, agricultural activities and the maintenance of critical infrastructure. “Despite my enthusiasm for elegant design, our robots are really only components, and Solid Edge is key for us because it is great for designing components,” concludes Norman. 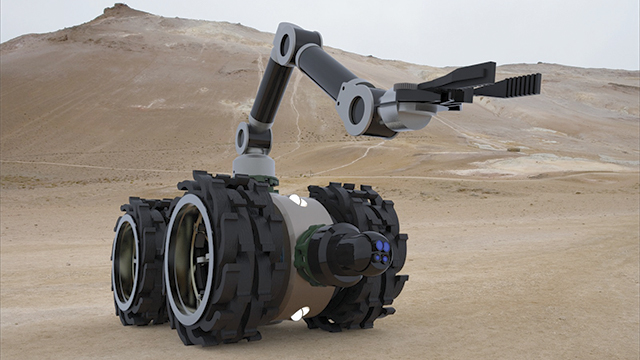