Harsh routinely adopts and succeeds with new technologies. The company was started in the late 1940s, applying new underwater welding techniques learned by its founder, Bud Harsh, during World War II. Harsh applied the welding techniques he learned as he saved the lives of American sailors trapped in sinking war ships in the Pacific Ocean.

As the post-war economy and population grew, so did farms all over the world, including in Harsh’s rural Colorado. Demand for new, innovative agricultural machinery grew with the times, and Harsh invented and became the world’s largest supplier of truck hoists, a staple in agricultural applications.

In the past several decades, smaller familyowned farms diminished as large corporate operations became the norm. So did the size of the tools and the need for large, customized cattle feeders, mixers and spreaders. This required the state-of-theart 3D engineering software, robotics, computer numerical control (CNC) machining centers, lasers and water jets. As a result, automation, production and profits jumped. 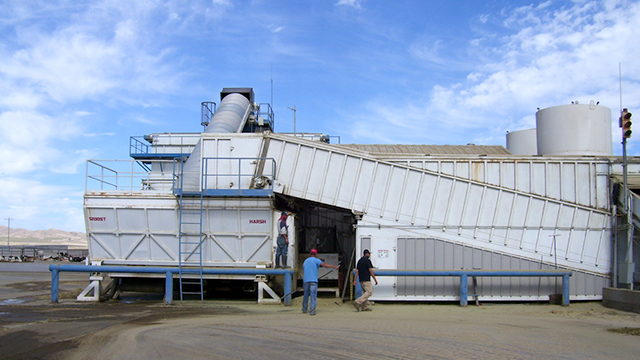 New demands from customers and the dealers who sell Harsh equipment require innovative technologies. “Small feedlots are being purchased by the bigger companies,” says Kenny McDaniel, engineering consultant at Harsh. Equipment requirements are getting bigger, requiring Harsh to adapt designs.

According to McDaniel, Harsh’s ability to quickly change its designs differentiates it from the competition.

“They’re taking their existing design and, if it fits into what the customer needs, that’s fine,” says McDaniel. “But if it’s anything outside of that, they’re not going to be able to do it, whereas we can use the synchronous technology in Solid Edge.”

Harsh maintains a lot of old 2D AutoCAD® software data as well as 3D data created in history-based 3D modeling. The company can leverage that work by bringing it into the synchronous technology environment and quickly manipulating it. McDaniel said that without synchronous technology, those projects would have to be re-designed from scratch.

In addition, McDaniel documented a couple of other projects in which synchronous technology provided major time savings.

”We received a custom design order that would take two or three weeks in the old history-based modeling process,” says McDaniel. “But with the synchronous technology of Solid Edge, we did it in three days. Another, much larger, project involving a 100-ton spreader that would have taken us 12 to 18 months using historybased 3D CAD, took us just six months with synchronous technology. 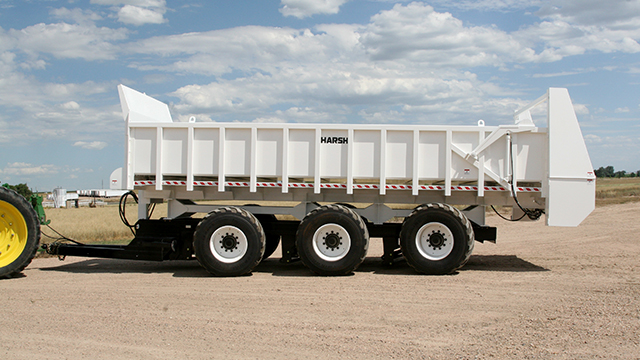 Harsh used Solid Edge to design a patented product to address the effects caused by the global growth in the size of cattle operations, such as the environmental impact of large feedlots.

Using its experience in the cattle business, one of Harsh’s largest feedlot customers in Brazil introduced Harsh to a scientist in Canada who has a patent focused on large-scale gasification of waste products from operations such as cattle feedlots. The Canadian scientist had extensive experience with the mad cow disease outbreak in the 1990s in the United Kingdom, which required the disposal of 4.4 million infected cattle, a major technical challenge because of the high temperatures (1,100 degrees Fahrenheit) at which the disease remains viable.

Although it did not take part in the slaughter, Harsh became a partner in the development of a massive machine to burn manure and other biological waste products at extremely high temperatures. “The payoff is both environmental and financial,” says Robert Brown, president of Harsh.

The gasification process in the cattle waste machine creates steam, heat and electricity, a co-generation system.

“We can put electricity back into the local power grid and also accomplish other benefits,” says Brown. “We get rid of something that is bad (livestock waste), reduce the amount of energy needed at feedlots and the exhaust that comes off of it is very clean.”

Harsh machines that are the size of a football field (and designed using Solid Edge) have been running in prototype mode at locations in Colorado and South Carolina.

The Harsh machine needs natural gas to get the waste material up to about 700 degrees, but then the fuel source is cut off and the material goes into an autothermic status within the machine. It then provides its own heat, which climbs as high as 2,200 degrees. Harsh’s experience in the design and manufacture of feeding machines, spreaders and mixers with augers, motors and other parts sped development of the new technology.

“We spent three years learning how to feed the waste material through the machine,” says James Brown, the vice president and director of engineering and Robert’s brother. “We learned about air flows and other factors and how to monitor the chamber with special instruments. The idea is to transform feedlots which are now very large and more concentrated, sometimes with 120,000 head of cattle.”

The benefits are many, say the Brown brothers, and include:

Harsh plans to utilize Solid Edge to move from the prototype to a new chapter in its history of innovation. “It’s got to be 100 percent reliable, durable and we need to have everything in place for downstream support,” says Robert Brown. “It must be affordable, sustainable and practical. With the help of Solid Edge, we’re getting there.”