The simplicity of Solid Edge enables a very intuitive operation, something that had been lacking in the systems I’d used to date, and it was just what I had been looking for. Professor Makoto Yamada, Head of Production Systems Engineering Hakodate National College of Technology
課題 成功の鍵 成果

Hakodate National College of Technology provides higher education for nurturing engineers to ensure they will have advanced skills in working with the technical innovations of the future.

The simplicity of Solid Edge enables a very intuitive operation, something that had been lacking in the systems I’d used to date, and it was just what I had been looking for. Professor Makoto Yamada, Head of Production Systems Engineering Hakodate National College of Technology

Hakodate National College of Technology (HNCT) was established in 1962. In Japan, a college of technology – KOSEN (kotosenmon-gakko) – represents a special, five-year program focused on industrial and engineering education. HNCT represents one very successful KOSEN, turning out outstanding engineers for more than 50 years. Armed with HNCT’s educational principles of basic technical skills, creativity, communication skills, internationalism and a strong sense of ethics, many of the college’s alumni are active in the manufacturing industry in Hokkaido and throughout Japan.

From their freshman year until they graduate five years later with degrees in engineering, students work hard in a varied curriculum that includes practical training to cultivate the skills that will enable environmentally responsible manufacturing. In particular, the design and drawing courses, which utilize Solid Edge® software from Siemens PLM software for computer-aided design (CAD), represent an essential part of the program. Solid Edge, which is used each academic year until graduation, is currently deployed in course work taken by more than 500 students from the mechanical, electrical and chemical engineering departments. 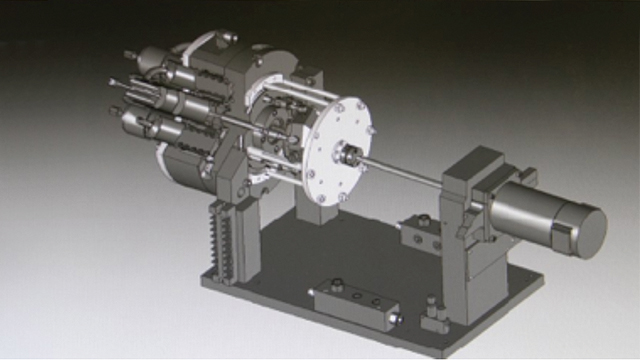 “My first encounter with Solid Edge was in 2002,” says Professor Makoto Yamada, head of Production Systems Engineering at HNCT. Yamada had heard of Solid Edge, so he purchased a book about the software with a compact disc (CD) attached at a bookshop in Sapporo and soon tried it out. Yamada explains, “The simplicity of Solid Edge enables a very intuitive operation, something that had been lacking in the systems I’d used to date, and it was just what I had been looking for.”

When he returned to the college, the use of Solid Edge spread naturally among the other lecturers and students. Even students who had to change from different CAD software at the beginning of the new academic year accepted Solid Edge without resistance. According to Yamada, this was further proof of just how easy Solid Edge is to use.

Ten years later, Solid Edge is now running on more than 200 personal computers (PCs), in four CAD rooms as well as the department library. “All of our Solid Edge licenses are being fully used,” says Yamada. “There are numerous teachers and students using it in the laboratories. Altogether, there are about 300 machines using Solid Edge. It’s remarkable to think it all started from an encounter in a bookshop.” 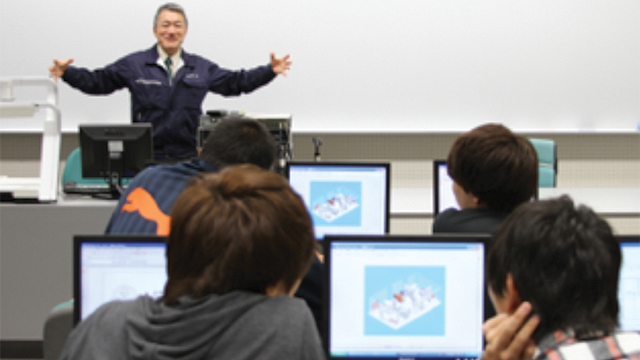 When training engineers, it is very important to allow them to have hands-on practice – to actually make objects. Professor Yamada notes that this enables the students to experience how the knowledge they have learned in the classroom works in practice and to develop their intuition as engineers.

Great importance is placed on hands-on training at HNCT. “The original reason we wanted to introduce 3D CAD into the curriculum was to enable the students to experience the whole process of manufacturing, from design to machining,” says Yamada. “Using Solid Edge to produce 3D models from 2D information, such as sketches, makes it easier for the students to grasp the actual shape of the design. Also, shapes are rendered using laminating molding and machining, thus allowing the design to be understood in the physical world.” Yamada adds, “We are also using 3D data to provide experience in casting. With Solid Edge, students can experience the process from modeling to pouring molten aluminum into the molds, and take the finished product home as a souvenir. Every student has a chance to develop these valuable experiences.”

KOSEN is not only focused on producing highly skilled people, it also functions as a research and development (R&D) institution, collaborating with universities and industry in order to contribute to local communities through R&D grounded in actual practice. Yamada explains that the implementation of Solid Edge also improved results in this sphere: “When Solid Edge was first introduced, the research topic was related to decreasing product development time,” says Yamada. “The subject for examination was the development of water supply valves produced by a local company. At that time, manufacturers had to cut wooden molds, obtain cutting data from drawings and then move to the machining phase. As you can imagine, such a process did not allow a fast response to design changes.”

Professor Yamada came up with the idea of replacing the wooden molds with stereolithography, instructing his students in the use of Solid Edge to create the 3D data. “Today, it’s natural to create your molds in 3D, but in those days we didn’t have an environment to do that,” he says. “The students of those educators who were implementing such cutting-edge technology must have certainly gained heightened awareness and appreciation of the technology advantages.

“Solid Edge has also been utilized in laboratories engaged in the development of Stirling engines. In a Stirling engine, the efficiency greatly depends on how the fluid flows within the engine. Therefore, a great deal of thought has to go into the parts that control the flow. By making fine adjustments to parts with honeycomb-like holes and spiral formations, we are working to find the optimal parts shapes. The use of Solid Edge enables modeling to very fine tolerances, which allows us to conduct verification on many more types of patterns than was possible with other methods.”

Every year HNCT takes part in the KOSEN Robocon competition, which allows students from technical colleges to advance their ideas, competing against each other in the design of robots and automatons. Elite teams chosen from regional tournaments compete in the national tournament. Yamada notes that in this competition, he has observed HNCT’s students using Solid Edge with the greatest of ease in the development of new ideas. Yamada elaborates, “With Solid Edge, students check their designs, animating movements so that interferences can be readily detected. The students quickly see how their ideas play out, which typically leads them to fine-tune their concepts and develop more new ideas.”

“HNCT plans to expand its use of Solid Edge, incorporating finite element analysis (FEA) into our courses,” says Yamada. “Starting next year, we plan to use Solid Edge Simulation in our lessons. The aim is to nurture high-potential engineers, who will study CAE (computer-aided engineering) from an early stage and apply it to what they have learned in other courses. Using Solid Edge Simulation, the students will be able to digitally validate part and assembly designs, which means they will gain invaluable experience in confirming academic theories through real-world application.”