With the help of Simcenter Flomaster we were able to reduce the cost, time and resources needed to physically test all these aspects. Marios Mouzouras, Engineering Student Team Bath Racing
SFIDE I SEGRETI DEL SUCCESSO RISULTATI

Team Bath Racing is the UK’s most successful Formula Student team. Run entirely by students from the University of Bath, the team designs and builds a single-seat race car to compete in Formula Student competitions around the world.

With the help of Simcenter Flomaster we were able to reduce the cost, time and resources needed to physically test all these aspects. Marios Mouzouras, Engineering Student Team Bath Racing

The Mechanical Engineering course at the University of Bath teaches students how to use physical science, mathematics and computing to assess engineering systems. Students combine this with study in design and manufacturing processes to understand how modern industry works. At Bath, practical project work is central to the education experience. Group and individual projects enable students to put theory into practice and gain experience in engineering enterprise management.

One such group project is Team Bath Racing, which participates in the Formula Student international motorsports competition, Europe’s most established educational engineering competition that celebrated its 20th anniversary in 2018. Backed by industry and high-profile engineers, the competition aims to develop enterprising and innovative young engineers and encourage more young people to pursue careers in engineering.

Team Bath Racing is the most successful Formula Student team in the UK. Each year, undergraduate engineering students design and build a single-seat, open-wheeled race car to enter in Formula Student competitions around the world.

“We started working on the project as third-year students,” explains Marios Mouzouras, a member of Team Bath Racing for the 2016 season. “We worked as a team to design a race car from scratch as part of a design and business project that contributes to our degrees. We then take these designs to compete in the Class 2 design event at Silverstone racetrack in the UK, where lessons learned are used to develop the design further. As we enter our final year of engineering study, manufacture of the car begins and we watch our designs become a reality.”

In the final year of the project, the team designed the thermal management system for the car. After some research into available tools, the team decided to use Simcenter™ Flomaster™ software as part of the design process. Simcenter Flomaster is a leading system-level thermo-fluid simulation tool that virtually simulates and optimizes fluid flow to improve system performance. 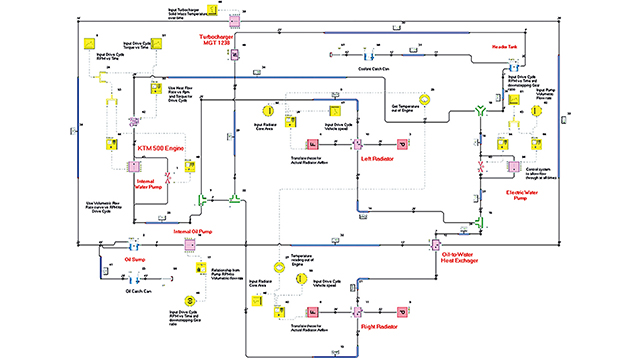 Team Bath Racing’s ultimate goal was to use Simcenter Flomaster to create a representative transient thermal model of the vehicle’s cooling and lubrication system. The model would include the engine, turbocharger, radiators, pumps, piping, header tanks, oil cooler and fans. To begin the process of the design, the team set maximum temperature boundary conditions and then conducted several experiments to obtain the necessary inputs for the transient model.

The team performed tests using an in-house dynamometer to quantify the heat transfers occurring at each engine revolutions per minute (RPM) and torque, then conducted an outdoor air flow test to determine the relationship between the air flow through the radiators and the vehicle’s speed with fans on or off. Finally, the team did a coast-down test to determine the vehicle rolling and drag resistance coefficients to develop an engine torque model to match the engine heat transfer against torque during vehicle operation. Results of these tests were used in the creation of the thermal model. 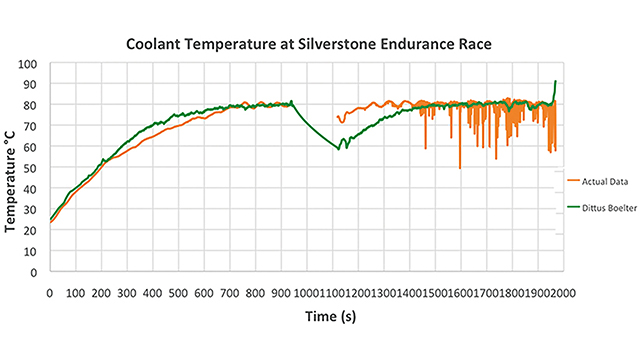 With the collected test results, the next step was to create a radiator model in Simcenter™ Flomaster™ using both the fin and tube geometry of the radiator and the performance data provided by the manufacturer. “The learning curve was easy, and a model was easily produced compared to the pre-existing methods.” says Mouzouras. “Comparing simulation results and test data showed a good response with a change in coolant flow rate but had an increasing discrepancy with an increase in air flow velocity.”

This discrepancy was mostly likely caused by error with the longitudinal and transverse pitch of the tubes stating that the values are very small. The team tested values for different pitches and identified a relationship that as the values decreased, the heat rejections increased. The team experimented with additional simulations, switching from cross-flow heat exchangers to other heat exchanger models in Simcenter Flomaster, obtaining the best results using the thermal heat exchanger model that had a 1.13 percent error compared to actual data.

The trends when increasing coolant flow rate or air flow rates were both as expected. There were small differences at the 6 to 10 meters per second (m/s) air flow velocities, because the fixed time step for the air mass flow gave a maximum of 0.005 kilograms per second (kg/s) difference between modeled and actual.

It was also important to test the pressure losses. There was an anomalous change in pressure drop observed from the experimental data. In the experimental case of 2 m/s of air flow, the pressure drops from 54.91 kilopascal (kPa) to 52.33kPa with an increase in coolant flow rate, and then starts increasing with high air flow rates. This was not captured by the model which instead predicted a constant increase as flow rates increased, which followed the rest of the data sets as expected.

With the radiator model completed, Team Bath Racing modeled the rest of the components using a combination of experimental data obtained through testing and logged data from the previous year’s endurance event at Silverstone. This included crucial information such as engine RPM, vehicle speed and time.

In addition, the team completed a number of tests to optimize the system, including testing various radiator core sizes at different ambient temperatures; running with a single radiator instead of two; having an unexpected broken radiator during the endurance race; checking different size oil coolers and their positions in the cooling system; fan sizing; electric water pump sizing; pipe diameter selection; and some control strategies.

The use of Simcenter Flomaster in developing the race car for Formula Student competition demonstrated the value of hands-on, real-world project collaboration as well as the potential of leading-edge simulation technology to solve complex engineering challenges. “With the help of Simcenter Flomaster we were able to reduce the cost, time and resources needed to physically test all these aspects,” says Mouzouras. “We also set up a model for future years to benefit as well. This also saved some weight from the car and helped us to better understand how the cooling and lubrication system works.”