Founded in 1919, Marumo Electric Co., Ltd. is a manufacturer that specializes in stage and studio lighting equipment and dimmer devices. It is based in Tokyo, Japan.

Specialized manufacturer of stage lighting Marumo Electric Co., Ltd. (Marumo Electric) develops, manufactures and installs light fixtures and dimming systems as a manufacturer of stage and television studio production lighting equipment. The company has a large market share in Japan and has handled stage lighting for leading theaters and auditoriums, including the Kabukiza Theater and the new National Theater in Tokyo, as well as for hotels, schools and other facilities.

Marumo Electric was founded in 1919 in Tokyo and will celebrate its 100th anniversary in 2019. The company was originally established to manufacture such things as high-voltage switchboards, grid resistors and searchlights, but when the 1923 Great Kanto Earthquake struck, causing tremendous damage throughout the region, it served as the turning point for the company as it became a specialized manufacturer of stage lighting. The Kabukiza Theater, which is dedicated to performing kabuki, one of Japan’s traditional theatre arts, was still being rebuilt after being destroyed by a fire caused by a short circuit in 1921, and the earthquake damaged it again.

Domestically manufactured dimming devices for stage lighting did not yet exist when the Kabukiza Theater was being rebuilt, and similar products were only manufactured overseas by Siemens and General Electric (GE). However, there was strong demand for items made in Japan, and Marumo Electric founder Tomijiro Marumo undertook everything from lighting design to system development. Marumo Electric became a pioneer in manufacturing Japaneseproduced stage lighting, and the company’s product model names became synonymous with commonly used industry items.

What is stage lighting?

Lighting is used to project images such as sunlight filtering through trees, waves, clouds and the moon on stage. Alternatively, shining lights on a stage with limited space evokes a sense of threedimensional spatial depictions, as well as being used to choreograph effects such as the changing time of day. It also affects how the audience sees the performers. Stage lighting equipment is broadly divided into three types.

About a 1,000 of these types of lights are suspended above the stage in a theater. Flat lighting is set up on stage with spotlights on various stands in the stage’s wings, with electricity supplied to these lights by a dimmer. Everything is controlled in one place with a dimmer console.

Why simulations were needed

Irregularities are unacceptable in stage lighting, so light sources such as fluorescent lights or discharge lamps cannot be used. That is why the halogen bulb came to be used as a light source. Compared to ordinary lights such as incandescent bulbs, these halogen bulbs have from 500 to 10,000 watts and produce a large amount of heat. Halogen bulbs are now used in 90 percent of stages and studios

However, the number of light fixtures that use light-emitting diodes (LEDs) has also increased with recent advances known as chip on board (COB) LEDs, and the number of studios that have switched completely to LEDs has been increasing. These COB LEDs, which are mounted in high densities, also have high luminous efficacy, and dissipate heat well. LEDs have luminous efficacy of 120 lumen/watt (Lm/W), around six times the efficiency of the halogen bulbs’ 20 Lm/W, and the light intensity of an approximately 1,000-watt halogen bulb can be obtained with around 160 watts. However, there is a problem with high heat flux because COB lights are mounted with LEDs in high densities and LEDs are characteristically sensitive to heat. The heat generated by LEDs diminishes their performance and shortens their lifespans, and sometimes results in failures.

Additionally, because stage lighting is meant for lighting theaters and studios, light must not seep out in unintended directions. Thus, designs must include housings that have vents and cooling channels that account for that.

Additionally, lights are suspended above the stage, so they need to be light weight. Fins used to be designed larger than needed to provide leeway for heat dissipation purposes. However, doubling the weight cuts the number of lights that can be suspended by half, which means there might not be enough light. 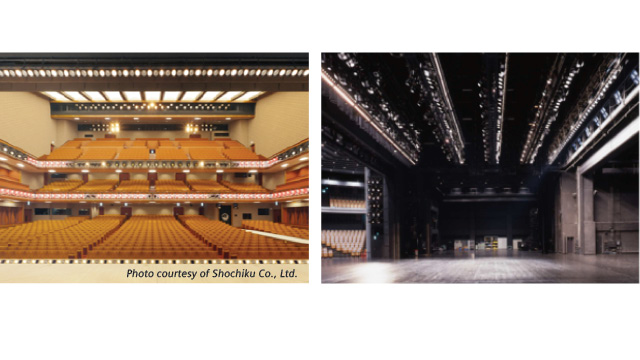 Recent innovations in LEDs has led to the development of many different types of lights to respond to market demand. Three kinds of designs are required to use LEDs as light sources: optical and heat dissipation designs and dimming circuit designs to create attractive lighting. Adopting simulations was essential to accomplishing these simultaneously.

Before introducing Siemens Digital Industries Software’s Simcenter STAR-CCM+™ software, part of the Simcenter™ portfolio, they used software for designing optics and a package that combined the finite element method (FEM) structural analysis for thermal design and electric field and heat transfer analysis. They required fewer designs for attaching fins that were larger than needed for heat dissipation, thanks to this heat transfer analysis tool. However, they were not able to analyze thermal transfers between fluids and solids because there was no fluid analysis function.

Moreover, light must not leak from a light fixture. Thus, housing vents are designed like a labyrinth. The key is to find a balance between shielding and cooling. Fluid flows cannot be analyzed with heat transfer analysis alone, and problems occurred with light designs that had been judged to be problem-free until the internal temperature ended up rising significantly. This served as the impetus for thinking about introducing high-end fluid analysis tools.

Marumo Electric chose Simcenter STAR-CCM+ was because it had a Japanese language compatible graphical user interface (GUI), was user friendly and made it easy to visualize analysis results. 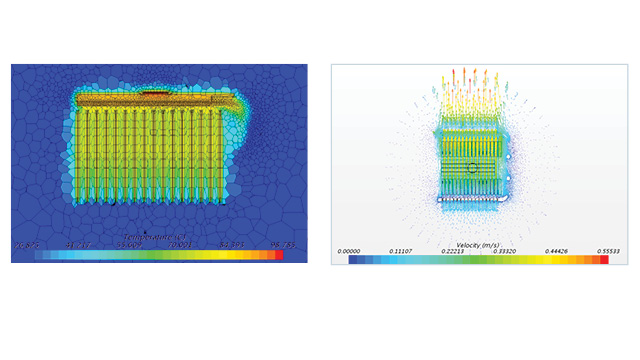 Marumo Electric creates the geometry for analysis models using Parasolid® software for computer-aided design (CAD). The models consist of the heat sink components (figure 6, which shows the heating surface, fins and heat pipe) and light source components (figure 7, which shows the substrates, LED chips and phosphor). Numerous LED chips are arrayed in rows on the device (see figure 7), but the LED chip was simplified to reduce the number of meshes and labor hours devoted to creating meshes for the analysis models.

Additionally, Marumo Electric used the Design Manager add-on-tool (formerly known as Optimate+) to explore the design of the location where the heat sink’s heat pipe would be attached.

Specifying air as the fluid, Marumo Electric used an ideal gas state equation for the density. They used aluminum for the solid properties of the heat sink and substrate, gallium nitride (GaN) for the LED chips, and an yttrium, aluminum and garnet alloy called “YAG,” for the phosphor. The boundary condition was defined as the pressure outlet boundary around the fluid, with full 3D models for the analysis, and a realizable K-ε model was used for the turbulence model, using steady-state analysis.

The results they came up with predicted a solid temperature of 98.8 Celsius (ºC) in the center of the LED component, 74.8 ºC at the edges of the heat sink’s fins’ undersides and 86.5 ºC at the edges of the heating surface. This enabled Marumo Electric to confirm the heat diffusion requirements were being met. The direction of gravity is toward the bottom of the image in figure 9, thus the temperature becomes lower toward the bottom of the fins. Figure 10 shows a cross-section of the fins that shows the temperature distribution. The temperature gradient on each fin is also small, and the result is heterogeneous. Figure 11 shows the flow field in natural convection, and they were able to confirm there were no issues with fin pitch because the flow among the fins was also smooth.

Experiments to verify accuracy were also conducted for this project. Figure 12 shows the test device. At the start of the project there was an issue involving the analytic values for temperatures ending up higher than the measured values. Marumo Electric was able to determine the thermal resistance among solids was due to differences in the thermal resistance values among the solid bodies because of the effects of grease on devices and differences in components’ power and luminousness.

By using calibration, Marumo Electric is now able to obtain precise results that are nearly equivalent to measurement values.

During normal one-year periods for developing lights involving a cycle of designing, testing, redesigning and testing, Marumo Electric would have finished testing two devices. For that reason, they sacrificed weight in their designs, designing large fins. However, deploying Simcenter STAR-CCM+ has significantly changed the ways that products are designed at Marumo Electric, resulting in a 35 percent reduction in development times and in the number of test devices fabricated. Says Ryosuke Wakabayashi, a computational fluid dynamics (CFD) engineer in the Marumo Equipment Development Division, “Implementing CFD means reworking has been eliminated. We repeated producing actual devices and testing them before we adopted Simcenter STAR-CCM+. Simcenter STAR-CCM+ has made efficient development possible.”

Additionally, Marumo Electric is able to accurately predict cooling performance, and this has also been useful in cutting the weight of lights’ heat dissipation devices by 50 percent.

“Up until now during the design phase, we designed large fins so as to leave leeway for heat diffusion,” says Hisashi Asakawa, senior manager of the development department. “Simcenter STAR-CCM+ has enabled cooling performance simulations, making optimum designs possible, and that has also been useful in making lights lighter as a result.”

Marumo Electric is now become able to conduct more complex simulations involving forced convection cooling with fans, and the use of Simcenter STAR-CCM+ is increasingly influencing the product development process. “By installing Simcenter STAR-CCM+, we are able to do things that we had not been able to do,” says Asakawa. “This is the most important thing.”