Dongfeng Automobile Co., Ltd. is one of the key enterprises in China’s auto industry, with core business covering the entire series of commercial vehicles, passenger vehicles, auto engines and parts.

Getting off to a good start

The increasingly fierce competition in the auto market not only poses more demanding requirements for manufacturers to improve productivity and lower processing costs, but it also challenges them to significantly shorten the design development cycle of vehicles and related products. As one of the chassis’ four main systems, the steering system is a vital part of the structure. With the continuous innovation in steering system products, the electric power steering system (EPS) is gaining popularity.

To optimize product quality and sound vehicle performance, it is critical to get the design and development work just right in the early stages. As a leader in the auto industry, Technical Center of Dongfeng Motor Corporation has invested heavily in the design and development of EPS using the modeling simulation platform provided by Simcenter Amesim™ software, part of the Simcenter™ portfolio. Dongfeng Technical Center builds EPS simulation models while effectively optimizing product designs with data analysis and comparing test results, leading to sound product performance and a shorter development cycle. 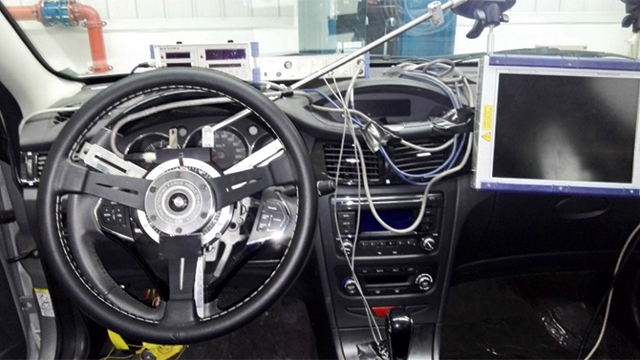 As the automotive emission regulations become ever tighter, the Chinese market holds great potential for developing EPS systems. Unlike traditional HPS systems, EPS can be independent of the engine and reduce fuel consumption by around 2 to 5 percent, increasing demand for EPS products that are poised to supplant HPS as the most popular steering system. In regions with highly developed auto industries, such as Europe, the United States and Japan, the utilization rate of EPS is greater than 50 percent, and even as high as 90 percent in Japan.

EPS not only enables the integration of electronic control technology, micro motors and high-precision sensors, but it also supports improved energy efficiency, environmental performance and safety. As the Chinese government further promotes the use of energy-efficient cars, EPS is becoming a standard feature, and suppliers and original equipment manufacturers (OEMs) are paying more attention to developing the core technologies behind EPS systems. 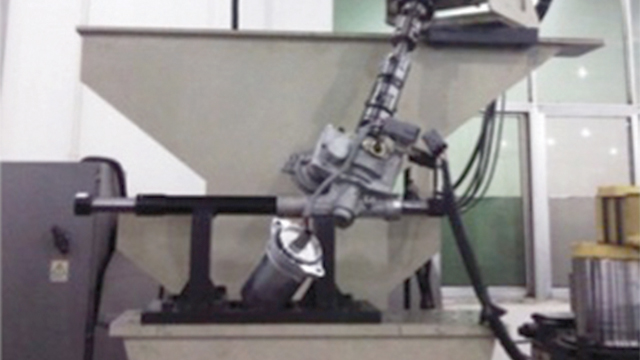 All Technical Center of Dongfeng Motor Corporation passenger cars are equipped with EPS, which are delivered by domestic independent suppliers. This means there are more precise requirements for matching and designing systems. As a result, in recent years there have been many issues in two primary areas: defects in the control logic of the EPS in commercial vehicles, and the tediousness of the chassis-tuning process hinders overall vehicle performance (it could take three to four tunings to obtain the expected target.)

“The main reason for this is because domestic independent suppliers and OEMs currently have little experience with the development of EPS systems in many areas such as system matching and calibration,” says Dr. Li Lingyang, senior engineer of application and development of CAE technology at Technical Center of Dongfeng Motor Corporation.

To break the constraints of conventional methods and improve the design and analysis capabilities of the EPS system, Technical Center of Dongfeng Motor Corporation reached out to external resources and sought better development solutions by combining physical testing and modeling simulation. According to Li, the objectives of this research program were to control the early stages of development and design to establish the capability of EPS modeling simulation, and learn the decomposition method of system performance indexes, including:

Based on years of cooperation and after comparing many products, Technical Center of Dongfeng Motor Corporation chose Siemens Digital Industries Software as its partner and Simcenter Amesim as an important application tool for helping to expand to new markets. Simcenter Amesim from Siemens Digital Industries Software provides a multi-domain, complex system modeling and simulation platform. On this single platform, users can create complex multi-domain system models, and then perform simulations, computations and in-depth analysis.

In addition, users can also study the steady-state and dynamic performance of any component or system. Simcenter Amesim is an excellent tool for research and development (R&D) departments in the auto industry, enabling engineers to take full advantage of the complete set of integrated Simcenter Amesim libraries to design a system. All the models from different physical domains have been verified using strict tests and experiences. Using Simcenter Amesim enables engineers to rapidly achieve the ultimate goal of modeling simulation, simulation analysis and optimized engineering design to help reduce development costs and shorten the development cycle.

“Based on our cooperation in the past and the recommendation of other enterprises, we believed Simcenter Engineering services from Siemens Digital Industries Software could bring us more and better added value,” says Li. “Furthermore, Siemens Digital Industries Software greatly outmatched other service suppliers with much more comprehensive and reliable solutions and services.” 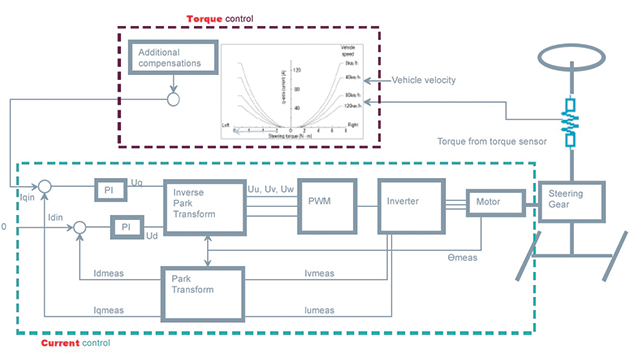 Technical Center of Dongfeng Motor Corporation conducted a project on EPS modeling and optimizing simulation analysis. The object of this project was a Class A vehicle with five seats and an EPS system (in China cars are defined according to capacity and wheelbase. Class A is the largest). This model is now being mass produced. Simcenter Amesim and hardware-in-the-loop are being used in modeling and simulation analysis, and the components and systems have proven to be relatively stable.

Figure 1 is a schematic diagram of the project. Simcenter Amesim is used to create the EPS system simulation models, implement the main components from the Simcenter Amesim library for existing component models, benchmark the parameters against bench test results, and then analyze and verify the sensitivity parameters after corrections are made. The analysis process created according to the project objectives is shown in figure 2. For the modeling process, Li conducted a detailed analysis of the prototype pinion electric power steering (P-EPS) system model. As shown in figures 3 and 4, this simplifies the use of components and select models from the library.

The subject of the research project, the test equipment and requirements for the main mechanically-related components (steering gear, worm gear, motor and column assembly) in the P-EPS system, are shown in figure 5.

In addition, Li said that Technical Center of Dongfeng Motor Corporation created the EPS controller model based on the Simcenter Amesim platform according to the electronic control unit (ECU) specifications provided by the supplier, which was the most important part of this research project. When running on a vehicle, the P-EPS system provided two versions of controller parameters to serve as the calibration basis for models using the ECU control strategy.

With the speed and steering wheel angle signals of the vehicle test as the inputs for model simulation, the simulation outputs, such as lateral acceleration, yaw velocity, vehicle roll angle and steering wheel torque, were benchmarked against the vehicle test results. The driver made a subjective and separate assessment on the effects of the two versions of controller parameters of the P-EPS system, which combined with the objective measuring results, could be used as a directional reference for the subsequent sensitivity analysis.

After benchmarking, it showed the margin of error for the EPS system model simulation results and test measurements was within 10 percent, and the model was more precise than that. 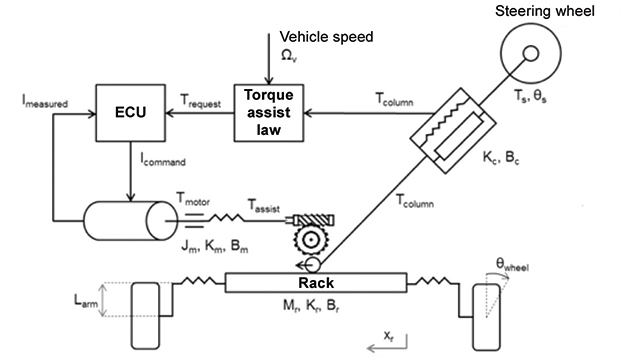 The software can be used to create multi-layer, multi-level models of different complexities: For different subsystems, it can be used for multi-domain, multidisciplinary coupling modeling of electromechanical hydraulic control on the same simulation platform; for joint simulation with multibody system dynamics software, it can be used for matching and integrating dynamic performance of the complete vehicle, while the powerful secondary development capability enables flexible customization and template-based analysis processes.

“By working with the engineering consultation department of Siemens Digital Industries Software, Technical Center of Dongfeng Motor Corporation has improved and refined our product development process, and established a complete index system for the steering system and vehicle integration, greatly improving the vehicle performance,” says Li. “We look forward to continuing to work with Siemens Digital Industries Software to build a multi-domain design analysis platform for the chassis and the steering system.”

Technical Center of Dongfeng Motor Corporation and Siemens Digital Industries Software have formed a strong alliance and are poised to contribute to the continued development of China’s auto industry. 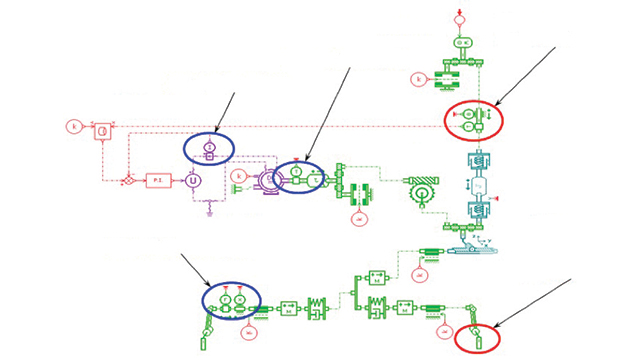