Simcenter Sound Camera gives you more insights into whatever it is that you are testing. It is a great tool for measuring, for gaining insights, and also for troubleshooting. Abrie J. Oberholster, Lead Consultant and Senior Project Engineer Department of Mechanical and Aeronautical Engineering, University of Pretoria University of Pretoria
DÉFIS LES CLÉS DU SUCCÈS RÉSULTATS

The University of Pretoria is a leading research‐intensive university in South Africa, recognized internationally for its quality, relevance and impact, locally and globally. The university supports industry funded projects through research, helping companies achieve safer work environments in the community.

Simcenter Sound Camera gives you more insights into whatever it is that you are testing. It is a great tool for measuring, for gaining insights, and also for troubleshooting. Abrie J. Oberholster, Lead Consultant and Senior Project Engineer Department of Mechanical and Aeronautical Engineering, University of Pretoria University of Pretoria

In South Africa, the mining industry is a major provider of jobs and resources and is integral to the community. Nevertheless, the mining industry has a high prevalence of noise induced hearing loss in workers. For over two decades, hearing conservation programs (HCP) have been executed to improve mine working conditions.

The Mine Health and Safety Council (MHSC) circulated regulations to eliminate occupational noise-induced hearing loss in the mining industry. As the country does not have many national laboratories, it relies on strong partnerships with South African universities. This collaboration between various South African universities, companies, and governmental establishments plays an important role in improving mining safety. 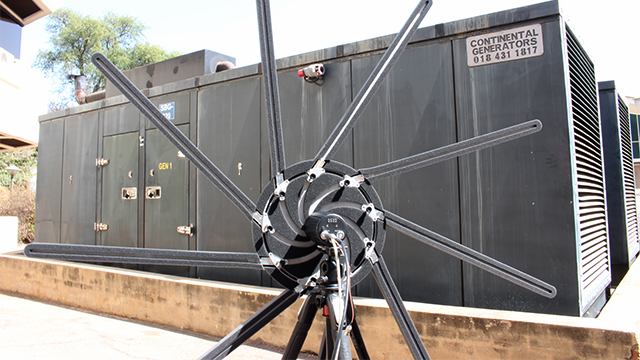 The MHSC is a national public entity established through the mine health and safety act to solve problems in the South African mining industry. Their first goal in the HCP was to decrease deterioration in the hearing of mining workers to less than 10 percent. The second HCP target was to ensure all the mining equipment must not exceed a sound pressure level of 110 decibels (dB) anywhere in the workplace. This included individual pieces of equipment. 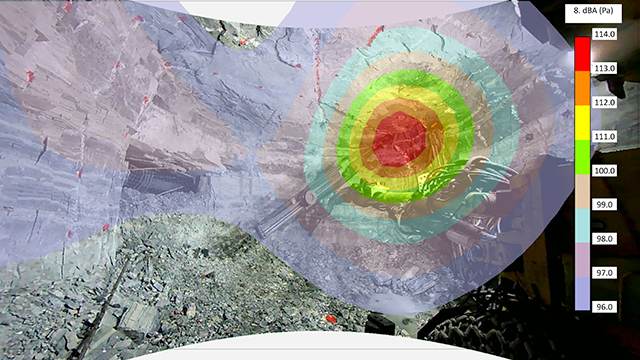 Solving issues in the mining industry

Aside from environmental noise and explosion noise, the noise produced by mining machinery significantly adds to the noise levels that affect miners. Machines are loud, which in turn causes two of the biggest issues in the mining industry: hearing loss complaints from workers and insurance claims for millions of dollars each year. To tackle this problem, the South African MHSC recommended reducing the noise from mining machines prior to the expectation of hearing loss deterioration reduction. The mining industry was not making enough progress in minimizing noise-induced hearing loss. The task was clear: reduce all mining equipment noise levels to help reduce hearing loss from mine workers.

In the past, the industry used sound level meters to measure the noise of the machines in both open space and inside the mines. For sound source localization, intensity-based measurements were done. However, this technique was very labor and time intensive. Once the source of the noise was identified, different modifications were tried on the equipment and remeasured to compare which modification had the most influence on the sound levels of machines.

But with new times comes new technology. The University of Pretoria’s proposal was to localize the source of the sounds faster through new engineering techniques to pinpoint the noise root cause and address it. These techniques would help working towards bringing sound levels below 107dB, meeting the target set by the MHSC and leaving room not to surpass it.

Localizing the source of the sound efficiently

The University of Pretoria was looking to invest in an SSL device that not only allowed them to perform their research more efficiently but also fulfilled different criteria, such as frequency range, mobility, battery operated, and possessed a built-in data acquisition system. The Simcenter™ Sound Camera™ system emerged as the clear choice as it met all of their criteria. Simcenter Sound Camera is a modular, highquality digital microphone array that offers an instant overview of sound sources on any noise-generating object. It combines hardware and software to efficiently localize and quantify sound sources for all types of sound fields. Simcenter is part of Xcelerator, a comprehensive and integrated portfolio of software and services from Siemens Digital Industries Software.

“One major reason for selecting Simcenter Sound Camera is that you can visualize sound and identify noise sources faster and easier,” says Abrie J. Oberholster, lead consultant at the Department of Mechanical and Aeronautical Engineering at the University of Pretoria. “The obvious and very important advantage is that almost anyone who looks at the sound map gets an idea of where the hotspots or problem areas are.”

Oberholster says one of the biggest advantages of the Simcenter Sound Camera is that it can be used for both stationary and non-stationary applications as well as being easy-to-use. “Anyone looking at the sound map or the video captured by the Simcenter Sound Camera could identify the problem areas, as it is quite intuitive with the image showing where the sound is the loudest (red spots).

When you want to measure in a mining site, the conditions are always very dynamic. Previously we had to set the system up and then we had to roam around the system and that was a very tedious process and also required stationary conditions.”

After the university received their Simcenter Sound Camera, Siemens assigned experts to provide training to the university’s research engineers. Soon after, their testing setup was complete and work began on the mining machines. 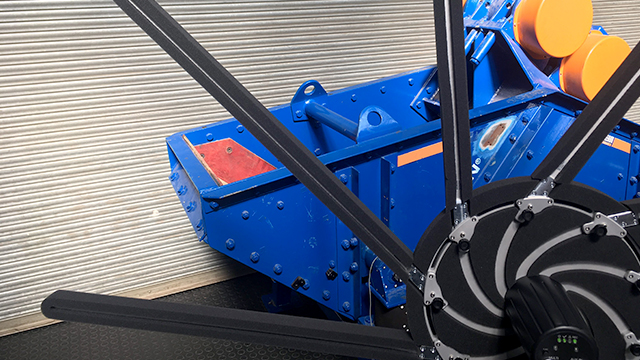 By using the Simcenter Sound Camera, the university discovered interesting insights that were unexpected. They observed that on a pneumatic chainsaw used to remove wooden props in the mine, there was a noise source which caused noise levels to reach 120dB.

Thanks to the visual representation of the noise, they could easily pinpoint the origin of this abnormality. It turned out that the air hose connection was Incorrectly fitted into the pneumatic chainsaw; a problem that was easily fixed.

“Without the Simcenter Sound Camera, it would have been really hard to figure out the cause for such noise. This was a real eye-opener,” says Oberholster. “There is a big difference in efficiency compared to the past, where a sound level meter was used instead. It is unlikely that the old type of measurement would have revealed such problems.”

Using Simcenter Sound Camera, the university could quickly and accurately locate the origin of the sounds. SSL’s advantage is that it pinpoints the problem area. For example, on the chainsaw, if it is something obvious like the hose, it can be easily fixed. However, it is not always easy to find out why it is making noise.

“What makes Simcenter Sound Camera further valuable is that it has additional analogue input channels, allowing you to record signals from external sensors. Other software modules of the Simcenter toolbox further allows you to tackle a wide range of other engineering problems including structural modal analysis, “says Oberholster. “The Sound Camera doesn’t give you the conclusion, but it pin points the location of the problem, and that is where the other parts of the Simcenter toolbox come in.”

Another example of how the Simcenter Sound Camera made the team’s work more efficient was the task of measuring the sound levels of 18 different mining machines. By having the data immediately available, they were able to reach final conclusions within a few minutes. In the past, these type of measurements would take days for the university to finish as only stationary conditions could be measured. In addition to noise levels, the university also obtained unexpected results that come from speed controls, casing holes or loose air hoses. With the Simcenter Sound Camera, they measured different operating conditions with different engine speeds, and in different environments to see how these changes affected the main noise sources.

“Simcenter Sound Camera gives you more insights into whatever it is that you are testing,” says Oberholster. “It is a great tool for measuring, for gaining insights, and also for troubleshooting. Now it only takes us as little as 10 minutes to do a full check on a machine, where before it took us days!” “

Usually, once a “noisy” machine is identified in the mines, it can be brought to the surface to safely measure and test for noise levels. Underground tests are very difficult to do, not only because of their location and the fact that it is a working place, but because they are reverberant environments. Testing machines in these environments is different from testing above ground: the surface ground, the floor reflection, wall, and ceiling reflections are different. It is also difficult to do repeatable tests underground, where the environment is not controlled. They want to predict the noise levels inside the mine based on measurements taken above the ground, where there is a freefield environment.

“One of the big problems was to identify the problem,” says Stephan Heyns, professor and director of the Centre for Asset Integrity Management at the University of Pretoria.

“Once you know that the machine is really noisy, then we really need to ask the question, ‘What must be done?’ In the last few years we started to look and zoom in to identify the root cause of the problem. We have come to the realization that it is indeed possible to do that. Now we perform such problem-identifying tests with Simcenter testing solutions.”

In the future, the University of Pretoria plans to use Simcenter solutions to do research on predicting noise levels generated by the mining machines underground. They would like to characterize the noise of mining equipment on surface and translate that into what it would mean underground and use that information to predict what the sound pressure levels will be, and what noise levels people will be exposed to underground.

They would also like to test the same piece of equipment in the environment of a gold mine, iron mine, diamond mine, etc., as they are all very different environments.

“We want to tackle engineering problems that affect the South African community and its operators,” says Heyns. “It’s not only about making a quieter machine, but also about taking care of the operators that use it. We have done some work and we are on the right track, but we want to improve the type of measurements we do with the help of Simcenter testing solutions to improve our tests and our mining experiences.”

Moins Plus
Learn more about Simcenter