A battle against time

The Motor Sports Unit Development Division (MSUDD) of Toyota Motor Corporation has been using STAR-CD software and Simcenter STAR-CCM+ software for many years to develop race vehicles in a variety of top motor sport categories. The division conducts research and development (R&D) on race cars every day at the company’s Higashi-Fuji Technical Center, located at the foot of Mt. Fuji.

One of the roles of the MSUDD is to develop vehicles for the FIA World Endurance Championship, which includes the 24 Hours of Le Mans. It also conducts R&D on engines and cars for domestic (Japanese) race series such as the Super-Formula and Super-GT series. MSUDD managers, Yuichiro Kato and Teppei Hojo, consider computer-aided engineering (CAE) and computational fluid dynamics (CFD) to be critical to the company’s successful design of race cars. 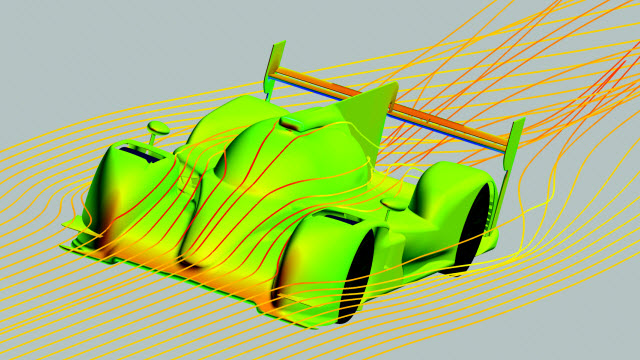 MSUDD has three principles to guide its approach to designing and developing cars that its customers will find both fast and visually stunning. CAE/CFD fully supports all three of them: accelerate the development of advanced automotive technologies through participation in racing; attract new race fans by demonstrating enthusiasm to attack challenges in difficult and unknown technologies; and broaden the range of car enthusiasts by organizing events and other opportunities where people can experience the excitement of driving cars and the dreams that cars can inspire.

Kato’s engine group is responsible for the performance and reliability of engines and hybrid components and uses CAE/CFD for powertrain design and development of new analytical technologies. Hojo’s aerodynamics group is primarily in charge of the development of car aerodynamics, using CFD in the process.

The CAE/CFD team within the MSUDD is a group comprised of around 15 people. With the limited time and resources available to such a small group, competing in the tough world of racing requires a technological standardization that enables the team to prioritize analysis work, coordinate postprocessing schedules (design, test and wind tunnels), and ensure that the analytical results are consistent and repeatable.

Vehicle development is a race against turnaround time

In the world of race cars, developments for the next year, preparations for the next race, and work to accommodate frequently changing regulations are all extremely important. CFD can thus make an important contribution by significantly reducing turnaround time.

“Race cars are not like production vehicles that mature over a span of several years,” says Kato. “Even if the external shape of the most recently designed race car looks identical to the car from the previous year, its internal components are likely to be entirely different. The team is essentially developing a completely new car every year. With such a quick turnaround, the reliability and performance of elements, including the external aerodynamic shape and engine, must be ensured before the car is ever built. The conventional approach has been to undergo a repetitive process of prototype building and testing, but now we are able to conduct thorough analytical assessments before even a single part has been made.”

The aerodynamic designs of Le Mans cars are developed jointly with Toyota Motorsport GmbH (TMG), which is located in Germany. During Toyota’s participation in Formula 1, wind tunnels were central to development efforts, and CFD played a supplemental role. Today, however, CFD is critical to concept testing, and plays an extremely important role in visualizing flow and deciding on vehicle design concepts. CFD plays a key part not only in reducing development turnaround time, but in recent years, in the actual parts development process as well.

“Since there is no time to put a real car in a wind tunnel to make adjustments between races, and because opportunities for track testing are limited, a process is emerging for quickly moving design elements from CFD to actual vehicles, increasing the importance of the CFD output,” Hojo explains. “There is a growing need to make decisions based on initial tests. So the car performance from the very first test determines the competitiveness of a vehicle during the season.”

Of particular importance today are technologies that enable engineers to improve vehicle and component performance in the design and development phase before any manufacturing is done. Using CAE/CFD technologies such as Simcenter STAR-CCM+ is absolutely essential to making this possible considering the industry’s highly demanding development schedules and processes.

For automotive manufacturers, the primary purpose of participating in motor sports, beyond the publicity they generate, is to quickly develop advanced technologies. It is particularly important that companies are able to internally deploy and share technological know-how derived from race car development, and to apply that knowledge to the development of production vehicles.

The aerodynamics development in motor sports happens at an extremely fast pace, which means the best outcome must be achieved in the shortest time possible. For example, the CFD design loop for a single development part lasts about two weeks. The keys to success in this context lie in the performance of as many calculations as possible during that time, and whether they result in the identification of a good solution. For this reason, steady-state calculations are primarily used despite the fact that the actual vehicle aerodynamics include unsteady phenomena and extremely complex flows. Therefore, it is important to find a tradeoff between accuracy and computational speed.

“It is extremely difficult to balance the opposing forces of calculation accuracy and shortened turnaround times,” agrees Hojo. “Because we are constantly under pressure to improve performance by developing new parts, this is one of the most challenging areas. Finding an efficient way to use unsteady calculations during a two-week development cycle would help to solve this problem.”

“With engines, we have faced challenges in the past with regard to calculation accuracy,” Kato adds. “However, it has become possible to achieve strong correlation between simulations and real-world testing. Today, most of the improvements we implemented are having the desired effect at the track. We are currently very satisfied with what we are able to do using Simcenter STAR-CCM+. We are promoting further efficiency improvements through additional automation combined with optimization.”

Le Mans, unlike Formula 1, does not have regulations restricting the time spent on wind tunnel tests. Final decisions are made using the results of wind tunnel tests, but CFD is essential to efficient development under conditions of limited financial resources and time.

The key problems that arise when conducting design and development focused on CFD are issues of reliability or accuracy. For this reason, it is extremely important to validate the simulation approach by checking the correlation between wind tunnel tests and CFD results. To do this, aerodynamic values such as downforce, drag and surface pressure distributions are compared with experimental results such as force measurements and particle image velocimetry (PIV). Because wind tunnels simulate actual conditions, their results are treated as a standard against which to adjust the mesh resolution and calculation settings used in the analysis. To accomplish this, a very large number of calculation cases are usually evaluated.

The aerodynamics group also performs measurements on actual vehicles. Aerodynamic values such as downforce can be obtained while the vehicles are running on the track, providing comparative data against wind tunnel and CFD results. If there are inconsistencies, engineers examine ways to improve the wind tunnel testing and CFD models. There are cases in which CFD accuracy improvements must be implemented in a very short time frame (in time for the next wind tunnel tests and races), while other improvements can be made over the mid to long term.

The engine group conducts stringent evaluations before mounting an engine in an actual vehicle, and only installs the most effective parts based on its findings. Therefore, little evaluation is performed during the race. Irregularities, whether they require an immediate response or can wait to be addressed over the midterm, can be identified quickly.

Record everything in a script and make it easy to use

Kato shares his opinions of Siemens PLM Software’s CD-adapco products and services: “Speaking from my experience of having used various CFD software in the past, I can say this: since most functions in Simcenter STAR-CCM+ and STAR-CD can be managed by scripts, there is no need to open the GUI. It is extremely easy to define operations that can be executed in batch processes, seamlessly allowing connections to optimization and other external software applications. Today, calculations based on fluids alone will not get you very far. Siemens Digital Industries Software’s applications are extremely easy to use in conjunction with the various applications from both upstream and downstream processes. It is also very practical that the script can be read by anyone who sees it.”

On the aerodynamics side as well, everything is executed with a script, including the creation of analytic models, and feedback indicates that it is extremely easy to use once engineers are familiar with it. In aerodynamics, data processing has been completely automated since the introduction of STAR-CD, and everything continues to be completely automated with Simcenter STAR-CCM+. When conducting analyses, it is extremely important that everything is standardized so that no random variations in analytical results are introduced by individual engineers. This ensures that even if new team members join a group, there will be no differences in the analytical results they produce. In addition, since everything is completely automated in the script, internal education is offered to ensure that members understand the script. This keeps the process from becoming a black box and encourages new members of the team to gain important skills for success.

Kato also appreciates the technical support services the team has received as long time users of CD-adapco products. “The technical support engineering team offers very quick responses,” he reports. “When one thinks of a foreign service provider, one might expect that the Japanese office will be treated as a mere relay point, and the content may be sent in a raw format, without having been fully understood, but the level of services has been on par with that of a domestic vendor.” Hojo continues, “The analytical methods are completely established, but we hope that we can work together on technology developments to help speed up the development loop.”