With Rulestream, we have a structure where we can reliably generate a one-off design. Rulestream gives us confidence that what we’re doing is correct. Glenn Huebscher, R & D Manager TLT-Babcock
DÉFIS LES CLÉS DU SUCCÈS RÉSULTATS

TLT-Babcock is a leading provider of heavy-duty air and material handling equipment.

With Rulestream, we have a structure where we can reliably generate a one-off design. Rulestream gives us confidence that what we’re doing is correct. Glenn Huebscher, R & D Manager TLT-Babcock

Although TLT-Babcock fans are typically chosen for the quality of the engineering that goes into them, and the company’s customer-focused service, the company is not immune to pressure from foreign and domestic competitors to deliver fans faster and at lower costs. Given the hundreds of hours required to tailor each fan to a facility’s specific needs, TLT-Babcock management recognized early on the value of engineer-to-order (ETO) software that automates the customization process.

The company initially used the Knowledge Based Engineering solution from Wisdom Systems Inc. on its centrifugal fan product line. “That showed the potential of ETO so we decided to increase our use of the technology,” says Glenn Huebscher, R & D manager at TLT-Babcock. “But we wanted a more interactive ETO solution.” He and his colleagues also wanted a scalable, enterprise framework in which they could capture and structure the company’s design rules. The company evaluated other rule-based systems and found them to be lacking in demonstrable capability and robustness. In addition to scalability, their goal was to have the ETO solution automate the creation of CAD geometry so that the end product of the ETO process was an actual solid model and the related drawings. “The lower-end customization programs we looked at didn’t have that kind range of functionality,” Huebscher says of the MCAD automation tools considered by the company. 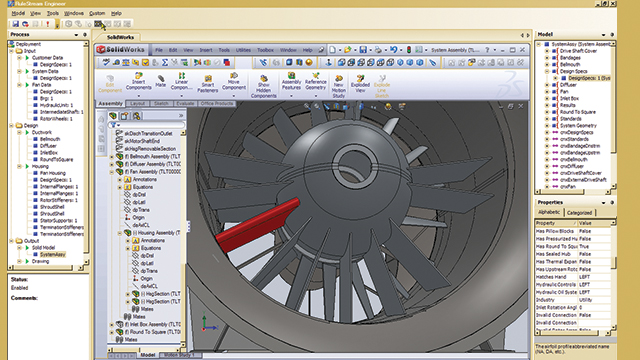 The company currently uses Rulestream to design the most challenging components of its axial fans – the blades and the fan’s steel housing. “The housing is a 10,000 to 50,000-pound machined part, the single most complex component of the fan when considering the number of features it contains and the variations within its possible configurations,” explains Huebscher. “We engineer the housing on every product and, given its many features, the speed at which we design this component has a significant impact on overall project schedule.” Prior to using Rulestream, it took 350 to 400 hours for the design and engineering of a fan housing. “With Rulestream, this process takes about half as long, with fewer people involved. This represents a four-week savings, which is huge,” Huebscher says. “Yet this is still a work in progress. We expect additional gains as we continue to add more rules.”

Proposals are generated faster with Rulestream because “there is a lot less research and looking at past designs,” as Huebscher explains. And because proposals now include more information, including a detailed drawing, cost estimates are more accurate. “The model and drawings give our fabricators more details about what we need,” Huebscher continues. “Ultimately that means fewer cost overruns and fewer opportunities lost due to inaccurate estimates.” More complete proposals are especially useful as TLT-Babcock expands globally. The company uses Rulestream to localize deliverables to the customer’s or vendor’s geographic region. “We’re always getting new vendors as we expand around the world. The accuracy of the proposals and the ability to include drawings helps a lot with that,” he adds.

Another key benefit of the new ETO solution is the accuracy and consistency of the designs it generates. In the past, different engineers would have designed the housing differently, making their own decisions about where to place stiffeners or support vanes, for example. Today all of the engineering knowledge about the housing is captured as rules in Rulestream. “Now we have a strong, repeatable basis for the design,” says Huebscher. This has benefits throughout the fan development process, including after the sale. “With the assurance that all design rules have been applied, we will need less time for typical corrective document quality control, giving us more time for product improvement,” Huebscher concludes. “Conformance to the design rules will also streamline fabrication and assembly by eliminating interruptions when the design is nonstandard.”

Moins Plus
Learn more about our industries