With its 270 institutes spread over nine faculties, Rhein-Westphalische Technische Hochschule (RWTH) Aachen is among the leading European scientific and research institutions. The faculty at RWTH Aachen takes an application-oriented approach to teaching. Therefore, its graduates are sought after as junior executives and leaders in business and industry.

Universities are not only places where scientists, engineers and leaders of tomorrow get educated; they are also laboratories for fostering industrial innovation away from some of the business challenges that industry encounters.

The Rhein-Westphalische Technische Hochschule (RWTH) of Aachen, Germany is one of those schools that strive for excellence in education, research and innovation. The university, founded in 1863, has more than 45,000 students spread over nine faculties and 270 institutes.

One of these, the Institute for Structural Mechanics and Lightweight Design (SLA), has taught and conducted research in the field of lightweight design for more than 60 years. The institute has developed comprehensive expertise in the fields of design, sizing and qualification of space and aerospace structures.

The SLA is heavily involved in an initiative funded by the German Federal Ministry of Economics and Technology and the Deutsches Zentrum für Luft- und Raumfahrt (DLR) space administration, the Intelligent Building Blocks for On-Orbit Satellite Servicing and Assembly (iBOSS) project. The iBOSS project aims to offer a modular approach to enhanced flexibility in future space systems. In other words, it innovates the way spacecraft and satellites are conceived.

Classic satellite design focuses on unique solutions: single-use systems that are costly to develop, difficult to repair and eventually result in space debris. The iBOSS project seeks to introduce a standard that will make it easier to service or extend space systems in the long run. Replacing defects or obsolete modules in space would facilitate extending system lifetime.

Sometimes the simplest ideas lead to great innovation. Think of LEGO® blocks. The iBOSS project recycles the concept of modules that can be interconnected and interchanged, offering a wealth of applications for servicing and repair on the ground or in space. The main building block of the iBOSS system is the iBLOCK, a cube with an edge of 40 centimeters (cm) that weighs approximately 10 kilograms (k). Combining prequalified, off-the-shelf iBLOCK modules enables rapid, on-demand development of iBOSS-based satellites and other flexible space systems.

One of the smartest components of the iBLOCK is the intelligent space system interface (ISSI). iBLOCKs are linked to one another with this highly integrated, standardized four-in-one interface that provides mechanical coupling as well as power, data and thermal interconnection. ISSI enables countless block combinations due to its patented androgynous and symmetric design.

At the SLA institute of RWTH, the engineering team works on qualifying the iBLOCK and ISSI concepts for use in space. In the launch phase of a satellite, the vehicle is subject to extreme vibration and acoustic levels. Dynamic environmental testing helps verify the satellite components and full system will survive the extreme launch conditions and operate normally once in space. Due to their standardized configuration, iBLOCKs could, in the future, require less testing as they become prequalified components.

But for now, testing is required to understand the dynamic behavior of the concepts. Simcenter™ Testlab™ software and Simcenter SCADAS™ hardware, part of product lifecycle management (PLM) specialist Siemens Digital Industries Software's Simcenter portfolio, are virtually the de facto standards for dynamic environmental testing in the space industry. Many large national space administrations and engineers at RWTH rely on these tools to verify that components/products under development can survive space.

Werner Just is test engineer with the SLA institute. Just comments, “I am highly satisfied with Simcenter software and hardware. In an industrial context, the control capabilities of the Simcenter Testlab solution are really excellent and allow for efficient dynamic testing.

“In an educational context, Simcenter Testlab stands out for its amazingly userfriendly interface. There is no comparison when it comes to ease of use. I work daily with the system, but the many students and assistants who come and go are mostly not yet familiar with the software. Simcenter Testlab logically guides them through the testing process, minimizing the time spent on getting acquainted with the software functionalities.” 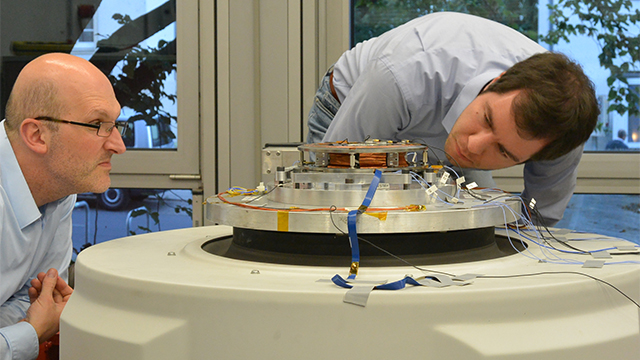 The SLA institute is not the only department relying on state-of-the-art Simcenter SCADAS and Simcenter Testlab for education and research purposes. The Laboratory for Machine Tools and Production Engineering (WZL) of RWTH Aachen University is a successful and forward-thinking research and innovation laboratory that works in the area of production engineering. Again, research activities in this section not only relate to fundamental theories and findings, but also to applying findings in an industrial context.

Johannes Windelen is the technical business administrator of the lab. He frequently relies on Simcenter SCADAS and Simcenter Testlab solutions for a variety of research or industry projects. The systems are used to perform modal analysis on different machinery and production machines. The ultimate goals of these investigations can be as varied as validating the structural properties of a new machine concept, or redesigning or troubleshooting quality issues that occur when increasing the production speed of a specific machine.

WZL has been relying on the Siemens Digital Industries Software solution for modal analysis since 1991. The people at WZL have been highly satisfied with the system ever since then. “Some of our Simcenter SCADAS data acquisition systems have been in use for more than two decades,” says Windelen. “They are incredibly robust. In all those years, we never lost a single data set.” Modern universities value application-oriented education, as do industry players. This is why relying on Simcenter solutions, which are state-ofthe-art and widely used in industry, is essential to the success of RWTH’s laboratories and institutes.