Headquartered in Houston, Texas, and with offices in eight other major cities, Wild Well Control provides its services on a global basis and responds to an estimated 80 percent of the global well control response market. Wild Well Control has successfully capped hundreds of wells worldwide in all kinds of operational environments.

We also use Simcenter STAR- CCM+ to simulate the dispersion and combustion of the hydrocarbons to predict the radiant heat from the fire and understand how that may impact on the surrounding infrastructure and personnel. Alistair Gill, General Manager Engineering Services, Wild Well Control

In the midst of the Persian Gulf War, retreating Iraqi military forces set fire to over 700 Kuwaiti oil wells. The fires were started in early 1991, and it took over 10 months for multiple expert companies to extinguish all fires. The first well fires were controlled in April 1991, and the last well was capped in early November 1991. Workers of the U.S.-based company Wild Well Control (WWC) actively contributed to constrain the human, material and environmental damages.

Founded in 1975, WWC is the world’s leading provider of onshore and offshore well control emergency response, pressure control, relief well planning, engineering and training services. If a well blowout occurs, WWC is called to the rescue. Workers intervene equipped with metal hard hats, fireproof overalls and engineering simulation models! Taking an engineering approach to well control has always been at the heart of the WWC ideology.

Safety is a major concern for the oil and gas industry. At every step of the oil and gas supply chain, it remains essential to safeguard lives, protect the costly assets in and around the wellbore and preserve the environment. WWC engineers rely on the advanced computational fluid dynamics (CFD) technology of Simcenter™ STAR-CCM+™ software to understand and predict phenomena such as fire propagation, heat radiation or gas dispersion. Simcenter STAR-CCM+ is a part of the Siemens Xcelerator portfolio, the comprehensive and integrated portfolio of software, hardware and services.

Modern simulation techniques prove to be an effective way to inform well control decisions and response operations and prevent further incidents and minimize risk. The applications include well control engineering (such as blowout rate, kick tolerance and dynamic kill simulation), subsea plume and gas dispersion modeling to understand where hydrocarbons go in the event of a blowout, radiant heat modeling of a fire, erosion modeling and thermal and structural analysis.

Depending on the issue at stake, WWC uses various simulation techniques to assess and mitigate risks and hazards: well control simulations, CFD modeling of the subsea plume, gas dispersion or erosion or structural analysis. WWC helps its clients understand the physical phenomena occurring in an incident, calculate and assess the risks and the lessons learned so they can ensure a rapid and effective response. 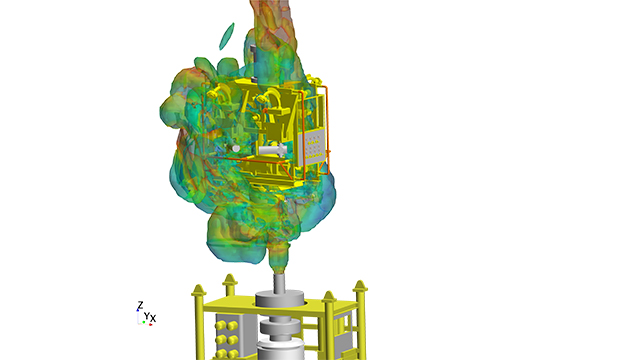 Limiting the effects of leaking hydrocarbons

CFD simulation is particularly helpful when well control events occur below the sea surface. WWC engineers use software such as Simcenter STAR-CCM+ to simulate the transit of hydrocarbons from the seabed to the sea surface.

“One of the most important aspects for us is understanding and predicting the fate of the hydrocarbons from a subsea blowout,” explains Alistair Gill, general manager of engineering services at Wild Well Control. “With that knowledge we can plan to respond safely to the well control incident, save time and money and reduce the environmental impact. Therefore, we need an accurate subsea plume model to understand where flammable hydrocarbons may arrive on the surface.”

“One of our methods for controlling a well blowout subsea is to use a capping stack,” says Gill. “It is lowered down through the water column onto the wellhead. We need to anticipate if installing the capping stack onto the well subsea is feasible or is going to present a greater challenge than normal. In a well blowout, a high-velocity jet of hydrocarbons surges from the wellhead. Using Simcenter STAR-CCM+, we assess whether the hydrodynamic forces caused by the well flow could potentially prevent the capping stack from landing; and, if so, what additional steps need to be incorporated into our capping plan.”

WWC also uses simulation for land-based events. Gill says, “In case of a land well, there is the significant risk of fire and this complicates response efforts.” It is particularly important when multiple wells are located close to the site of a blowout. “Sometimes there are several wells close to each other, so if you have a well-control event on one of those wellheads and it catches fire, the situation can quickly escalate,” says Gill. “We also use Simcenter STAR-CCM+ to simulate the dispersion and combustion of the hydrocarbons to predict the radiant heat from the fire and understand how that may impact on the surrounding infrastructure and personnel.”

WWC also employs simulation to propose preventive measures. The company helps its clients understand potential risks and how to reduce them.

“When hydrocarbon gas is released offshore, there is not only a real danger it could catch fire or be toxic for the people in the vicinity,” says Gill. “It is also important to know or at least to predict where and how much gas will surface if a release takes place subsea. Using Simcenter STAR-CCM+ for simulation, the engineers can improve decision-making and improve outcomes. Simulation also helps us to reconstruct an incident and understand how it came about. If we can find the cause and learn from it, we hopefully can prevent it in the future.” 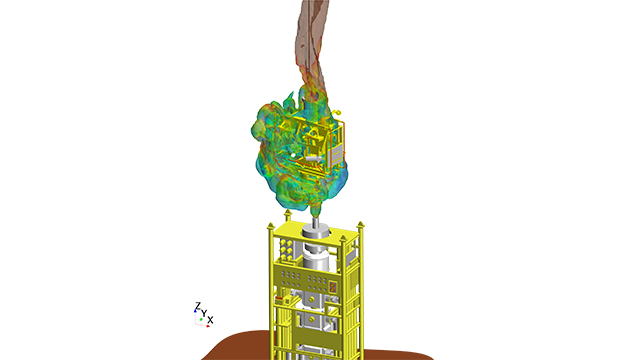 Naturally, applying CFD simulation to understand and predict events is only valid if models are trustworthy. Model validation is essential to gain full confidence in the results, especially when it comes to such a nonlinear subject as fluid dynamics. WWC is part of the Subsea Underwater RElease (SURE) joint industry project (JIP). In this project, WWC collaborates with Sintef, a major research center in Norway and a number of major international oil and gas operators. As part of the JIP, various experiments were performed to validate and develop trustworthy CFD models.

“One of the projects where we try to optimize the simulation of leaking gas has been running for several years in multiple phases,” explains Gill. “The first phase took place in a water tank about 20 feet deep in a lab. The next phase took place in the inshore waters of Trondheim Fjord, Norway. In depths of about 100 feet, compressed air was released and phenomena such as the size, the velocity and the density of the gas bubbles was monitored.” The data captured was used to validate and improve the CFD prediction.

In the next step of the project, natural gas was released in 1,200 feet of water. In that way, engineers can get closer to the conditions of a well control event and adapt the simulation. “By carrying out experiments like this, we can better understand the physics involved and improve the CFD simulation,” states Gill. “The physics involved are complex and the experiments confirmed that when used correctly CFD codes such as Simcenter STAR-CCM+ CFD give us realistic answers.”

Another application of CFD simulation in support of incident prevention is time-to-failure prediction. WWC’s engineers use Simcenter STAR-CCM+ to understand and quantify the impact of sand erosion on the production equipment and predict wear on wall material and components. The objective is to maximize the operational life of production equipment. The CFD simulation is particularly helpful for understanding how sand loading affects parts with complex geometry. It also helps predict changes in the wall profile of pipes. The deforming mesh capability in Simcenter STAR-CCM+ eases the highly non-linear analysis, adapting to the changing profile of a pipe wall eroded by solid particulates.

As surprising as it may sound, simulation is an essential tool to plan for and control fire and blowouts. It helps the engineers accurately understand the physical phenomena of gas dispersion and heat radiation to provide the appropriate emergency response and prevent further incidents. It is also essential to define and apply preventive measures that contribute to a better and safer world.

“We find that simulation is an excellent tool for understanding what we should be doing, what effect this action is going to have, what the hazards are and most importantly, to make sure we are not putting anyone in harm’s way,” says Gill. “We will continue to rely on well control operations teams with metal hard hats and fireproof overalls in the future. But by using reliable simulation techniques, we’re ensuring that we protect lives, assets and the environment to the best of our ability and can resolve an emergency as quickly and as safely as possible.”

We also use Simcenter STAR- CCM+ to simulate the dispersion and combustion of the hydrocarbons to predict the radiant heat from the fire and understand how that may impact on the surrounding infrastructure and personnel. Alistair Gill, General Manager Engineering Services, Wild Well Control