The real value of CFD is to explain the dynamic effects because we have all of the necessary data in the flow field. Dr. Daniel Moëll, Combustion Engineer Siemens Energy
DESAFÍOS CLAVES PARA EL ÉXITO RESULTADOS

Siemens Energy generates and delivers power from numerous sources including the extraction, conversion and transport of oil and natural gas in addition to renewable and alternative energy sources.

The real value of CFD is to explain the dynamic effects because we have all of the necessary data in the flow field. Dr. Daniel Moëll, Combustion Engineer Siemens Energy

Gas turbines play an increasingly critical role in delivering energy security, dynamically evening out the peaks and troughs in production from intermittent power sources such as wind, solar and hydroelectricity. However, efforts to reduce nitrogen oxide (NOx) emissions have the potential to introduce thermoacoustic oscillations that can limit the operation range of low-emissions gas turbines. 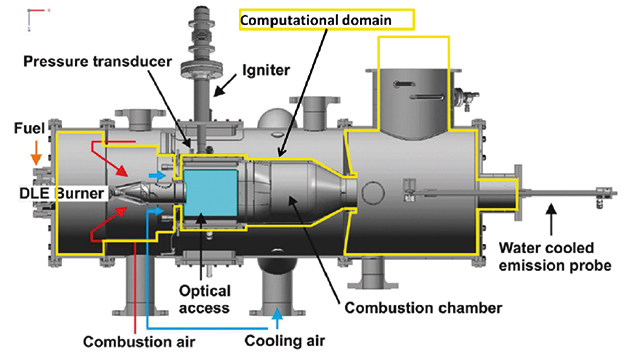 The changing role of gas turbines in a clean energy future

Although natural gas is obviously a fossil fuel, when compared with oil and coal it releases much less carbon dioxide during combustion. In comparison, with a new coal-based power station, modern gas turbines generate 50 to 60 percent less carbon dioxide (CO2) per megawatt hour (MWh) of electricity generated. The International Energy Agency estimates that switching from coal to gas has saved over 500 million metric tons of CO2 emissions in the past decade, the equivalent to the savings that would have been generated by putting 200 million electric vehicles (EV) on the road during the same time period.

From an air pollution point of view, gas turbines are also running cleaner than ever. With the almost universal adoption of lean premixed combustion technology where fuel is mixed with air to reduce the temperature of combustion, modern gas turbines routinely deliver single-digit NOx emissions when operating at full load.

Despite everything that has been done to make gas turbine technology cleaner and more efficient, the industry faces several key challenges from the way the technology is being deployed. Originally designed for producing base-load electricity, operating continuously at full power gas turbines are increasingly required to provide a more dynamic-load capability. With aging nuclear plants providing most of the steady-state base-load and increasing wind and solar capacity providing a fluctuating intermittent load, gas turbines are now necessary to even out the peaks and troughs between other power sources.

Simply put, gas turbines are what keep the lights on when the sun isn’t shining, and the wind isn’t blowing. Gas turbines are ideal for this role as they can be started up in minutes and ramped up and down quickly as load requirements change. However, the operating envelope of a modern low NOx gas turbine may be limited by thermoacoustic oscillations. 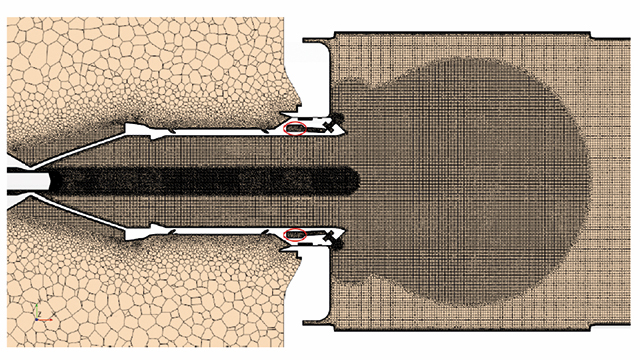 Although DLE systems are extremely efficient in reducing NOx formation they do present additional engineering challenges, many of which are related to thermoacoustic instabilities that are more prominent in premixed combustion systems operating close to the lean limit. Thermoacoustic instabilities are highly undesirable oscillations that are generated by the interaction between the acoustic field and combustion processes.

“The most serious thermoacoustic effects are a consequence of premixing,” says Dr. Moëll. “Older non-premixed systems are incredibly stable but have very high NOx emissions. If the flame temperature becomes too low, the heat released is not high enough for the combustion to be stable because it’s a high-speed flow that we are trying to stabilize the flame in. This results in stability issues.”

These instabilities can significantly reduce combustor performance. If not properly controlled, the instabilities can cause self-sustained large amplitude oscillations that may cause additional wear and tear, or even catastrophic destruction if they excite the natural frequencies of the turbine structure. All modern gas turbines are equipped with automatic safety control systems that prevent this from happening, but shutdown of the turbine means loss of power generation, so this needs to be avoided.

“The dangerous thing about thermoacoustic instabilities is they contain a huge amount of energy,” says Dr. Moëll. “For example, an SGT-800 turbine generates 130MW of thermal power, so if you generate an instability, you have an almost infinite amount of power to drive it, operating at thousands of cycles per second. Uncontrolled, they have the potential to cause significant damage.”

Although thermoacoustic instabilities are well understood and well managed in industrial gas turbines operating at close to full load, they can become more problematic under partial loads, or for different mixes of fuels. 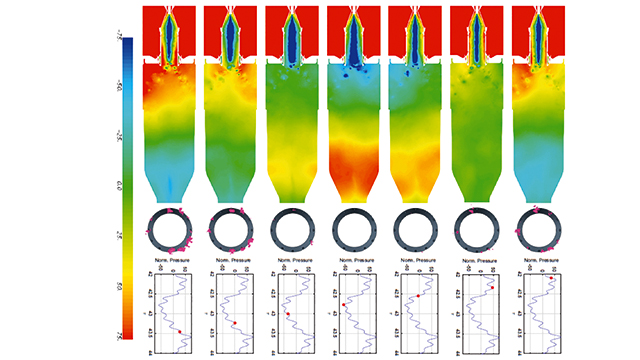 “Previously the only way of investigating dynamic thermoacoustics effects was on an actual engine on a test-bed,” says Dr. Moëll. “You have to run the engine, measure the dynamics, stop the engine and then work out how you are going to damp out the oscillations and run the engine again to see if the problem is fixed.”

Not only is this trial and error approach time-consuming and expensive, but it doesn’t give much insight into the combustion instabilities that ultimately lead to the thermoacoustic vibration. Dr. Moëll and his colleagues turned to CFD to improve their understanding of how these thermoacoustic oscillations originate, aiming to dampen them out in future generations of gas turbines.

Although CFD is used extensively to design gas turbine combustion systems, the majority of simulations use Reynolds-averaged (RANS) turbulence models. These model the overall influence of turbulence instead of predicting the motion of individual turbulent eddies. While this approach works well for understanding most fluid dynamics, it cannot reasonably predict an inherently transient phenomena such as the thermoacoustic behavior of a pre-mixed gas turbine combustor.

Instead, Dr. Moëll and his colleagues adopted a more fundamental approach to simulating turbulence, using Simcenter™ STAR-CCM+™ software. Simcenter is a part of the Xcelerator portfolio, a comprehensive and integrated portfolio of software and services from Siemens Digital Industries Software.

LES is a transient technique where the large scales of the turbulence are solved explicitly, and the small-scale motions are modeled. Whether a turbulent eddy is resolved or modeled depends on the local grid resolution, a consequence of which is that LES calculations require fine computational meshes and small timesteps. In comparison to the stationary RANS methods (which model rather than resolve turbulence), LES is computationally very expensive, and until recently, prohibitive at an industrial scale.

“The barrier until recently has been down to computational cost: these are expensive calculations,” says Dr. Moëll. “Ten years ago, LES simulations were completely out of the question. It’s only in the last 2 to 5 years that these types of calculations have become feasible on an industrial scale.”

In a recent ASME paper titled: “Large Eddy Simulation and Experimental Analysis of Combustion Dynamics in a Gas Turbine Burner,” Dr. Moëll and his colleagues validated an LES simulation of a gas turbine burner fitted to an atmospheric combustion rig. This burner, from the Siemens SGT-800 gas turbine, is a low NOx, partially premixed burner, where preheat air temperature, flame temperature and pressure drop across the burner are identical to engine full load conditions. The simulation captured all the geometric detail present in the real combustion chamber, with a computational mesh of 28 million cells. The mesh was most refined in the swirler, mixing and reaction regions of the turbine geometry. The cell size in the flame region and most of the mixing region was less than one millimeter.

When compared with experimental observations on the same rig, the LES results showed good agreement and predicted the principle mechanisms that ultimately cause thermoacoustic oscillations.

“The LES predictions show good overall agreement with experimental data in terms of the mean flame structure and pressure fluctuations that are produced,” says Dr. Moëll. “More than this, the simulations revealed the mechanisms behind the pressure fluctuations we observed on the rig. Axial movements of the flame are coupled with the pressure drop across the burner and the local swirl number, acting as a force/feedback loop between velocity, pressure and local flame position. The axial flame pulsating is interacting with an acoustic mode generating axial pressure fluctuations in the combustion chamber.”

Dr. Moëll continues, “In addition to the two dominant axial pressure fluctuation modes, a mode acting in the cross direction of the combustion chamber is discovered. This pressure wave is bouncing between two of the four combustion chamber walls and is triggered by the general flame movements.”

Once validated, the Simcenter STAR-CCM+ simulations provided a wealth of insight and engineering data.

“The real value of CFD is to explain the dynamic effects because we have all of the necessary data in the flow field,” says Dr. Moëll. “Once you have demonstrated the CFD result matches the experiment, you can go into much more detail in investigating flow phenomena through postprocessing and data analysis. You can look at the detailed coupling between vortex structures, heat release and acoustics. You can then start to answer the important question, ‘How can I change the flow field to improve the dynamic performance of my gas turbine, with fewer emissions and more stability?’”

Although natural gas (principally methane) is by far the most commonly used fuel for gas turbines, synthetically generated non-fossil fuel gases, such as hydrogen and ammonia are gaining in popularity. These can be mixed with methane to further reduce CO2 emissions. However, changing fuel mixes is another potential cause of thermoacoustic instability, something else that LES simulations can offer insight into.

“Understanding this coupling between fuel and transient flow effects is of significant importance to gas turbine developers,” says Dr. Moëll. “On a global level, using different fuels results in different flame shapes and different flame positions, which is one of the things that we can easily simulate using CFD, but it is very difficult to measure on a test-rig. We can also predict changes in dynamic response that will alter the thermoacoustic behavior of the system by using a different fuel, where the heat release is slightly different.”

The possibilities are endless here – for example, another way of dealing with the intermittent nature of wind could be to use excess wind power to manufacture hydrogen to be used as pure fuel for electricity-producing gas turbines that run at night, without CO2 emission. Of course, the different chemical properties of a hydrogen flame might lead to changed combustion behavior, which also needs to be mitigated using LES CFD simulations.

“This is where CFD is really useful. You can try running an actual gas turbine on a different fuel but evaluating the downstream impacts on the entire gas turbine system is very difficult without simulation,” says Dr. Moëll.

“Our study shows that LES has the potential to capture complex flow/flame/ acoustic interactions in real gas turbine geometries,” says Dr. Moëll. “This has two benefits. First, detailed information regarding flame stabilization and its impact on the thermoacoustics may be provided, which is of great assistance for gas turbine developers.”

Having successfully demonstrated the ability of Simcenter STAR-CCM+ to predict thermoacoustic oscillations, Dr. Moëll is confident this type of simulation can eventually be routinely deployed in the design of future generations of gas turbines.

“CFD is a useful pre-screening method for new technology and a useful explaining method. If something does introduce new combustion dynamics, we can explain why and then make appropriate design changes in response.”