Pfaffenhofen on the Ilm, Germany

Solid Edge has been growing with our company for 16 years. For us this continuity means consistent, unequivocal compatibility of all of our drawings and 3D models. Günther Hecht, Founder and CEO Hecht Technologie
CHALLENGES KEYS TO SUCCESS RESULTS

Hecht offers solutions that make the use of bulk solids safer, easier and more efficient.

Solid Edge can cover all of the different requirements of freeform surfaces for endless screws all the way to sheet metal unfolding, piping and cabling. It is ideally suited for plant construction. Florian Sondermeier, Designer Hecht Technologie
Partner Highlight

Solid Edge has been growing with our company for 16 years. For us this continuity means consistent, unequivocal compatibility of all of our drawings and 3D models. Günther Hecht, Founder and CEO Hecht Technologie

Every material requires its own solution

Founded in 1978, when Günther Hecht came up with some innovative ideas for handling dry bulk solids, Hecht Technologie GmbH has become a specialist in this industry, developing and installing turnkey plants for the global market. More than 80 employees, along with external production suppliers, turn Hecht’s knowhow into high-quality solutions.

Handling dry bulk solids involves finding solutions to problems that are as different as the materials themselves. The materials can be pharmaceuticals, foods or nutritional supplements, chemicals, or minerals – all of which have different flow properties, structures and weights. Many marginal conditions also play a role. In the discharging, filling, conveying, metering and sampling of these materials, employees, the product and the environment must be protected.

Typically, a project manager develops a proposed solution. Existing systems are arranged into a proposal drawing and a cost estimate is prepared. The detailed work begins with the order. All the components of the entire plant, which is often multilevel, are tested, adapted to the target conditions, customized and designed in detail, down to the last screw.

“Together with the project manager, we then go over the assembly, connections for power and compressed air, and also questions regarding operator safety, product protection and explosion prevention,” explains Florian Sondermeier of the Hecht Technologie design department. 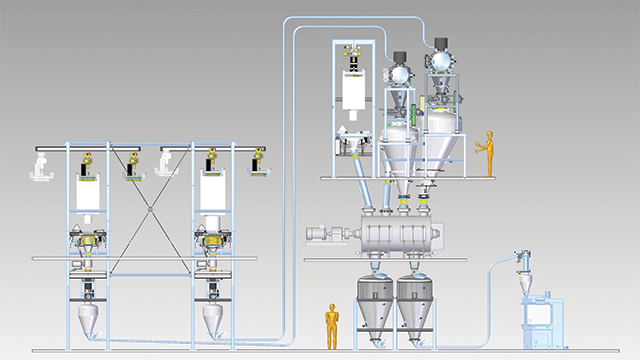 An assembly such as this contains up to 4,531 individual parts

Upgrading to 3D with Solid Edge

“Solid Edge was attractive to us because of its simplicity and intuitive user interface, its well thought-out 2D functions, and its interface to our previous CAD system, which allowed the seamless transfer of all the drawings to the new system,” says Christof Stock, CIO at Hecht Technologie.

Sondermeier started in design at Hecht Technologie in 2000, using an earlier version of Solid Edge. “With other systems, I nearly clicked myself to death doing my work, the same work I was able to get done with Solid Edge in just a few steps,” he remembers. “I was very surprised at what the product could do with respect to simplicity and speed.”

Today, the company has 14 Solid Edge workstation licenses; 10 floating licenses are available to people involved in activities such as sales, project management, marketing and assembly. Ultimately, Solid Edge will be used at every workstation in the corporate network. 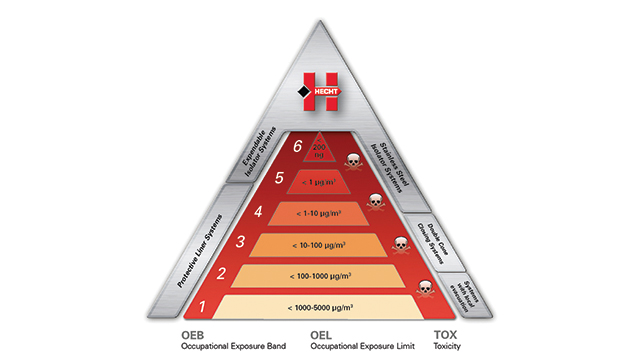 The marginal conditions in handling bulk solids change with the application sector.

With its own product data management (PDM) system (named Speedy), Hecht Technologie has closed the gap between its enterprise resources planning (ERP) system (called ams.erp) and Solid Edge. Speedy has been integrated into the user guide for Solid Edge. Now, at the press of a button, a user can transfer parts list information, update modules and save complete production documentation as PDF and DWG files to an FTP server, where subcontractors can retrieve them.

Additional features give designers an overview of the entire system, including module classifications, an image database whose contents are linked to the modules, and automatic classifications of complete plants. In the event of changes, the entire structure is set to “invalid.” A service automatically updates all of the documents. “This development benefited considerably from the openness of Solid Edge and the opportunity to access information via its application programming interface (API),” says Stock.

This modular nature of Solid Edge offers a great deal of convenience for designers. For example, purchased parts are kept in their own folders, color-coded by price group. Screws can be used as variables to which concrete properties can be assigned later. 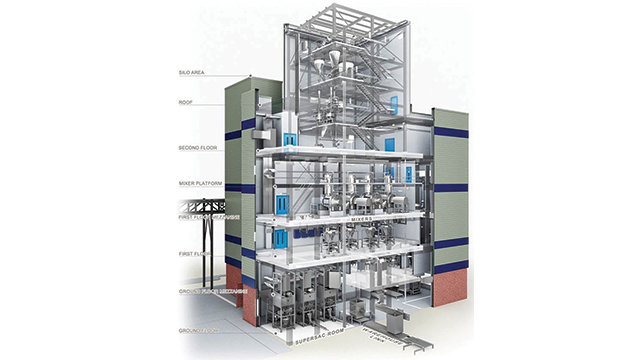 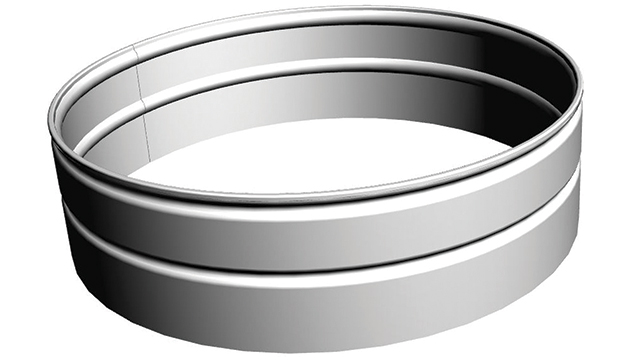 In spite of different beads, the material consumption of these cones is now calculated perfectly.

Widespread use of all Solid Edge functions

With the exception of some connection systems and loading gears, every component in a design must be modified for each new system the company produces. “On the one hand, we want our customers to be able to pack as many processes as possible into a system,” says Sondermeier. “On the other hand, each bulk solid behaves differently.”

This results in an incredibly broad range of design tasks, for which each feature of Solid Edge is used. “Solid Edge can cover all of the different requirements of freeform surfaces for endless screws all the way to sheet metal unfolding, piping and cabling,” says Sondermeier. “It is ideally suited for plant construction.”

Solid Edge with synchronous technology is used for importing customer data, which allows third-party data to be directly imported and re-used more easily. Several functions for simplification of large modules make the work even easier. “Even very large assemblies can be processed in a reasonable amount of time with Solid Edge,” says Sondermeier.

New functions of Solid Edge for frame design are used for a variety of purposes, such as the definition of hoses. “A master curve is defined, which is developed as a hose from the parts list,” explains Sondermeier. A new function of Solid Edge for drawing contours in sheet metal immediately led to advances in the development of three huge cones. “In spite of different beads, the length of the material was calculated perfectly,” he notes. “The finisher was satisfied.” The designer believes the new “steering wheel” feature of Solid Edge is a huge step forward in the user interface. “In spite of more and more functions, it is always clear what the functions are for. Therefore, you have fewer errors and mis-clicks,” he adds.

Feast for the eyes

Attractive renderings created with Solid Edge were used in the new Hecht Technologie brochure about ProClean®, its new cleaning system for bulk solids. “These illustrations would have cost a small fortune at our agency,” says Hecht marketing manager Matthias Hänsel. He created the renderings himself using the Explode, Render, Animate (ERA) functionality of Solid Edge. ERA allowed him to simplify views, define surfaces, and set highlights and shades.

Since Hecht Technologie adopted Solid Edge, many other CAD systems have vanished from the market. Hecht values the fact that Solid Edge is upgraded continuously on the existing data platform. “Solid Edge has been growing with our company for 16 years. For us, this continuity means consistent, unequivocal compatibility of all of our drawings and 3D models,” says Hecht.

The company deliberately relies on the latest version. “With each new release, there are 10 to 12 important innovations. Performance and overall handling improve as well, especially times required for opening, updating and saving files, which have been greatly reduced,” says Sondermeier. “With the new version of Solid Edge, we are making great strides forward. We benefited from the improvements already in the first week,” adds Stock.

Siemens Digital Industries Software partner, Solid System Team, also makes a significant contribution to Hecht Technologie’s use of Solid Edge. Experts give professional presentations, followed by training sessions. “Our training sessions focus directly on our problems,” says Stock. “The speaker goes into detail about our questions.” Solid System Team’s hotline gets good ratings for quickly determining the right solutions. “When you make a mistake importing a STEP file, you can wind up starting from scratch after spending six hours on the computer,” says Sondermeier. “It’s really a lot of fun when a well-trained employee is able to offer support in a short period of time.”

Solid Edge can cover all of the different requirements of freeform surfaces for endless screws all the way to sheet metal unfolding, piping and cabling. It is ideally suited for plant construction. Florian Sondermeier, Designer Hecht Technologie