Developing a new “made in America” bicycle

Developing a new “made in America” bicycle

While I can see the design in my head, using Solid Edge helps me convey my ideas to other people. Clayton Smith, CEO Cmith Manufacturing Company
CHALLENGES KEYS TO SUCCESS RESULTS

Cmith Manufacturing Company is designing and building a new “made in America” Cruiser and City bicycle.

The availability of advanced materials, including a new type of stainless steel tubing, advanced technology such as the Gates belt drive system along with the advanced design technology provided by Solid Edge, drove our decision to do this. Clayton Smith, CEO Cmith Manufacturing Company

While I can see the design in my head, using Solid Edge helps me convey my ideas to other people. Clayton Smith, CEO Cmith Manufacturing Company

Using Solid Edge® software from Siemens Digital Industries Software, Clayton Emory Smith IV is making a dream come true: establishing a new, high-quality American bicycle brand. The Smith family has been in the bicycle business since the late 1940s as a whole-saler and a manufacturer, making the last Western Flyer nostalgia bicycle for Western Auto, and Emory branded-bikes. They also served as a major distributor of Schwinn bicycles.

In recent years, bicycle manufacturing has largely moved to Asia. While China is now the world’s largest manufacturer of bicycles, absorbing brands such as Schwinn and Huffy, Cmith Manufacturing Company (Cmith) will soon become a competitor. The company is now putting the final touches on the new Emory VR-1, which will debut at a national bike show in September, 2014. Smith plans to compete against low-cost Asian manufacturers by building bikes with superior design using high-quality materials. “If we can get this bike going, it will almost be like we’re restarting an industry based on quality and durability,” says Smith.

The VR-1 features a stainless steel frame with SKF tapered roller bearings and an optional seal system similar to those used in automobiles. “You could ride the VR-1 in salt water with the same effect as a car,” Smith says. A high percentage of the bike’s parts are made in America, including Continental’s runflat tires and Gates’ Carbon Drive® belt system. When finished, the Emory will have the highest ”American Made Index” of any unit currently available.

Many of the parts are fabricated at the Cmith factory, including the front hub, fork, wheels, head set, bottom bracket, handlebar, stem, seat post, kickstand, carrier and fenders. The leather saddle and frame tubing are made in America, with the tubing double-butted in England. The gearbox is sourced from Shimano, a wellknown Japanese manufacturer.

“By controlling the manufacture, we can control, to some extent, our destiny,” says Smith. “Like a Rolex watch, we offer durability, longevity, pride of ownership, dependability and practicality. The forever nature of this bike will make this the most affordable bike anyone could ever buy.” 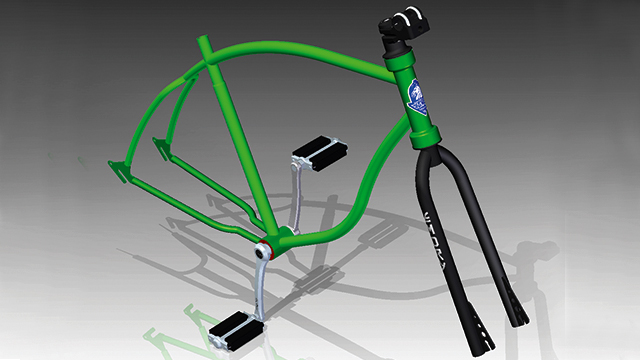 Smith has wanted to get back into bicycle manufacturing for years, and his use of Solid Edge in the design of products for a sister company’s stamping and tool and die business helped inspire him to live out his dream. “The availability of advanced materials, including a new type of stainless steel, advanced technology such as the Gates belt drive system along with the advanced design technology provided by Solid Edge, drove our decision to do this,” notes Smith. “A light bulb went off in my head. I realized we could use new technology to help us revitalize bicycle manufacturing in the USA.”

He is convinced that Cmith Manufacturing can compete against Asian manufacturers by building bicycles with parts made of better, stronger materials. “Walmart sells millions of bikes from suppliers who are under great pressure to keep prices as low as possible,” Smith says. “You keep prices low by using the thinnest metal you can find and the simplest and cheapest manufacturing processes possible. The results are bikes that just don’t last very long.”

By contrast, the VR-1 will be a long-lasting, high-quality machine. “Our target market is bicycle enthusiasts who appreciate quality,” Smith says, “As well as the 75,000,000 baby boomers who don’t want to be bent over like a pretzel; folks who want to ride on the beach or around the neighborhood for health and recreation. And don’t forget the green aspect of bicycling. This is the perfect bike if you live close to the coast. There will be no rust or corrosion as everything is made of stainless steel or anodized aluminum.

“Because we make our own parts, we control our environment and the quality of our product,” Smith says. A self-taught Solid Edge user, Smith has been using the software since the mid-1990s. He has taken a top-down, 3D approach to design from the beginning. He started with a drawing board and went straight to Solid Edge. “Using Solid Edge enabled us to produce our own blueprints for the shop floor instead of having to farm out that work, which is both expensive and time-consuming,” he says.

The software also aids in visualization. “I can show people my product on the screen with realistic views,” says Smith. “While I can see the design in my head, using Solid Edge helps me convey my ideas to other people.”

Solid Edge is playing a key role in Cmith’s venture, according to Smith. “We simply couldn’t have designed and built the VR-1 without the help of Solid Edge.” 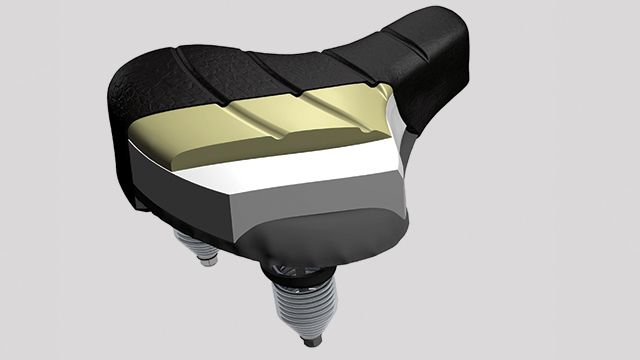 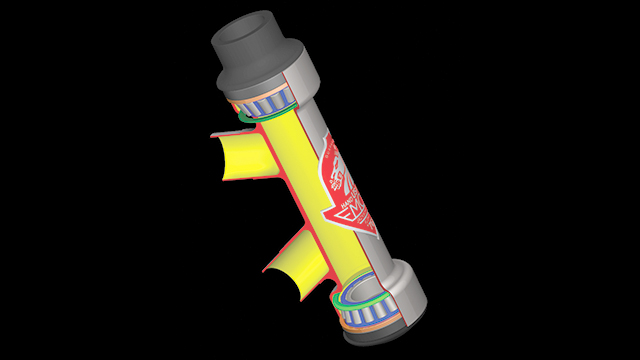 The availability of advanced materials, including a new type of stainless steel tubing, advanced technology such as the Gates belt drive system along with the advanced design technology provided by Solid Edge, drove our decision to do this. Clayton Smith, CEO Cmith Manufacturing Company