We are grateful to Siemens Digital Industries Software for supporting this important opportunity for the students’ research activities and future employment. Professor Takeshi Toi, PhD , Faculty of Science and Engineering Department of Precision Mechanics Chuo University

In the summer of 2014, seven senior students from the laboratories of Professor Takeshi Toi and Professor Nobuyuki Okubo – representing the Department of Precision Mechanics in the Faculty of Science and Engineering at Chuo University – won the Japan Electronics and Information Technology Industries Association (JEITA) Design Contest 2014 with an almost perfect score.

The purpose of the contest was to give students a better understanding of the issues and benefits of applying 3D annotation (3DA) model guidelines, on a practical basis, as part of JEITA‘s activities to establish standards for effectively using computeraided design (CAD) information, advancing manufacturing technology and promoting product development innovation. The university and high school participants competed using CAD tools to create 3D models, 3D annotations and 2D plans based on actual product specifications.

In total, students from 10 universities and high schools participated in the contest. The students were able to deepen their understanding of the specifications required for design through preliminary training by JEITA and periodic design reviews. Working under equal conditions, each team freely selected a 3D CAD system to undertake the challenge.

The Chuo University design team has been utilizing NX™ software for computer-aided engineering (CAE) analysis in its research activities, and chose NX for the competition. Product lifecycle management (PLM) specialist Siemens Digital Industries Software, which owns and develops the software, provided an NX license as part of its GO PLM™ program, which supports educational institutions around the world.

Using 3D CAD outside the classroom The contest challenge was based on a smallsized printer to be productized. The task included generating detailed specifications, such as attaching a liquid crystal panel with a constant force and considering the mold‘s draft angle.

The participating team members, including Koike Takaaki, Saiki Tomohiro, Uchida Koichi, Terauchi Shohei, Nagano Jyunya, Matsuoka Suguru, and Yashima Masataka, had experience using 3D CAD technology in their university courses, but had only operated the systems to create designs for their course work. Moreover, they had used NX for CAE analysis, but not for machinery design. They had also studied tolerances and annotations, but didn‘t understand how to use them to create a design or determine effective dimensions.

To begin, team members gathered to propose and debate ideas. However, there were too many ideas to settle on just one. “Everyone stated their own opinion,” explains Takaaki Koike, a senior at Chuo University and design contest team leader. “Design direction was decided by saying ‘let‘s do this!‘ and figuring we could change it later. It was difficult to decide on what everyone‘s roles and responsibilities should be. Individuals have their own strengths and it took some time to realize the best role for each team member.”

Ultimately, roles were assigned, including CAD operations, analysis, and specifications inspection. One particularly difficult aspect of this challenge was delivering the mold design. Knowing how to set the draft angle of a mold is typically part of the accumulated know-how of an experienced organization, and the students lacked such experience. “We had a really difficult time figuring out the exact values on our own,” notes Tomohiro Saiki, a senior at Chuo University and the team’s CAD operations manager.

Moreover, this was the first design contest these students had participated in. They gained valuable experience simply by exploring solutions. Corporate designers volunteered their time to conduct JEITA design reviews and provide rigorous feedback. The students were proactive and enthusiastic about asking questions about their design in terms of both aesthetics and functionality. They wanted to know whether their design approach had merit. They valued the advice they received, employing it to implement substantial improvements. 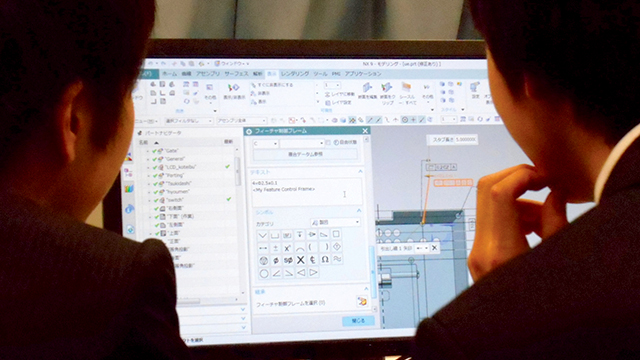 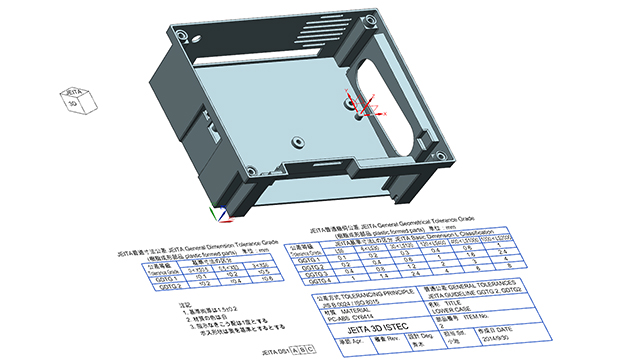 The contest assignment was announced in June; the deadline for submitting the entry was in September. During this period, participants did not have a lot of time to concentrate on the contest because of graduate study and conference presentations. In fact, the deadline came upon some teams before they had time to finish the design. However, the Chuo University team quickly learned to use NX; as a result, it produced high-quality output on schedule.

NX made a big difference in meeting the team’s design objective and due date. “I felt that the 3D CAD technology we used in class was difficult to understand and hard to operate, especially because we don’t have enough time to get use to the operation.” says Koike. “NX is different from these systems. It is intuitive and easy to use.”

“The menus and icons of NX are easy to understand,” adds Saiki. “You can find what you want to do by following the menus. Since all of the menus have a similar configuration, once you learn one, it feels like your range of understanding increases at an exponential rate.”

Koike notes, “As you gradually understand the functionality, you get a better sense of what you can do with the software. Discovering a new feature makes it fun and, before you know it, you are hooked on NX.”

With the assignment nearing completion, the number of design reviews increased. The team used NX to view the 3D model. This expedited debate and collaboration in moving toward the final design. The team easily examined alternative design scenarios by simply changing the numeric values of the model’s components, which helped accelerate a decision regarding the printer’s final shape.

The team also called upon the powerful functionality of NX during the difficult mold design phase. Saiki recalls, “There was one spot that, no matter what we did, the draft angle just wouldn‘t fit. However, once we realized that NX includes many selectable types during set up, it was really quite easy to do.”

The team’s hard work and adroit use of NX resulted in winning the Japan Electronics and Information Technology Industries Association (JEITA) Design Contest 2014 with a nearly perfect score. At the awards ceremony, some of the other teams said that their CAD system stopped working during the modeling process. Others noted that filling in the 3D annotations was difficult.

Conversely, the Chuo University team felt that its use of NX was exceptionally fluid. Koike explains, “We used other CAD technology while conducting research, but doing so required many hours to actually understand how to use those tools and, sometimes, we weren’t able to fully utilize them.

By contrast, NX is a deep solution, it is easy to use, and we were able to fully engage its strengths.”

Saiki adds, “It was great to be able to execute our ideas as expected. After the contest, I actually tried some tasks using other CAD tools, but they lacked a number of capabilities. I thought to myself, ‘With NX, I could readily complete these tasks.’” 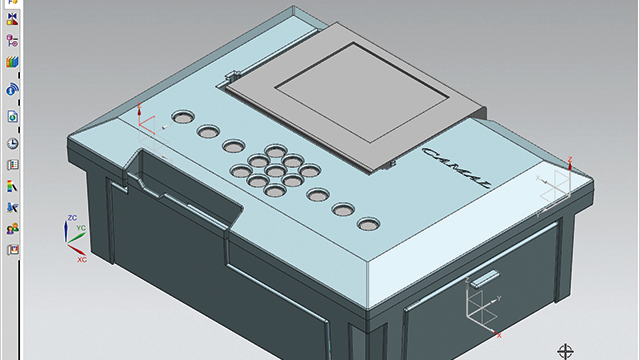 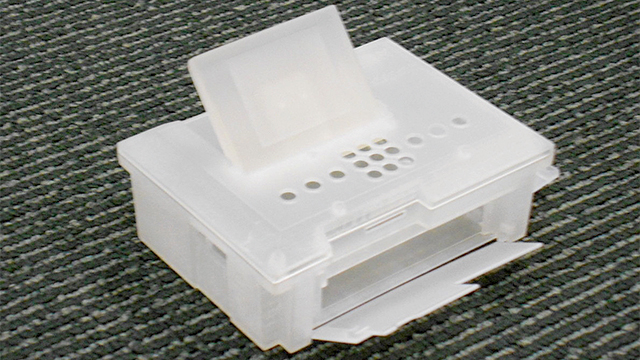 The parametric modeling functionality of NX was used to prepare the original design, with the software’s synchronous technology employed to modify design details and complete the final model. At first, the team thought it would complete the design without using synchronous technology. However, as the team got closer to completing the model, it realized that the parts would interfere with each other.

It would have been difficult at this stage to go back to the early design to make modifications, instead of using synchronous technology – a powerful tool that allows component changes to be made late in the process without affecting other parts.

The use of 3D annotations was also a key point in the design contest; however, the students only had experience with handwriting 2D annotations of size tolerance and geometrical tolerance. NX made a significant difference here as well. Views can be freely defined using NX, and 3D annotations can be assigned to each view. As a result, the students were able to create a professional-quality model with an easy-to-read set of annotations. As the 3D model changed sometimes after adding the annotations, the students were pleased to see that NX automatically highlighted the impacted annotations, facilitating a smooth editing process.

An edge – both academically and in the real world

The Chuo University team was a bit hesitant at the start of the contest, but by the final stage of design development, the individual members came together as a group, pushing collaboratively and aggressively towards its objective. Spending as many as 14 hours a day on the project, Saiki explains, “I was motivated by thinking that the contest would be really helpful in my work after I join an automotive manufacturing company, and it made me very dedicated.”

“Through GO PLM, we acquired Siemens Digital Industries Software’s advanced NX system prior to the contest,” says Dr. Takeshi Toi, a professor on the faculty of Science and Engineering in the Department of Precision Mechanics at Chuo University. “The students were able to use NX to apply the knowledge acquired in their university classes to real-world design. In addition, participating in the contest aided their development by teaching them about the rigors of enterprise-level design and teamwork with their peers. Winning the contest also really boosted their confidence. We are grateful to Siemens Digital Industries Software for supporting this important opportunity for the students’ research activities and future employment.”

Filled with knowledge and enthusiasm after their victory, the students are looking ahead to their next design challenge.