The University of Bordeaux is ranked among the top French universities for the quality of its education and research. A multidisciplinary, researchfocused, international institution, it leads an ambitious development program with its partners to further promote Bordeaux as a campus of excellence.

Armance Jouteau, PhD student and researcher of Prehistory to Modern Times: Culture, Environment and Anthropology (PACEA) Ministry of Culture Laboratory at the University of Bordeaux, is studying the use and organization of art in the Paleolithic, Lascaux cave in Montignac, France and Cussac cave in Dordogne, France. She is taking a unique approach by using acoustic data with software simulations to discern how Paleolithic people understood their subterranean environment.

Although archaeologists have some measurements of acoustics in caves, the conclusions about Paleolithic peoples’ response to sounds are traditionally based on the perceptions of researchers. Jouteau wanted to contribute information to the field so she and her fellow researchers could be assured that observations and conclusions are not solely based on their feelings. She wanted to produce objective data that can be shared and inform future research projects. 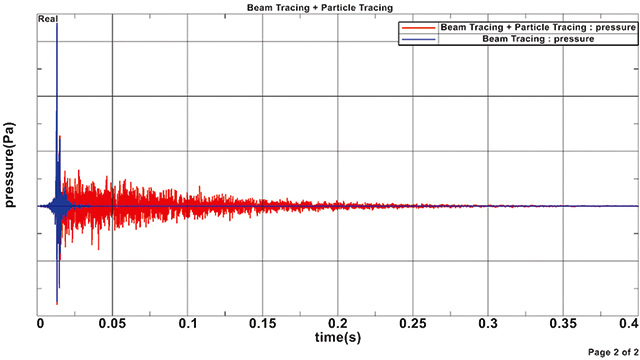 Determining the connections between space, light and sound

Her research focusses on how Paleolithic people localized themselves as sound moved within caves. Light sources were limited in coverage and duration compared to the lights we use today. Therefore, sound would have been the primary way of mapping out their position inside the caves. Jouteau also wanted to identify a connection between the location of major structural pieces and artwork in the caves to the places where sound is distinct. In the past, researchers proposed a direct link between these two elements, but had not proven it.

First, they digitally recreated the cave structure. The Cussac cave was easier because it has not been altered much. However, Lascaux has had several modifications since being rediscovered, especially above ground. In the effort to recreate the Paleolithic ground, another research project is deducing the original morphology of the Lascaux cave prior to its discovery, as well as during Paleolithic times.

The conservation efforts of the Lascaux cave limit its access making it impossible to conduct standard tests and measurements. Standard equipment is disruptive to the cave, therefore, using a digital twin of the cave to do further simulation work is the only way to do this research.

To determine the cave’s shape from thousands of years ago, Jouteau’s team replicated the cave’s morphology just before its discovery in 1940. To achieve this, they examined data from archives, photographs, testimonies, reports, books and archaeological studies. Starting from this morphology, they wanted to interpret the Paleolithic times based on mainly geological, morphological and archaeological data rather than assumptions or feelings.

The goal of Jouteau’s thesis is using modern simulation tools to understand the way Paleolithic people were living and how their paintings related to their location in the cave. It is probable that acoustics were just as important as light underground.

Jouteau and her team used Simcenter™ 3D Ray Acoustics software, which is a part of the Xcelerator™ portfolio, the comprehensive and integrated portfolio of software and services from Siemens Digital Industries Software, to conduct ray acoustic modeling and approximate sound as a beam instead of a wave. This allowed them to simulate the full audible range of frequencies in a computationally effective way. Inside the model, they placed a virtual microphone binaural heads (which reproduce the effect of a human head) in key places from an archeological point of view. Then, they ran the sound simulation and analysed the data both by looking at the response functions and listening to the acoustics effects to compare different locations or configurations. This data can be in the form of an acoustic response or changes in sound pressure. Dr. Nicolas Noé, research and development engineer at the Vibration, Lighting and Electromagnetism Division of the Scientific and Technical Center for Building (CSTB), works with software to simulate sounds and lighting and develops the Simcenter 3D Ray Acoustics solver. He helped Jouteau and her team build the model used in the digital twin.

They validated the simulation results by collecting data from the Cussac and Leye cave in Dordogne, France, which they used as a standard laboratory because it has no archeological equipment. This allowed them to compare the direct-measurement results to validate the simulated results.

Although they had 3D models of the physical structures for the Lascaux and Cussac caves, they had no information regarding how the walls modify sound. Data on how different materials absorb and reflect sound was not readily available. This includes the variations of the types of stone and clay in the caves. Jouteau and her team had to take measurements to characterize the acoustic properties of the walls in the real caves by emitting sound and collecting the data on how the wall shape and materials reflected this sound.

Jouteau states: “Simcenter 3D Ray Acoustics modeling made it possible to conduct objective scientific research.” Jouteau and her team fed their measurements to the digital twin, ran simulations and compared the results to the measurements they took in the cave to validate the data. Going forward, they can apply the same method to other Paleolithic caves, which are much more difficult to gain access to.

“With Simcenter 3D Ray Acoustics, we were able to rapidly simulate the acoustic behavior of the Lascaux cave in its Paleolithic shape. This allowed us to study if prehistoric people used echolocation to move inside.” Says Jouteau. “Without ray acoustics modeling, it would have been very difficult if not impossible to conduct this type of research as the simulations would have taken too long.”

This work contributes to the scientific understanding of digital simulation, which is a new approach for archaeology. Thanks to the digital twin, they were able to understand and hear the acoustic response that was heard by Paleolithic people. 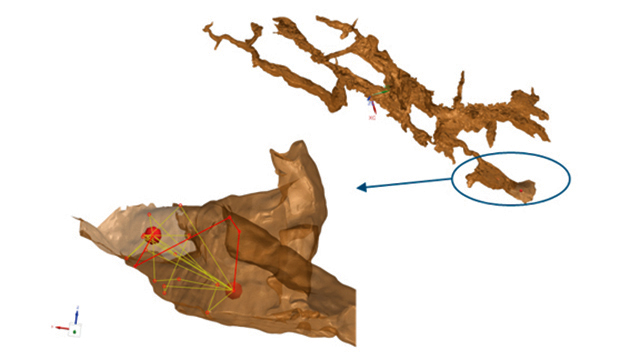