TwinswHeel designs and manufactures droids for last-mile logistics, with the aim of contributing to the future of urban logistics. Its droids can autonomously carry up to 300kg loads. They have embedded artificial intelligence to make decisions regarding movements and obstacles to avoid. It has offices in Lyon and Cahors, France.

We use Simcenter Amesim and Simcenter Prescan for model-in-the-loop tests to simulate the latest developments and verify the requirements defined upstream are met. It takes less time and money than doing it on a real vehicle. Vincent Talon, Chief Executive Officer, TwinswHeel

Simcenter Amesim is the optimal software for multi-domain modeling. It allows us to combine the different physics of the robot and provides robust solutions, enabling us to move forward rapidly. Vincent Talon, Chief Executive Officer, TwinswHeel

Autonomous driving has been at the center of attention and innovation in the automotive sector for the past five years and this continues to be the case. With urban populations rising, movement of people and goods in big cities must be reconsidered. Indeed, online shopping growth plays a role in traffic issues and raises logistical concerns with new regulations and traffic restrictions. The challenge of last-mile delivery is therefore being taken up by many manufacturers. It is considered the most expensive and time-consuming part of the delivery process and needs to be addressed more efficiently.

Capable of moving with little or no human input, autonomous vehicles combine a variety of advanced technologies and control systems. Detecting the environment, identifying the appropriate navigation path or obstacles and interpreting all this requires advanced sensing technology, computer vision, decision-making intelligence and complex mechatronic systems that are not usually incorporated in nonautonomous vehicles. Whether helping to carry heavy loads or solving the curb-to-door problem, a variety of cutting-edge technology is required. 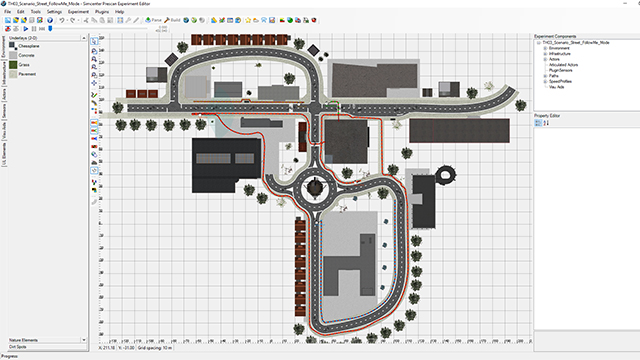 After studying the market and the demand for this new form of delivery, TwinswHeel, a French startup founded in 2015, decided to design a robot that could negotiate city traffic restrictions and receive acceptance in cities. First, they developed the service for enclosed sites such as large factories and warehouses and semi-open sites such as hospitals and shopping centers. Now they are working at a larger deployment in the city of tomorrow to deliver e-commerce parcels or help craftsmen and people with disabilities carry their loads. Their goal is to design and manufacture droids that will contribute to future urban logistics. TwinswHeel’s droids can move in two main modes: collaborative mode called follow-me or in 100 percent autonomous mode.

Coming from the automotive industry, Vincent Talon, chief executive officer (CEO) of TwinswHeel, says it was an obvious decision to create something with wheels to partially fulfill the role of a car. The first prototype had only two big wheels, but to stay competitive they adapted the architecture and created a platform with four wheels, which is closer to automotive and thereby provides benefits of scale.

“The development of our robots is guided by three main concerns: design a safe and reliable vehicle that meets customer demands, keep acquisition and ownership costs under control and shape an object that will generate empathy and therefore public acceptance,” says Talon.

To develop a technologically competitive robot, the TwinswHeel founders have gathered a team of 12 engineers, and since the beginning of the development of their robot, TwinswHeel more than doubled their staff with dedicated engineering divisions for mechanical, electrical, controls and sensors integration domains. 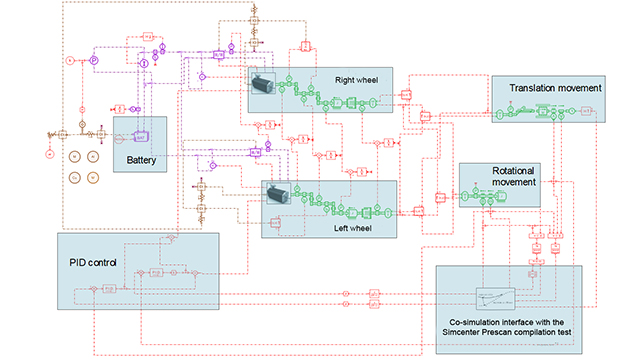 After entering the mature and competitive industrial market, TwinswHeel’s objective was to offer a new service in urban environments.

This droid is a great example of a new zeroemission service. In the city of Toulouse, France, it is used to assist Enedis power grid agents who repair the electrical network downtown, so they no longer enter the city with a van. On the other hand, Franprix Supermarkets uses the robot to help elderly or disabled people carry their groceries. Autonomous droids are currently being tested in Montpellier, France with La Poste (the national mail service) and STEF (European leader in refrigerated transport).

However, with these new applications, safety becomes the number one priority. Even if there are not yet regulations for operating these kinds of robots without human supervision, experiments are planned for 2020. TwinswHeel is working closely with the French government to create these regulations and has been enrolled in pilot projects aimed at analyzing the acceptance level.

So currently, TwinswHeel’s droids are required to meet the same safety levels as an autonomous car.

“We have a greater sensitivity to safety than our competitors,” says Talon. “We respect the standards of motor vehicles because we consider the droid an autonomous vehicle.”

The engineering team had to implement validation plans to check safety requirements. But these plans require millions of runs that are physically impossible to do. The inherent software and hardware complexity, the required massive validation and verification cycles and the growing number and variety of sensors require manufacturers to rethink their development processes. Simulation has become the indisputable innovation enabler for the development of autonomous vehicles. In this realm, the Simcenter™ software portfolio provides solutions and services to enable multi-domain designs exploration, verification and validation for the development of autonomous vehicles at a systems, software and full-vehicle level.

The engineering team had to implement validation plans to check safety requirements. But these plans require millions of runs that are physically impossible to do. The inherent software and hardware complexity, the required massive validation and verification cycles and the growing number and variety of sensors require manufacturers to rethink their development processes. Simulation has become the indisputable innovation enabler for the development of autonomous vehicles. In this realm, the Simcenter™ software portfolio provides solutions and services to enable multi-domain designs exploration, verification and validation for the development of autonomous vehicles at a systems, software and full-vehicle level. 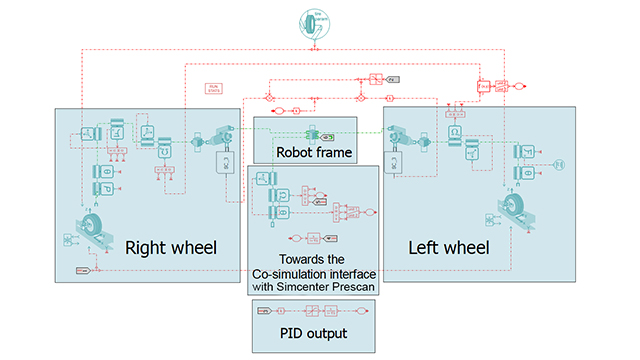 The engineering of an autonomous vehicle requires developing and validating complex sense-think-act functions. This requires an integrated system of systems, with mechanical, electrical and software components. For an optimized design, these components cannot be treated as separate elements, and software and hardware need to be developed in sync to achieve required hardware costs and system performance.

During live experimentations, the droid identifies and encounters many hazardous situations. Information is collected so the user can recreate the same situation virtually or generate a hypothetical one based on expert knowledge. When a critical situation occurs, the last 30 to 60 seconds of all robot sensors data is saved. This information is then used to create a re-useable and configurable Simcenter Prescan™ software simulation scenario.

“Having those scenarios reproduced in a simulation environment using Simcenter Amesim and Simcenter Prescan allows us to build a catalogue of critical case scenarios for validation plans or future developments. The main advantage we find is these scenes are reproducible, leading to much easier iterative work,” notes Talon.

To make decisions based on the environment, artificial intelligence (AI) is embedded in the TwinswHeel droid based on convolutional and deep neural networks (CNN/ DNN) trained with machine learning. Developing and validating the control and software strategies for any situation and environment is key for safety-critical functions and necessitates the use of closed-loop simulation. A typical example of a critical scenario is when a pedestrian suddenly cuts the robot’s trajectory. In the scene shown on the right, the target pedestrian will cross a dense zone from the exhibition room composed of a lot of people and furniture. In this way, it will be possible to test the capability of the droid to manage the different obstacles it will pass. The representation of the scene in the visualizer below has the droid in the green square and the target pedestrian in the red circle. Depending on the location and the distances for the different obstacles, the droid will either stop itself, slow down to 0.5 meters (m)/per second (s) or continue tracking at a regular speed.

A Simcenter Prescan point cloud sensor model simulates the work of a lidar sensor. The sensors’ data is sent to the Simulink environment for calculation and passed on to the perception part. The decision is made at the robot level and then the control part sends the instructions. All this is sent to the Simcenter Amesim™ software model, which interprets these instructions (for example, torque to apply to the two wheels) and provides the new kinematic and mechatronic state of the robot (droid pose) using its physical models. This updated state of the robot is looped back to the Simcenter Prescan environment simulation, which then updates the information captured by the cameras, lidar, etc. 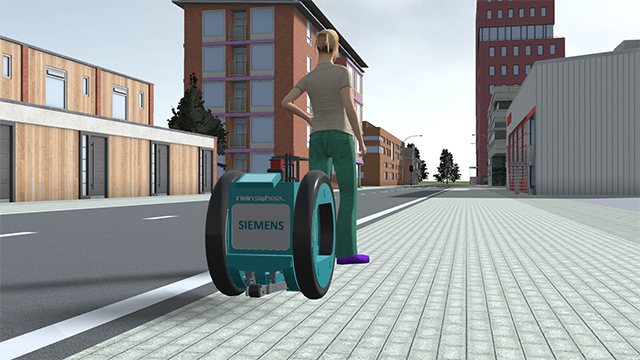 “Many physical domains had to be combined to propose a reliable, robust and functional product to our customers,” says Talon.

Indeed, the droid is equipped with two electric motors, a rotative 360-degree lidar for simultaneous localization and mapping, a stereo camera for target identification and obstacle avoidance and ultra-sound sensors for detailed mapping of close obstacles. Everything is manufactured and assembled internally, except the sensors.

“We use Simcenter Amesim to build models that enable us to select the vehicle architecture – for instance, to size the electric motor – as well as models to design and validate robot controls and for supervisors of artificial intelligence supporting decision-making processes for droid movements,” Talon says.

Using system simulation, startups can develop their solutions quickly by testing multiple variants and choosing the option that meets their needs. They can develop first models when little data is available in order to make first architectural choices, and then when suppliers are selected, it’s possible to build more complex models, including mechanics, electronics and electrics. It enables companies to have complete models for sizing and controls design.

“Simcenter Amesim is the optimal software for multi-domain modeling,” says Talon. “It allows us to combine the different physics of the robot and provides robust solutions, enabling us to move forward rapidly.”

The decision part of the robot is the most complex system. To integrate the sensors, TwinswHeel uses a robot operating system (ROS) that enables it to get the sensors’ drivers and plug them in with the rest of the software. ROS is a network that allows different software components to communicate, whether they are in C, Python, Matlab environment, etc. TwinswHeel creates nodes (software components) in the ROS that can exchange information like the lidar point cloud. Calculating autonomous displacement of the robot’s perception, tracking the master in follow-me mode, localization, path planning and control of the trajectory is carried out in these nodes. 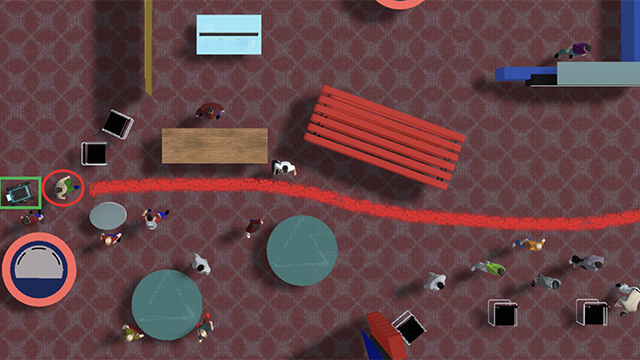 Components are constantly being developed for autonomous vehicles: new features and cases requiring more safety. The biggest challenge for TwinswHeel is to efficiently develop products to keep up with the car manufacturers’ pace. “We are strongly inspired by what the car manufacturers do; we are on the lookout for everything they publish so that we do not search in a blocked path but go directly to a path that they have defined as the best,” says Talon.

The worldwide competition is in full swing, mainly in the United States and China. However, in Europe there are only a few competitors mainly because of the protection offered by patents. This situation leaves TwinswHeel with a lot of room to develop.

Today, with only a few years of experience, the company plans to offer a scalable robot. It will be a common mobile base that can support three platforms: a small version supporting 40 kilograms (kg), a middle-size version for 120 to 150 kg and a big one for loads up to 300 kg.

Tomorrow, if European regulations allow an autonomous vehicle to move around without an operator, how many people will be ready to trade their shopping trolley for a robot?

We use Simcenter Amesim and Simcenter Prescan for model-in-the-loop tests to simulate the latest developments and verify the requirements defined upstream are met. It takes less time and money than doing it on a real vehicle. Vincent Talon, Chief Executive Officer, TwinswHeel