Karlsruhe University of Applied Sciences (HsKA) is a state-owned institution of higher education.

The tool was introduced in sample simulation tasks in the form of a tutorial. Different tasks for different simulation parameters could be carried out. Afterwards, I could slowly work my way up to our problems. Working with Simcenter FLOEFD was very pleasant. Daria Sall, Kühlung und Schmierung High Speed Karlsruhe

Engineering students Daria Sall and Hakan Yigit at the Karlsruhe University of Applied Sciences in Germany are learning first-hand what it’s like using a digital twin simulation to develop a real-life project. For the past few years, they participated in the Formula Student international design competition. In 2017–2018, the team, named High Speed Karlsruhe, took seventh place in the Czech Republic and Hockenheim, Germany and fourth in the overall classification in Spain at the Circuit de Barcelona-Catalunya.

During the competition, each team of students develops, builds and tests a small-scale Formula One™ prototype. The competition is run by the Institution of Mechanical Engineers and uses the same rules as the original Formula SAE with supplementary regulations. The race car design is judged on different race tracks for dynamic (such as acceleration, endurance and energy efficiency) and static disciplines (such as engineering design, cost analysis and business plan). 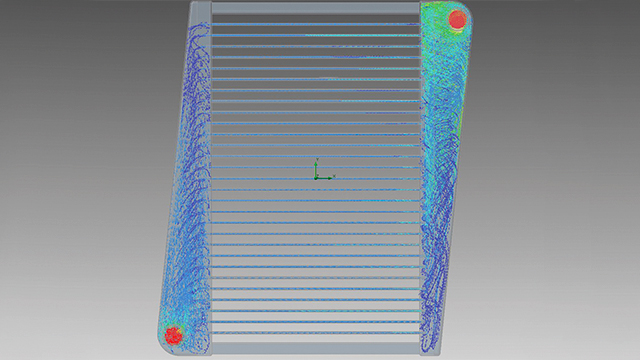 The challenge of short design seasons

The students had some challenges in the design phase. They worked on this project in addition to their demanding study program, and had no time for extensive prototyping between racing seasons. The findings of the previous race season flow directly into the digital development of the subsequent vehicle.

For the dynamic events, they needed to design reliable components that would withstand a high level of stress with parts that were as light as possible. They had to assess the engine’s performance under stress as quickly as possible. With such a high-performance, high-powered engine, the cooling system was one of the most important parts of the race car. 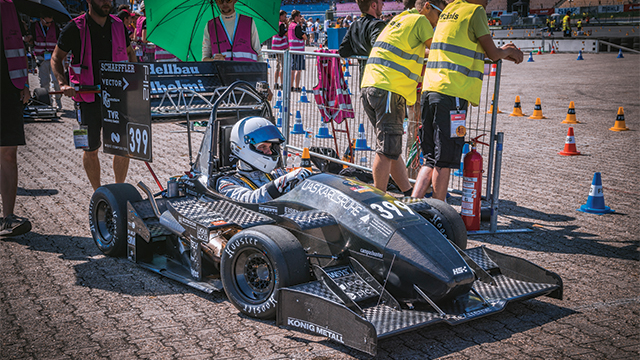 A compromise must always be found between the size of the cooling system and the weight and air drag. Various formulas and calculations are usually involved in the development process of a cooling system, but ultimately the students had to estimate which aspects would be profitable for their race car.

To get the details they needed to make these assessments, they used a PTC Creo™ software computer-aided design (CAD) model with the Siemens computational fluid dynamics (CFD) software, Simcenter FLOEFD™. After two days of training, they were up and running with their own models.

“The tool was introduced in sample simula-tions tasks in the form of a tutorial,“ says Sall, who worked on cooling and lubrica-tion for High Speed Karlsruhe. “Different tasks for different simulation parameters could be carried out. Afterwards, I could slowly work my way up to our problems. Working with Simcenter FLOEFD was very pleasant.”

One example of their analyses deals with the predetermined dimensions and shape of the tanks, which are attached to the radiator net and have an influence on the distribution behavior of the water. With the representation of the flow lines showing the pressure and velocity, they identified and modified the areas of good and bad flow. The velocity distribution of the streamlines was extremely important in deciding between the different tank variations.

Another scenario was the header tank positioned at the highest point of the cooling circuit. The air, which rises from flow losses or overheating, can escape through a pressure relief valve. These air bubbles only accumulate in the middle of the vessel because the tangentially posi-tioned inlets and outlets cause a swirl in the medium. The dimensions of this tank must also fit the given installation space conditions. With the simulation, they were able to improve the design to optimize the swirl in the medium.

The students were introduced to the tasks for the different simulation parameters they would need to perform on their digital twin, which could then be applied to their specific design challenges. The simulation animations helped them to easily and quickly illustrate the problems and the solutions with other team members throughout the design process.

“The simulation animations were very helpful for representing component construction methods to illustrate the problems and solutions for other team members,” says Yigit, head of engine and drivetrain for High Speed Karlsruhe.

The tool was introduced in sample simulation tasks in the form of a tutorial. Different tasks for different simulation parameters could be carried out. Afterwards, I could slowly work my way up to our problems. Working with Simcenter FLOEFD was very pleasant. Daria Sall, Kühlung und Schmierung High Speed Karlsruhe