Hyundai Motor Corporation is a global corporation that has created a value chain based on automobiles, steel and construction and includes logistics, finance, information technology (IT) and services. With about 250,000 employees worldwide, the company’s automobile brands include Hyundai, Kia and Genesis.

Siemens’ Simcenter solutions are considered the most reliable option on a global basis. Our commercial vehicle engineers are proud to use them. Taehoon Lee, Senior Research Engineer Hyundai Motor Company

In the engineering world, performance targets are often in conflict. For example, a lightweight design might offer the best results for fuel efficiency but could negatively impact other performance issues such as noise, vibration and harshness (NVH), handling and ride comfort. Multi-attribute balancing (MAB) is key to addressing complex engineering challenges and safeguarding the balance between design options and functional performance. Thanks to the continuous development of computer-aided engineering (CAE) and system simulation, manufacturers can predict the relative losses across a range of attributes such as NVH, fuel efficiency and drivability. Balance is everything and MAB has changed the game.

The act of MAB enables the user to detect design or construction flaws early on, or even avoid them altogether. The time and cost savings during the development and manufacturing process are far-reaching. Yet, only a minority of original equipment manufacturers (OEMs) use MAB to its full potential.

Taehoon Lee, senior research engineer at Hyundai Motor Corporation, states, “Hyundai Motor Corporation has set a firm goal to create a culture of constantly evolving innovation. Our motto is, “New thinking in automobiles.” Being true to this vision simply requires vigorous and continuous pursuit of the latest engineering technologies.” Hyundai Motor Company has found a trusted partner in Simcenter™ Engineering, which is part of Xcelerator™ portfolio, the comprehensive and integrated portfolio of software and services from Siemens Digital Industries Software. 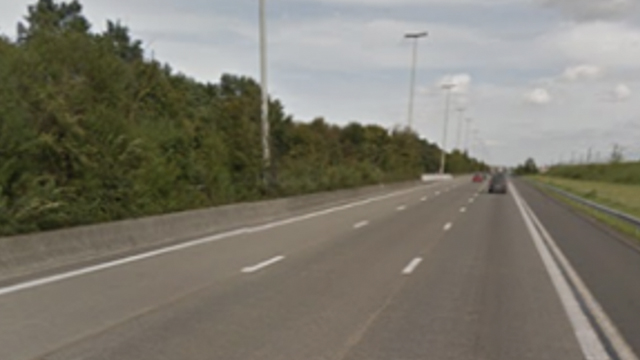 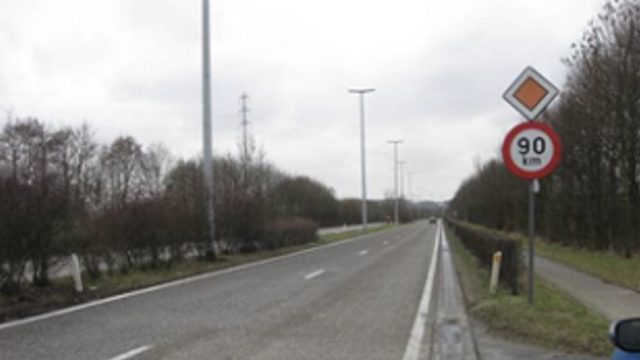 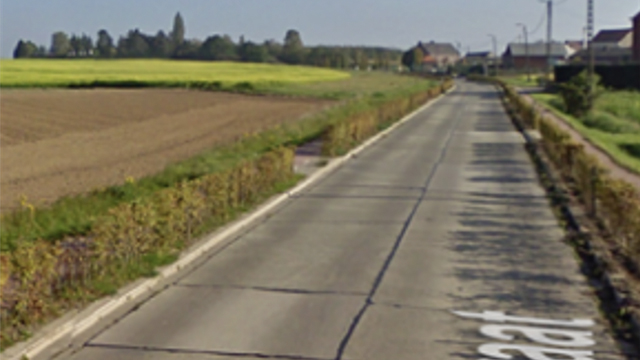 In collaboration with Simcenter, the Hyundai Motor Company team used a methodology that goes beyond troubleshooting an NVH issue. It applied an integrated, comprehensive approach that included competition benchmarking, target setting, design and validation in order to balance handling and NVH along with ride comfort.

Although the project highlights NVH performance, it goes well beyond that scope. Initially, in an unreleased minibus variant, Hyundai Motor Company identified a constant vibration on the rear seats as well as at the driver’s foot location. From the outset, Hyundai Motor Company made it clear that resolving troubleshooting activity was to be part of a unified approach to develop a more harmonized refinement process to balance attributes like handling and NVH along with ride comfort.

In order to do a proper balancing act subjectively and objectively, test and simulation were simultaneously applied to identify the current design issues. Next, the result was validated against the best-in-class competition.

Convinced of this combined test and simulation approach, Lee and his team decided to step outside of their comfort zone. “We were mainly working with Simcenter Testlab, but more recently we are enriching our NVH business by combining test with Simcenter 3D and Simcenter Amesim software tools. This helps us to meet our engineering challenges by harmonizing full-vehicle level performance” says Lee.

Rigorous testing usually defines the beginning of a new test campaign, when benchmarking and target setting takes place. This was done by setting a Hyundai Motor Company prototype van nose-to-nose with competitor vehicles. Next, Simcenter Engineering experts identified the locations that generated the booming noise using the transfer path analysis (TPA) method. This data enabled the engineers to define preliminary countermeasures. During the entire testing campaign, data for populating the future CAE vehicle model was being acquired with dedicated Simcenter SCADAS™ hardware. “I have been using Simcenter software and testing equipment for about 20 years. Simcenter Testlab is reliable and robust and much easier to use than our previous solution,” says Lee. 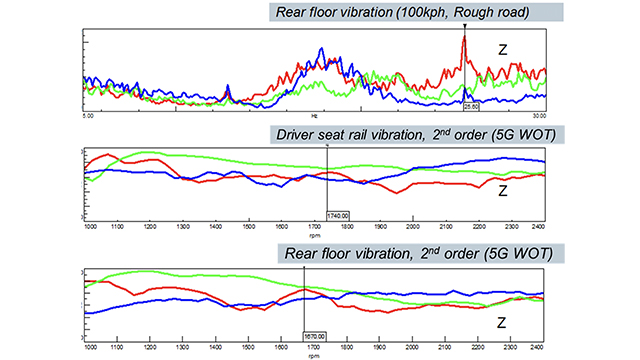 When using CAE, it is essential the vehicle model properly represents not only the dynamic properties of the various subsystems (for example, tires, suspensions, powertrain, etc.), but also the excitation inputs, such as road profile and engine internal loads. These critical data points are often unavailable as input data or take a great deal of effort to be measured.

In this project, dedicated and advanced reverse engineering CAE procedures were used to identify road profiles and engine internal loads to properly populate and excite the 3D vehicle model. In this way, better prediction levels could be reached by using data measured during the test campaign.

The main goals of the CAE phase were to:

A preliminary and extensive design-of-experiment (DOE) study was performed to gain an understanding of which design parameters were the most influential. After this, an optimization process was run based on the response surface model to identify the best compromise for parameters configuration. Using the final optimal sets gained from these processes, the MAB process was performed and validated using 3D models. 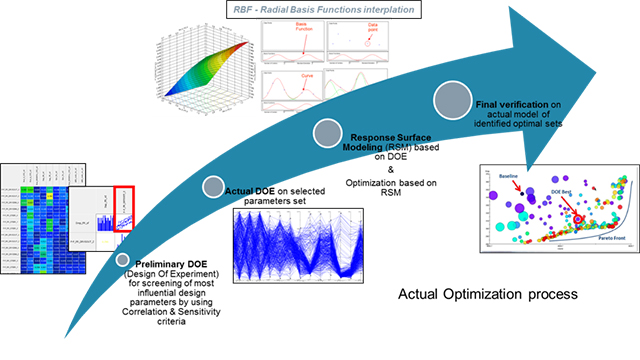 In the final stage of the project, the identified countermeasures at the suspension level were manufactured and tested by replacing the baseline measures. Three vehicle variants were set and their target acceleration compared. The team realized a final relevant improvement of up to -5 decibels (dB) for the most critical points.

This project proved that by leveraging the synergy of combining test and CAE, it is possible to more quickly and efficiently find successful countermeasures to the issues at hand.

Rather than acting at the troubleshooting level, which is often too close to time-to-market, it is more efficient and convenient to front-load issues and improve the design of the chassis and body at an earlier stage in the vehicle development process. If structured chassis and body development involves CAE and test and is defined at an early stage, Hyundai Motor Company can optimize more kinds of performance, even those that may conflict. 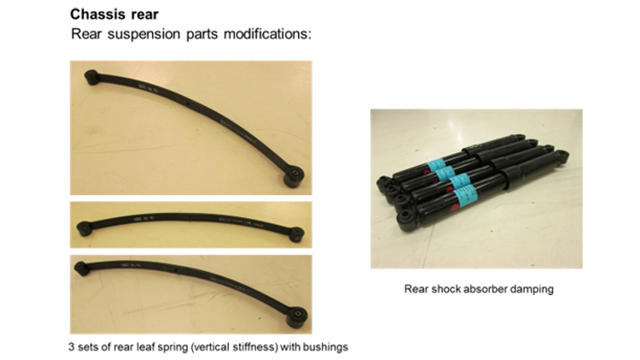 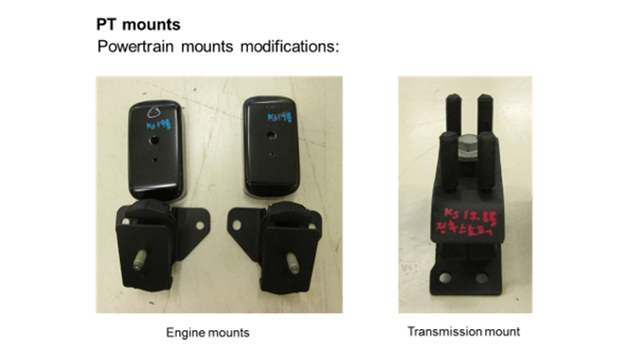 Top of the V-cycle

Every OEM wants to avoid troubleshooting issues at the end the development process. That is why MAB is being considered at the top of the vehicle design cycle or the so-called V-cycle. System simulation allows Hyundai Motor Company to evaluate attributes such as NVH, ride comfort, fuel efficiency, thermal management and the impact of driveline controls side-by-side at the very first stages of development. Moreover, at every step of the decision-making process, attributes can be weighed against each other. As a result, manufacturers can minimize troubleshooting by constantly gauging and confirming the optimal set of parameters. 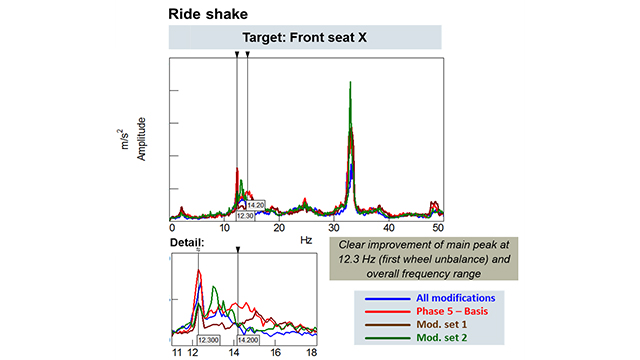 Hyundai Motor Company never doubted the credentials of their partnership. “Siemens’ Simcenter solutions are considered the most reliable option on a global basis. Our commercial vehicle engineers are proud to use them,” says Lee. “The experienced Simcenter engineers have always given us technical confidence and a fitting balance between detail and accuracy. In the past, we have solved many of our problems with their help. We have established a mutual trust and global partnership in which we highly value the Siemens NVH technology, and in particular the Simcenter portfolio. Hyundai Motor Company and Siemens will remain important partners for optimizing NVH in the future.”