Simcenter 3D tools allow us to delete holes and radii below a certain size with only a single command. This significantly decreases preprocessing time. Brian Carrigan, Mechanical Engineer DAA

Design Automation Associates, Inc. (DAA) provides mechanical engineering and analysis automation software consulting services for customers in a variety of industries, including aerospace, automotive, industrial machinery, consumer products and shipbuilding. Founded by three former United Technologies engineers in 1995, DAA has grown to a staff of 20 that supports both large and small engineering projects.

DAA built its reputation by delivering projects at the lowest possible cost on a timely basis. However, that reputation was put at risk on a recent project for CIGNYS, a Michigan-based precision manufacturing company. “Although DAA has been a trusted services provider for CIGNYS, analysis problems on a recent military program caused missed delivery dates, as well as project cost overruns,” says Jeff Shelagowski, CIGNYS executive vice president.

The project required DAA to perform a stress analysis on a new military mobilizer CIGNYS was developing. The requirement was to determine if the mobilizer could withstand the stresses and deflections incurred as a result of being dropped to the ground by parachute. Uncharacteristically for DAA, this project encountered notable time and cost overruns.

“Although CIGNYS and its customer, through daily updates and transparency from DAA, understood the software struggles we were experiencing and were extremely supportive, I felt as though we had let the customer down,” says John Lambert, DAA’s president and CEO. “The resulting scramble to recover, which involved adding multiple analysts and working late hours and weekends, resulted in cost overruns and questions about our company’s ability to foresee and contain problems.” Pulling engineers from other non-CIGNYS related projects also stressed DAA’s resource capacity.

While CIGNYS was dissatisfied with this project, the overall relationship between it and DAA is strong. Accordingly, CIGNYS gave DAA an opportunity to redeem the company’s typically high-value reputation on a similar mobilizer project. Not taking any chances, DAA sought a solution that would alleviate any potential problems. 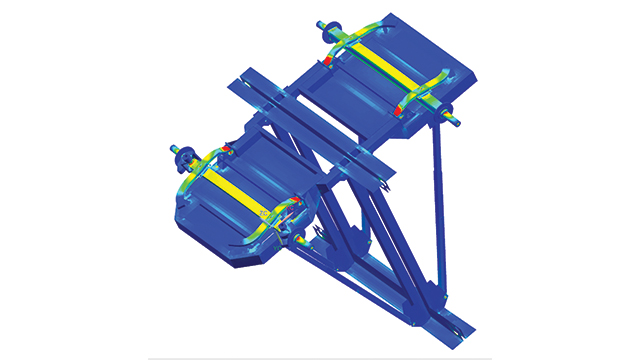 Upon investigating the cause of the project overrun, it became clear to DAA that excessive time was being spent building the analysis model required to run the simulation. Simulation preprocessing is usually the most time-consuming part of the overall simulation process. Analysts are required to repair and/or remove unnecessary details and features from the geometry, build a mesh on each of the geometry components, create connections between each component and then add loads and boundary conditions.

DAA noticed that the analysis modeling phase was taking longer than anticipated. For example, a significant amount of the geometry for the first mobilizer consisted of thin-walled sections, which meant the analysis model required a 2D mesh. DAA engineers had to create mid-surfaces of the solid geometry in order to create the surfaces needed for the mesh. Complicat-ing this task was the need to trim and extend as many as 100 resulting surfaces to connect the mesh together so it would run in the solver. This process alone took 12 hours to complete.

Using DAA’s existing computer-aided engineering (CAE) tools, the entire preprocessing phase for the first mobilizer project took a total of 63 hours for one iteration. That number does not include the time needed to address any design changes. When CIGNYS wanted DAA to evaluate how a proposed geometry change might affect performance, DAA’s engineers spent almost as much time completely rebuilding the analysis model to represent the design change, before they could simulate and evaluate results of the change.

The impact of these processes was that an unacceptable amount of time and resources were required just to get models ready for simulation. This is time that was being taken away from evaluating results and considering design changes that would help make a better product for CIGNYS.

To get control of its simulation process and avoid repeating the issues from the previous project, DAA decided to use Simcenter™ software from Siemens PLM Software for both simulation preprocessing and the actual structural analysis solution. DAA had seen examples of how the powerful geometry engine of Simcenter 3D could potentially improve the defeaturing, mid-surfacing and connection phases of the analysis modeling process.

DAA was also able to reduce the mid-surfacing process to just one hour when using Simcenter 3D, compared to the 12 hours needed for the previous project when using a different analysis preprocessor. DAA engineers achieved these savings because they didn’t need to extend and trim the mid-surfaces the way they did using their legacy tool. NX™ Nastran® software, the embedded structural analysis solver in Simcenter 3D, enabled them to glue edges and surfaces together for all nodes within a specified tolerance. The combination of the strong geometry preprocessing capabilities of Simcenter 3D and the unique connection methods of NX Nastran enabled DAA to reduce the time spent on mid-surfacing the model by 92 percent.

Using Simcenter 3D, the initial simulation preprocessing step was twice as fast as when using the legacy simulation tools. The overall process was sped up even further when design changes were taken into account because, with Simcenter 3D, the analysis model is associated to the geometry. This means if engineers want to investigate how a feature change will impact performance, they simply need to make a change to the underlying geometry and then use Simcenter 3D to update the existing finite element analysis (FEA) model with minimal manual intervention. The results are rapid design-analysis iterations during which DAA engineers can spend more time collaborating with CIGNYS’ design team and making smarter engineering decisions, instead of performing analysis modeling. 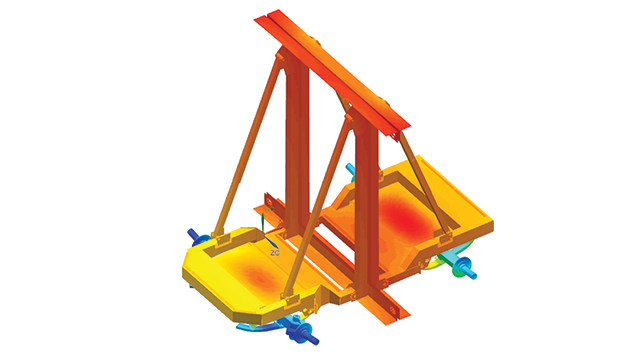 DAA was not only able to significantly reduce analysis time on the current project, but it also noted the opportunity for similar reductions in future projects for CIGNYS. Importantly, the use of Simcenter also helped to solidify the relationship between DAA and its customer. “DAA took real, tangible steps to demonstrate to CIGNYS that future projects will have lower costs and greatly decreased exposure to unreliable and unpredictable solver behavior,” says Shelagowski. “The capabilities provided using Simcenter directly addressed both issues in a substantive way.”

This project also convinced DAA of the advantages Simcenter 3D can offer on future engineering projects for other customers. “The heart of any successful project is the reliability of up-front schedule and cost estimates,” says Lambert. “Anything that increases uncertainty and limits flexibility hurts both the project and the business performance of associated organizations. DAA made significant strides in reducing uncertainty and increasing flexibility using Simcenter.”