The global demand for energy continues to increase. Although renewable energy sources have seen a dramatic increase from 5451 terawatt-hours (TWh) in 2000 to 9824 TWh in 2019, large-scale energy storage is still a challenge. There is a need to continue producing energy when solar panels and wind-power turbines are offline. This role is now leaning on gas turbine engines, fueled by natural gas. Using hydrogen as a gas turbine fuel offers the possibility of clean energy production with reduced – or even no – emissions of carbon dioxide (CO2) and nitrogen oxide (NOx).

However, hydrogen combustion is not simple. Its extreme flammability range and flame speed can cause flames to flashback (propagate upstream in an uncontrolled way). This causes damage to the equipment. Hydrogen also has a higher flame temperature than methane, which can lead to higher production of NOx. In order to keep NOx production low, it is critical to use the right combustion technique. The current combustion method that is being used (wet low emission) injects water into the combustion chamber to reduce the temperature. The water/steam must be free from impurities. Although this method reduces NOx emissions, it is still not efficient enough or environmentally sound. Dry low NOx (DLN) methods offer an alternative in which combustion takes place at a lower temperature due to the right mix of fuel and air. No water is added. In order for this method to be applied to hydrogen combustion, engineers must think outside of the lean combustion – low NOx box and develop new techniques.

Micromix combustion technology is a new approach that aims to produce reliable and safe hydrogen combustion. It emits lower levels of NOx by using dry low emission (DLE) technology. Micromix technology has been in research and development (R&D) since the late 1980s by Aachen University of Applied Sciences (FH Aachen) and the subject of many collaborative projects. Typically, these projects have been between B&B-AGEMA and Kawasaki Heavy Industries, Ltd. (KHI).

Micromix technology is based on two basic ideas. First, to suppress NOx formation, you can either lower the flame temperature or reduce the residence time of fuel/air inside the high-temperature zone of the flame. NOx molecules can only form under certain fuel/air conditions and high temperatures. If the N and O molecules reach colder zones behind the flame before they undergo a chemical bond, they missed their chance.

Early micromix designs used cold flow mixing: a hollow perforated plate filled with hydrogen, which allowed air to transition through the holes. This technology was not easy to manufacture on a large scale and could lead to hotspots at the hydrogen injection ports. The next generation of the design incorporated tubes on the hot side of the plate to control where the air mixed with hydrogen, which aimed to create rich and lean zones that lowered NOx emissions. However, this hydrogen layer was irregular, proving to be impractical and costly. The improved design kept the perforated plate but incorporated larger holes and an air jet. The hydrogen was then injected perpendicularly into the air jet. This design emitted lower NOx levels but also had some issues with thermal stress. The overall assembly of this design was also difficult to manufacture.

Overall, these projects proved the viability of micromix technology. This method removes the possibility of flashbacks as mixing and burning occur simultaneously after injection. However, B&B-AGEMA aimed to refine the micromix combustor to ensure optimal fuel delivery, enhance the fuel flexibility, part load stability, and thermal load and optimize the design for ease of manufacturing. 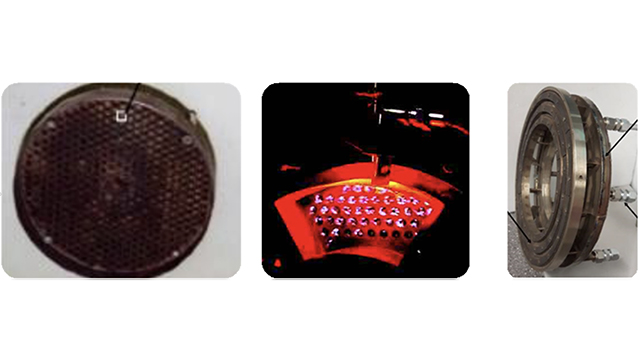 B&B-AGEMA has been involved in the development of micromix technology with partners KHI and FH Aachen, since 2010. To improve on the fourth generation, B&B-AGEMA used computational fluid dynamics (CFD) simulation to both understand the combustion characteristics and optimize the design. The ultimate goal was to reduce NOx emissions from combustion while maintaining an acceptable pressure drop in the combustion chamber. Advanced CFD methods proved to be a game-changer in developing this technology.

Using Simcenter™ STAR-CCM+™ software, which is a part of the Xcelerator™ portfolio, the comprehensive and integrated portfolio of software and services from Siemens Digital Industries Software, B&B-AGEMA performed intensive CFD investigations of the combustor, looking at the aerodynamic flow parameters and the combustion structures. Their goal was to find the optimal design and length of the flame to ensure low NOx combustion and also simplify the design by reducing the number of injectors. The CFD simulations included reactive chemistry to predict the flame shape, size, and temperature signature. This was the first time that B&B-AGEMA used this approach. The results from the simulations closely aligned with the experimental observations from the combustor test bench.

As a result of this research, FH Aachen and B&B-AGEMA developed the fifth generation micromix combustor. Simulation and design exploration became a substantial part of the design loop. Jens Dickhoff, technical manager of combustor design for B&B-AGEMA explains, “We used NX for CAD modeling and Simcenter STAR-CCM+ for reactive CFD simulations. The optimization loop was controlled by HEEDS, so the geometry variation was done automatically. We investigated the response of the flame shape and temperature distribution in the volume behind the combustion chamber based on the geometry changes.”

This approach enabled the team to run more cases than would be possible on a testbed. Dickhoff explains, “Design optimization allowed us to accelerate the design and to find new setups and flame shapes. The CFD simulations with Simcenter STAR-CCM+ have shown a new flame shape with very low NOx properties, which was never considered before.”

Having found this design variant, the team manufactured and then tested a prototype burner, which proved the flames exist and benefit combustor designs. 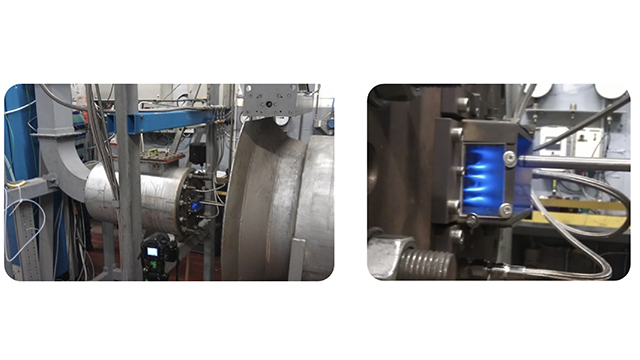 The fuel flexibility of a typical turbine power plant will change in the future, with the shift toward green hydrogen and hydrogen-methane fuel. By running conjugate heat transfer (CHT) simulations, B&B-AGEMA was able to assess the impact of different fuel types on the thermal load of the burner. The simulations include detailed chemistry for combustion and both solid and fluid domains. Dickhoff explains, “There is a transfer of heat from the fluid domain to the hydrogen bar. If you warm the bar, this energy is fed to the hydrogen gas, which in turn increases the injection depth of the hydrogen into the crossflow. This leads to different NOx results.”

This CHT approach improved the correlation between simulation and experimental results and proved the micromix design is fit for a range of fuel types.

Once the micromix burner had been developed, B&B-AGEMA then collaborated with KHI and FH Aachen on a sequence of projects aimed at developing a hydrogen combustion gas turbine for practical use. During this collaboration, B&B-AGEMA has run intensive, numerical simulation projects on the micromix burner, both for verification and design optimization. The team investigated the potential use of large eddy simulation (LES) in combustion simulations. LES is a transient technique where the large scales of the turbulence are solved explicitly and the small-scale motions are modeled. In comparison, steady Reynolds-averaged Navier-Stokes (RANS) methods model, rather than resolve, turbulence. Whether a turbulent eddy is resolved or modeled by the LES scheme depends on the local grid resolution, which means that LES calculations require fine computational meshes and small time steps. This approach can be computationally expensive, but in this case, the results were clear. Dickhoff states: “RANS simulations tend to show a stretched, long flame, but this is not the case for LES. The flame shape matches much, much better with the real flame impression. We could predict NOx values that were very close to the results of the experiment. We have never seen such good results before. They even provided an explanation for a transient phenomenon about which we have speculated and discussed many times based on experimental and steady RANS results. With RANS results we just had our tendencies correct. Now we have the quantitative values and transient behavior that are also correct.” 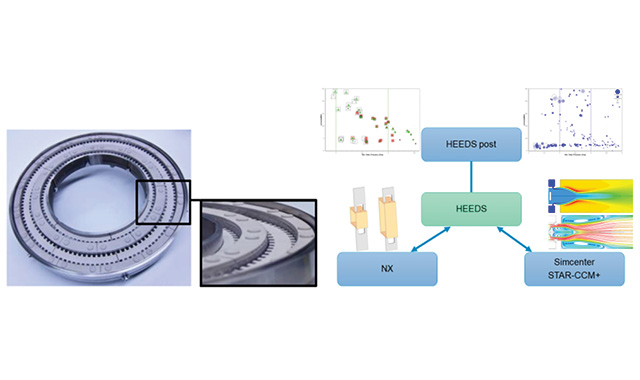 Throughout the micromix design process, B&B-AGEMA also developed monitoring tools. One example is the air-cooled borescope: This is an optical monitoring device equipped with an infrared or white light endoscope that is inserted into the combustor to monitor the flames. The Borescope has to be able to withstand high temperatures within the combustor that reaches more than 1450 degrees Celsius (°C).

B&B-AGEMA combined CHT simulations and finite element analysis (FEA) on the borescope geometry to predict stress curves and lifetime for the component. They simulated a range of alternative designs, aiming to optimize the internal cooling pathways and ensure structural integrity. The prototype for the final design successfully operated in both high-and low-pressure combustion tests. These tests used the new hydrogen combustor from KHI which included micromix combustion technology. 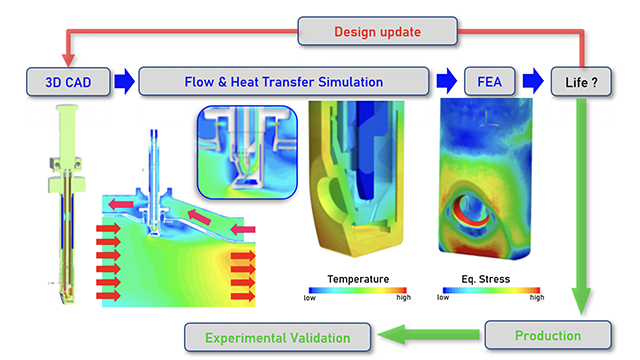 Figure 4. Engineering workflow of the air-cooled borescope development for micromix flame visualization (white light and infrared) inside the gas turbine combustor end for the engine application.

From theory to reality: the world’s first DLE turbine

The overall goal of this project was to design a 100 percent hydrogen-fueled combustor, which was easy to manufacture, safe to operate, and kept emissions within acceptable limits. The target was to have less than 35 parts per million (PPM) NOx at 100 percent hydrogen from a 50 to 100 percent load, with low NOx values at part-load operation. Additional requirements included a stable ignition all the time, no flashback risks, and an acceptable pressure drop of 3.5 percent. With their intensive program of CFD simulation and design optimization using Simcenter tools and benchmark validation, B&B-AGEMA, KHI, and the FH Aachen created a micromix burner design that successfully met all these targets. Simulation was key to its success. Dickhoff comments: “For B&B-AGEMA, the Siemens software portfolio is the clear market leader for turbine and combustor flow, chemistry and heat transfer analysis.”

The micromix design was patented by B&B-AGEMA and KHI in 2016. Thereafter the focus was on implementing this new technology into industrial turbines. On July 21st, 2020, the New Energy and Industrial Technology Development Organization (NEDO) and KHI announced the successful demonstration of the first DLE 100 percent hydrogen-fueled gas turbine under commercial operating conditions in the port of Kobe, Japan. Dickhoff sums up his thoughts: “We are very excited to see this and we are also very proud to be part of the Hydrogen Road of Kawasaki. This is a great achievement on the way into the carbon-free future for electricity production based on hydrogen technology.”