With our old software, you could see the facets in the 3D print; not with NX. Its precise geometry delivers a much more realistic finish. Matt Landolfa, Lead Mechanical Design Engineer Unlimited Tomorrow
PROBLÉMY KLÍČE K ÚSPĚCHU VÝSLEDKY

Unlimited Tomorrow’s mission is to empower amputees with an intuitive, scalable model to create personalized devices from start to finish. It delivers an affordable, next-generation prosthetic arm using a custom, remote-fitting process that is fast and easy and the user never has to leave home.

With our old software, you could see the facets in the 3D print; not with NX. Its precise geometry delivers a much more realistic finish. Matt Landolfa, Lead Mechanical Design Engineer Unlimited Tomorrow

A teenager starts a medical revolution

Easton LaChappelle was 14 years old when he decided to build a fully functional hand. Growing up in the tiny mountain town of Mancos, Colorado, LaChappelle had only 23 people in his eighth-grade class. Bored, curious and fascinated with robotics, he quickly surpassed the limits of what his school could teach him. “I started holing up in my bedroom, surfing the internet and teaching myself everything I needed to know about robotics,” LaChappelle says.

LaChappelle decided that making a remotely controlled robotic hand would be a fitting challenge for his passions. Cobbling together a MacGyver-like assortment of household items – fishing wire, Legos, electrical tape, windshield wiper motors, whatever he could find – he spent nine months of relentless trial-and-error, and in his words, “failing pretty hard.”

Eventually LaChappelle created a rudimentary robotic hand, but it wasn’t until his 16th birthday that he began advancing his design – and setting the course for his unlikely future. That’s when he bought a cheap lasercut wood 3D printer and started running it 24/7. He improved the hand’s individual finger motion and its opposable thumb. Then he moved on to the forearm, elbow and shoulder until he had a complete arm.

LaChappelle entered his robotic arm in several science fairs – and that’s when his fortunes took off. Having a Transformer-like arm that could throw a baseball and shake hands was slightly more attention-grabbing than your typical exploding volcano. Soon LaChappelle was doing an internship at NASA. Then President Barack Obama was shaking hands with his robotic arm at the White House. Before long, LaChappelle was traveling the world giving keynote speeches. 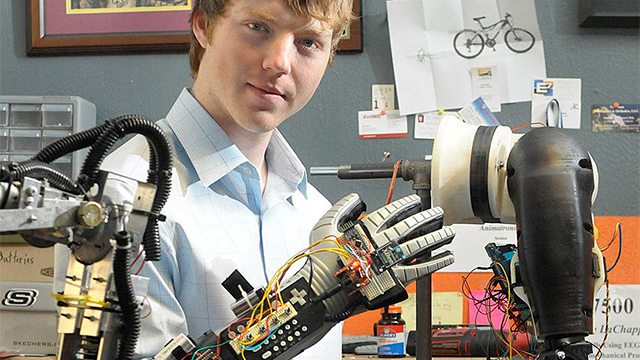 A surprise source of inspiration

All that happened in 2013 and as heady as the media recognition was for a smalltown teenager it was a quieter moment that year that had the biggest impact on LaChappelle. “I was at the Colorado State Science Fair,” he recalls, “when I noticed this little girl examining the finger motions of my robotic arm. I realized she was wearing a prosthesis. That was the first time I ever saw someone with that type of technology.”

LaChappelle started talking with the girl and her parents to find out how her prosthetic arm worked. What he learned both disheartened and inspired him. “I found out that her prosthesis had cost $80,000, only had a pinching device and would soon be outgrown because it had taken a year to create. I thought, ‘this can’t be true; I built my arm for $300 in my bedroom.’ It was unacceptable to me. That was my aha moment.”

A month after that moment, LaChappelle was invited to give a Technology, Entertainment Design (TEDx) talk in Denver, Colorado. Speaking about the promise of affordable, personalized prosthetics, LaChappelle got a standing ovation from the crowd and a call from renowned motivational speaker and life coach Tony Robbins. “He said to me, ‘I’ve helped people all around the world psychologically,’” LaChappelle recounts. “’I’ve always wanted to help them physically – and you’re the man to do that.’” In February 2014, two months after LaChappelle’s 18th birthday, Robbins provided startup capital to launch Unlimited Tomorrow.

LaChappelle quickly learned that as advanced as his robotic arm was, he would have to take it to new heights of innovation to disrupt the arm prosthetic market – particularly for the patients he wanted to help: children like that seven-year-old girl who had inspired him.

For one thing, the arm LaChappelle built weighed eight pounds. A typical child’s arm prosthetic weighs anywhere from two and one-half to four pounds – and even that is too heavy for many kids. “The heartbreaking statistic is that half the people who have an arm prosthetic don’t wear it,” says Sean Jones, vice president of business development at Unlimited Tomorrow.

Then there’s the issue of timing. Children grow out of their prosthetic arms nearly as fast as shoes. Some will go through four or five devices before they become adults – all at a price of around $80,000. The process of ordering and getting fitted for a device can take six months alone; by the time a child gets their new arm, they may have already outgrown it.

Reducing weight and accelerating development were just two of the technical hurdles Unlimited Tomorrow had to overcome. Lowering the exorbitant cost of a prosthetic arm was obviously a third. But LaChappelle and his engineering team faced an equally important challenge of delivering a device that young users would feel comfortable wearing, not just for functionality, but because of how it made them feel. “For some children, the utility of their prosthetic arm is functional; they want to do things they couldn’t before,” Jones explains. “For others, it’s psychological; they want to fit in. We realized early on that we needed to create a personalized prosthesis that matched a child’s opposing arm as closely as possible.” 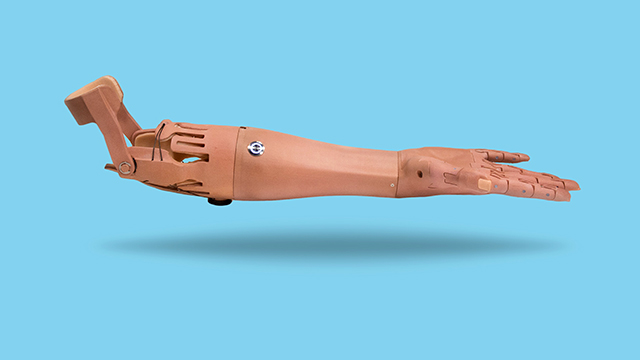 Fast forward to 2019, when Unlimited Tomorrow introduced TrueLimb, the industry’s first lightweight, affordable multi-articulating prosthetic limb with a realistic appearance. TrueLimb devices weigh 1.1 pounds, three pounds lighter than a typical pediatric prosthetic arm. They’re personalized for each user, right down to size, skin tone and fingernails. At $8,000, they’re drastically less expensive than conventional alternatives. And perhaps most amazing of all, children can get TrueLimbs in weeks – without ever leaving the comfort of home.

How has LaChappelle and his team managed to disrupt the prosthesis industry so dramatically and quickly? The answer is by bringing together a confluence of advanced technologies – remote 3D scanning, electronic sensing and additive manufacturing.

Unlimited Tomorrow’s direct-to-consumer approach begins and ends in the customer’s home. The company ships a 3D scanner to a candidate; a friend or family member takes a 3D scan of his or her residual arm and provides photos of the opposing arm for matching purposes; the candidate selects from 450 different skin tones and then he or she sends the information back to the company. Unlimited Tomorrow then 3D prints the TrueLimb and ships it to the user, who receives it five times faster than in the traditional process. 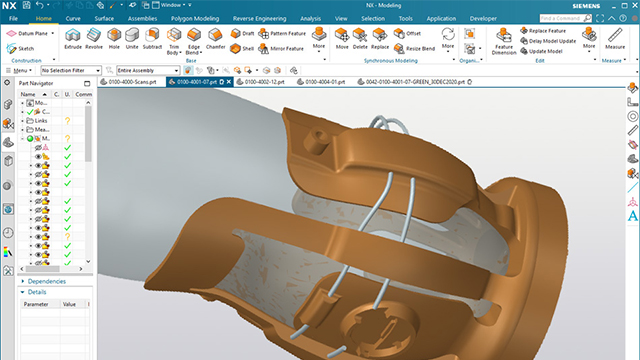 The value of additive manufacturing

Although a host of technologies are critical to the success of TrueLimb – not the least of which is the proprietary muscle sensing technology that gives users multi-grip functionality and individual finger control – additive manufacturing has been equally indispensable. “I’ve been pushing the envelope with 3D printing since I was running that cheap printer in my bedroom,” LaChappelle explains. “We tried a variety of machines over the years, but we were struggling to find one that was durable enough to withstand patient use and personalized enough to blend in.”

Enter the HP Jet Fusion 580 Color 3D Printer. “We were the first company in the U.S. to receive a 580,” says LaChappelle. “We probably have more mileage on these machines than anyone in the world. It gives us a perfect combination of material strength and color precision.” 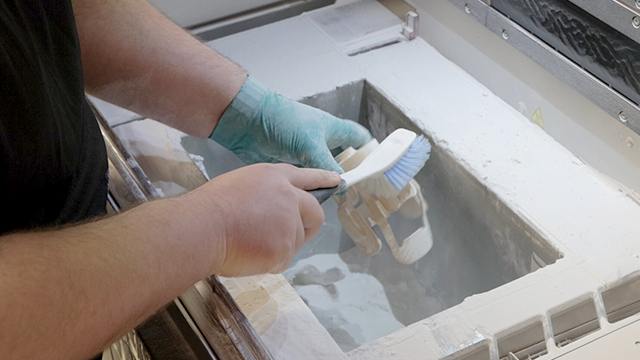 Even with all the advanced technology it was bringing together, Unlimited Tomorrow faced one technical challenge that was jeopardizing its ability to scale TrueLimb for its market. The most important piece of an arm prosthetic is the socket that attaches to a person’s residual limb. Not only does it contain the sensors to activate hand motions, but it’s also critical to prosthetic comfort.

Unlimited Tomorrow engineers were having trouble designing their sockets for the personalized fit their users needed. Matt Landolfa, lead mechanical design engineer, explains: “With our previous workflow, we’d get a 3D scan of a user’s residual limb, load it into our CAD tool and combine it with a generic socket model. Then we’d use another software to morph the generic model to the scan. The process was slow and it was hard to modify the results. Often, we had to redo the process with no guarantee it would work the next time.”

Given the number of customers Unlimited Tomorrow had and was planning to have, reducing the quantity of test sockets was critical to scaling its business. They needed software that could help them produce personalized sockets in a more efficient manner.

LaChappelle was skeptical there was software on the market that could solve their problem. Then he had a chance encounter with a Siemens AG executive at a conference. “We set up a meeting with the NX product engineering team,” LaChappelle recounts, “and on that very first call, I told them, ‘Look: I don’t think NX or any other CAD package can help us. What we’re asking for is really, really hard.’”

NX is part of the Xcelerator™ portfolio, the comprehensive and integrated portfolio of software and services from Siemens Digital Industries Software.

Over the course of the next few months, engineers at Siemens proved LaChappelle wrong. Working with the Unlimited Tomorrow engineering team, Siemens consultants developed a solution leveraging NX™ Product Template Studio software. The new solution combined automated optimization with rules-based parametric design to give Landolfa and his team much greater control of the socket geometry.

One of the keys to the success of the new socket design workflow, according to Landolfa, is the associativity of the geometry. “Since the solution is all in one system, if we have a tweak that we want to make we don’t have to restart the process like before.”

The system’s simplicity is particularly important to Unlimited Tomorrow’s business. As they scale up to meet growing demand, they plan to remove the existing clinical oversight of engineers using NX and instead have clinicians operate the software. 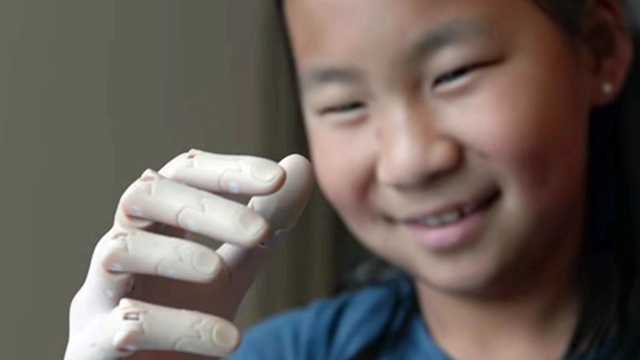 The power of NX for personalized scan-to-print applications wasn’t the only advantage Unlimited Tomorrow gained from the software. NX Additive Manufacturing software is tightly connected to HP’s 3D printers and tuned for industrialized additive manufacturing. To Landolfa, the impact of NX is visceral: “NX delivers a much smoother output from the HP 580,” he says. “We strive to give our customers a TrueLimb that feels natural and looks aesthetically pleasing. With our old software, you could see the facets in the 3D print; not with NX. Its precise geometry delivers a much more realistic finish.”

That extends beyond the socket of the TrueLimb to every other component of the prosthetic arm. Unlimited Tomorrow is in the process of moving the design of all components into the NX environment. And they’re also exploring the NX automated nesting capabilities. “We’re on the cusp of scaling up in a dramatic way,” LaChappelle says. “Before we get there, we’ll need to optimize the throughput from our HP 580’s – and that’s where automatic nesting will come in.” 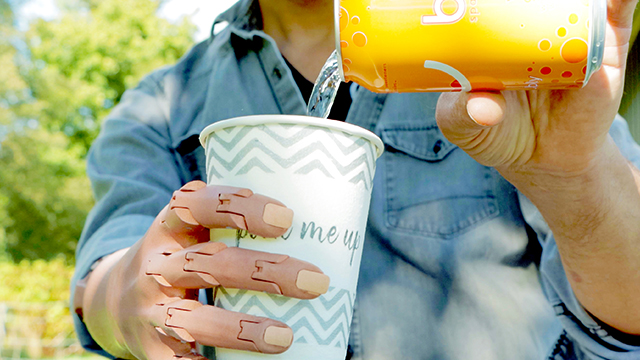 What does the future hold for Unlimited Tomorrow? LaChappelle, who turned 25 in late 2020, has ambitious goals. “If you told me seven years ago when I was alone in my bedroom building that first robotic arm that I’d be where I am today, I’d never believe it,” he says. “Now, having gone through the experience, I’m much more intentional about what we can accomplish. We’re always asking that foundational question: ‘How can we build a business to impact the lives of 40 million amputees globally?’

“That’s the larger play here. And that means significantly ramping up operations. We’ll be depending on technologies like 3D printing and additive manufacturing software to keep pace with us as we go on this journey.” 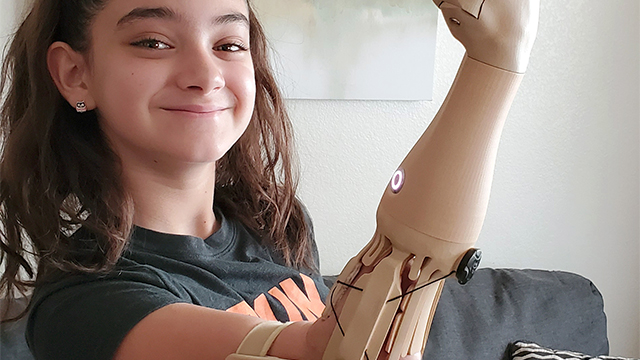