Simcenter is really fast and, in the same day, we could do many iterations. Stephane Arsenault, Head of FEA Department Précicad

Another Précicad client is Aluminerie Alouette, a Canadian aluminum smelter that came to Précicad with an interesting request. Part of the smelting process involves the injection of direct current (DC) into alumina powder. The current creates a strong static magnetic field – so strong that regular internal combustion engines can’t operate in some areas of a smelting facility. Aluminerie Alouette uses electric utility vehicles in those places to transport people and equipment. Until recently, however, those vehicles were made of steel, and Aluminerie Alouette, which produces aluminum, thought it would be better to have electric vehicles made of aluminum. In addition to showcasing Aluminerie Alouette’s product, they could design the vehicles for easier recycling – an important consideration for a company that cares about the environment.

Précicad’s challenge was to design and manufacture a small fleet of electrically powered utility vehicles with bodies and frames made of aluminum instead of steel. Aluminerie Alouette requested a loadcarrying capacity of 1,000 pounds. In terms of timing, the smelter was at the point where it needed to replace its existing vehicles, so Précicad agreed to have a working model ready within six months to a year. 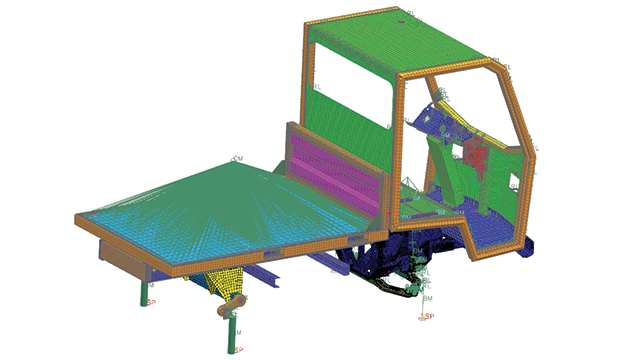 Précicad has a number of computer-aided design (CAD) solutions. For the modeling work on this project the company decided to use SolidWorks® software from Dassault Systèmes SolidWorks Corporation. Because finite element analysis (FEA) would be critical to the development of the vehicle, Simcenter™ software from Siemens Digital Industries Software also played an important role in the project, particularly Simcenter 3D software, Simcenter Nastran® software and Simcenter 3D Thermal software for FEA. Précicad has used these solutions for nearly a decade, supported by the Siemens PLM Software reseller, MAYA Simulation, which provides specialized training, continuous application and technology support, flexible commercial terms and more.

After meeting with Aluminerie Alouette representatives and making sure they understood all the requirements for the vehicle, Précicad engineers used SolidWorks to model the vehicle geometry. Then they imported the SolidWorks assembly model into Simcenter 3D, where they simplified the geometry, created the finite element mesh, applied loads and indicated boundary conditions. “There’s no problem importing the SolidWorks data, and it’s really fast to do the FEA preprocessing work using Simcenter 3D,” says Stephane Arsenault, head of Précicad’s FEA department. “It took a couple of days to analyze smaller components and about a week to analyze the entire assembly.”

Some of the load cases that the engineers evaluated included gravity, braking, turning and acceleration. The engineers followed an iterative process in which they went back and forth between design and analysis, using analysis results to optimize the design. “Simcenter is really fast and, in the same day, we could do many iterations, such as evaluating different material thicknesses,” Arsenault explains. Rather than going back into SolidWorks, the engineers often made the geometry modifications using Simcenter synchronous technology, working directly with the Simcenter 3D analysis model. “That saved us a lot of time,” says Arsenault. “The Simcenter user interface is friendly and it’s really easy to introduce geometric modifications.” 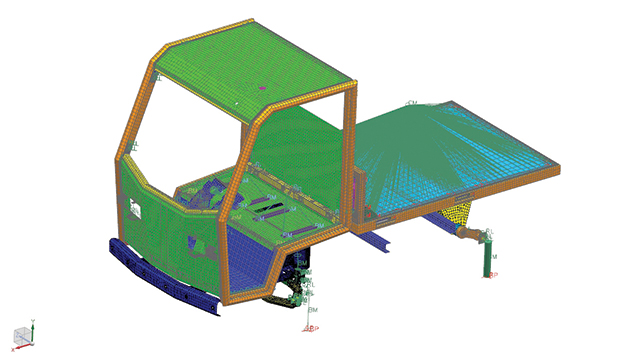 Using Simcenter on this project enabled Précicad to create a utility vehicle that was ready on-time and more than met its requirements. Précicad had a working prototype ready to show the customer in six months. The vehicle they created met its load-carrying capacity of 1,000 pounds (although in the current design that has been increased to 1,500 pounds). That vehicle weighs only 1,500 pounds, which is half the weight of the customer’s steelframed vehicles. The weight Précicad was able to eliminate through the material change and the use of Simcenter 3D is paying off for the customer by allowing the battery to run longer before it needs to be recharged.

Another design improvement achieved with Simcenter 3D significantly reduced production costs. “Our original structure was mostly welded, but that was very costly for us,” says Stephan Lachevrotière, head of Précicad’s design and modeling department. “With the help of FEA, we designed our own extrusion and reduced the number of welds by 60 percent.”

With fewer welds and more mechanical connections, the vehicle, which is called Kargo, is easily dismantled for recycling. In fact, in the user’s manual, Précicad describes what can be done with each part of the vehicle at the end of its life.

The Specialty Vehicles and Transportation Equipment Manufacturers’ Association awarded its grand prize for innovation to Précicad for the Kargo project. Précicad decided to continue manufacturing the vehicle and to make it available for other industrial applications. The Kargo is available in four configurations: the base model, one with dropped sides, one with a tilting platform, and one with an enclosed cargo box. 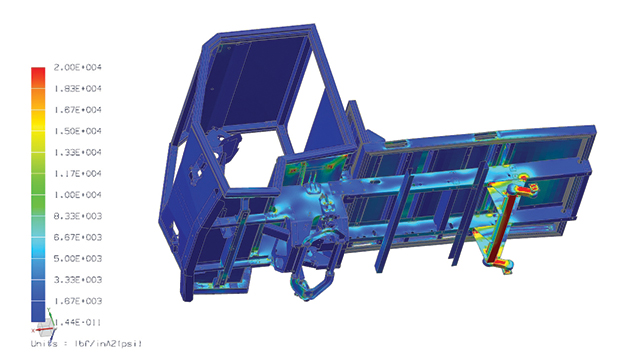 Simcenter is really fast and, in the same day, we could do many iterations. Stephane Arsenault, Head of FEA Department Précicad