MRO is very important to our business, and gets more so every day as we continue to leverage its capabilities. The Teamcenter service lifecycle management solution and service asset management module are a critical part of that.” Jim McKenzie, Engineering Applications Manager, Hendrick Motorsports
PROBLÉMY KLÍČE K ÚSPĚCHU VÝSLEDKY

MRO is very important to our business, and gets more so every day as we continue to leverage its capabilities. The Teamcenter service lifecycle management solution and service asset management module are a critical part of that.” Jim McKenzie, Engineering Applications Manager, Hendrick Motorsports

Hendrick Motorsports fields between 10 and 20 race engines a week in the NASCAR® Sprint Cup, Nationwide and Camping World Truck racing series. The company supports multiple engine configurations for each series, and each engine configuration is used by multiple teams each week.

Tracking bills of materials (BOMs), options and variants for computer-aided design (CAD), and then translating that to physical parts and assemblies is a daunting and critical task. Additionally, the physical parts must be tracked at all times to maximize the performance of each component individually and as part of a system, and avoid part failure due to overuse.

“Using Teamcenter to manage all this data has been crucial to our success over the years,” says Jim McKenzie, engineering applications manager at Hendrick Motorsports. “It isn’t just one or two things that the software offers to highlight; it’s everything from the 55 custom business objects we created using the Business Modeler Integrated Development Environment to the out-of-the-box problem reports and issue management functionality that make it so easy to document and find issues and failures. MRO is very important to our business, and gets more so every day as we continue to leverage its capabilities. The Teamcenter service lifecycle management solution and service asset management module are a critical part of that.” 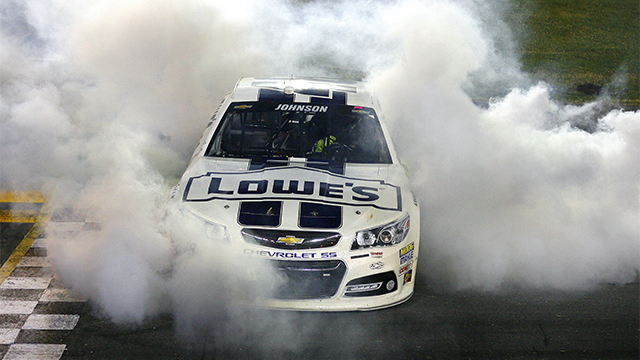 Hendrick Motorsports aims to provide the fastest, most reliable engines to its own teams as well as the teams that lease engines from them. The objective is to win races and championships for Hendrick Motorsports, and maximize customer satisfaction for the external teams. To achieve that goal, they must structure, organize and search an enormous amount of data, including tracking configurations of cars and engines, multiple configurations within a series, and multiple series and teams for supported vehicles.

The use of Teamcenter service lifecycle management and its MRO (maintenance, repair and overhaul) applications enable Hendrick Motorsports to capture and manage the physical configuration of every engine and vehicle, along with test and race results, to determine what works best. Knowing the exact configuration of every engine and vehicle helps trace problems when they occur.

For instance, the team has used Teamcenter MRO technology to expand its failure investigations from just digital design evaluation to a more comprehensive review, including data related to part sourcing, physical part usage and events such as cycles experienced at test sessions and races. With Teamcenter, failures can be traced by session type and propagated through appropriate BOM structures and related to configurations that have been used (prototypes, production, options and variants within those areas). 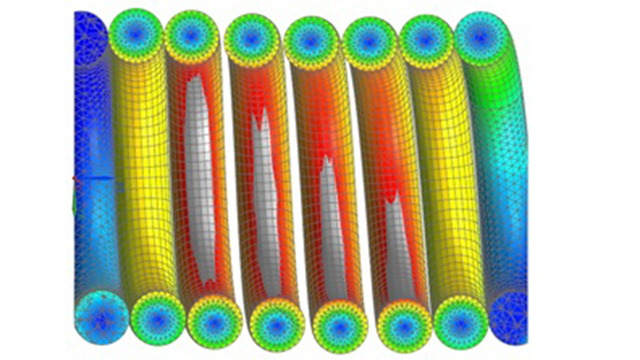 Traditionally, auto racing has shunned formalized processes and taken a much more seat-of-the-pants approach, so the philosophical leap that Hendrick Motorsports has made to support its underlying infrastructure needs, while concurrently embracing a multi-year program to evolve into a full user of MRO practices and technologies, is quite impressive.

They are focused on completing full digital models of the engines and chassis, defining the neutral structure and moving toward serialization usage in the part lifecycle models, and bringing it all together using Teamcenter. This has required Hendrick Motorsports to make a commitment to a formalized structure/data model and recognize that standardized business practices need to exist throughout the organization.

Putting engines and chassis together over 36 weekends a year for multiple teams requires rapid action and turnaround. Problems identified on Sunday may literally have to be investigated, analyzed, resolved, fixed and deployed to the proper assemblies in weeks, if not days.

Further, the fact that the team is dealing with different tracks, series and events (track testing, dynamometer testing, race events, etc.) means that there are a multitude of configurations and variants being used in the fleet. All-in-all, this represents a fairly complicated set of issues to structure a solution around. Additionally, the solution has to be vetted, training has to be developed and the technical tools and processes have to be rolled out to more than 300 users of the systems without affecting the team’s need to be consistently successful on the track.

The ultimate goal is to have a one-stop shop in which the engineering team can get all of the information in one place, be it from the track or the manufacturing floor. 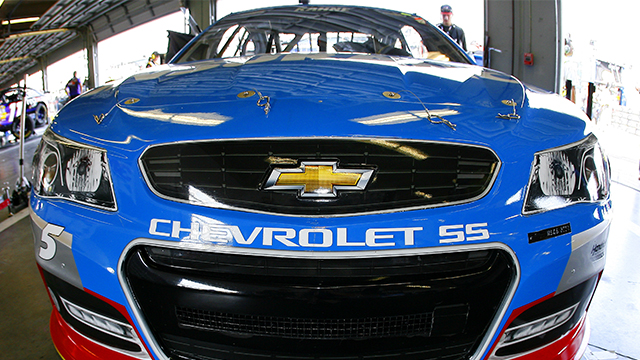 During the June 30, 2012 race event at Kentucky Speedway, Hendrick Motorsports experienced a catastrophic engine failure in the number 39 car. Upon diagnosis of the failure, a fractured wrist pin was discovered in the debris. The wrist pin is typically a part that survives intact through even the most severe failures. Because of this abnormality, the wrist pin was submitted to an independent metallurgical laboratory for failure analysis. The laboratory determined that the material used in the wrist pin had defects that caused inconsistent mechanical properties within the pin. As a result of these defects, the life expectancy of this part was diminished.

Since wrist pins are mission-critical components, they are serialized for batch tracking and cycle counting. Hendrick Motorsports was able to work with the supplier of the part and determine the exact heat of material that was used to make the pins. Once the heat was determined, part batches containing material made from that heat could then be flagged.

“Since the wrist pin is a cycle-counted part, we could use Teamcenter and its part usage history functionality to investigate the parts from these batches to establish a reliable cycle limit,” says Tad Merriman, engine engineering manager at Hendrick Motorsports. “This reliable limit was critical as the number of affected parts was great enough that a wholesale change wasn’t possible due to a lack of availability of replacement parts. Knowing the safe limit allowed us to continue to use affected parts up until their limit, maximizing the value of the parts as well as allowing time for replacements to be produced.”

Armed with this information, Hendrick Motorsports could relate these batches to the serial numbers of the parts in the field and remove them from service at the appropriate cycle count. This included removing engines already installed in race vehicles and replacing the wrist pins as there were parts in service that exceeded the reliable limit. 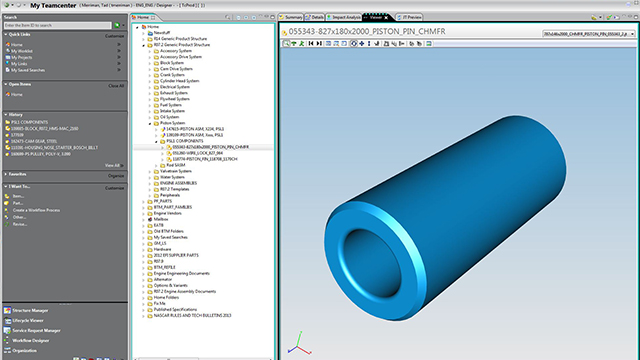 During the August 19, 2012 race event at Michigan Speedway, the team experienced multiple valve spring failures across multiple engines. Valve spring failures are among the most common failures that racing teams see as it is one of the most highly stressed components in the engine. This high stress makes these parts much more susceptible to variations in materials, processes and usage.

As is customary for failed valve springs, these parts were sent to an independent metallurgical laboratory for failure analysis. The results of the analysis showed high-cycle fatigue as the failure method, which is typical for this part. While the failure method was considered normal, the quantity of the failed springs was abnormal, especially considering this part had been in service for an extended period with minimal issues.

As these failures were uncommon with this particular spring, Hendrick Motorsports began an investigation into possible causes.

“By using the Teamcenter service lifecycle management solution and its applications capabilities, we were able to track the batch codes of the springs that had failed, and were able to work with the manufacturer to determine that the finishing processes of these batches had, in fact, differed from what was desired,” says Merriman.

A second factor in the failure of the springs was an increase in duty cycle at the race track. Michigan Speedway had been re-paved prior to the race and the fresh pavement led to an elevated amount of grip on the tires. The additional grip allowed for higher corner speeds and, as a result, a significantly increased duty cycle on the engine and valve springs.

“This additional duty cycle created the conditions necessary to exacerbate an already compromised valve spring,” says McKenzie. “This was an ideal situation for us to implement the Teamcenter service discrepancy’s different severity levels.

“While these failures weren’t ideal, they have provided the opportunity to improve our analytical and physical testing tools to better predict and prevent these types of failures. As a direct result of these failures, we have been able to develop dynamic analyses of the valve spring and can replicate the location of the failure within the spring with great accuracy.

“We have also used the track data from a qualifying lap at the Michigan race event to drive our firing and non-firing test equipment. This allows us to use a real-world worst case for testing the durability of not only valve springs, but other components of the engine as well.

“Teamcenter service lifecycle management technology has played a critical role in enabling us to track all this information and put a more reliable car on the starting grid.” 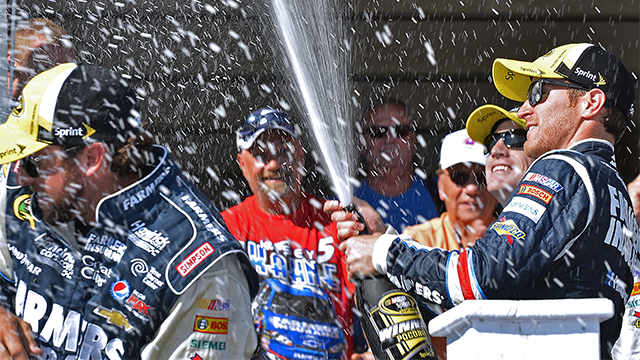